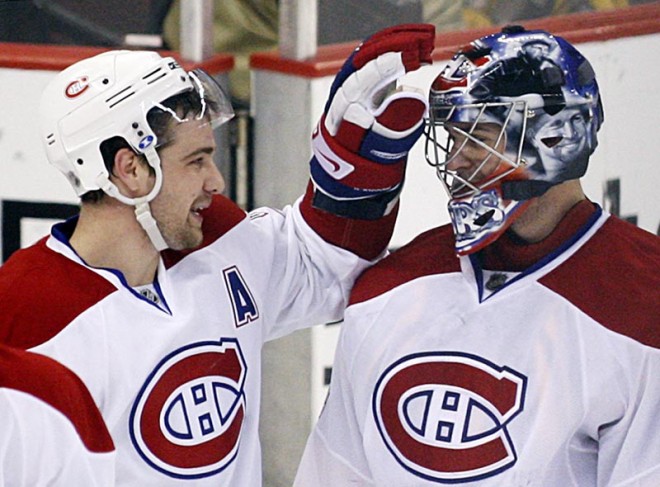 I'll admit, I was expecting a one goal game. A win, squeaked out under the circumstances, by the slightest of margins.

I was not expecting the Canadiens to totally shut down and almost dominate the Senators by throwing their pace off with such a strong command.

Then again, this team has surprised many this season.

Northeast Division Champions has a nice ring to it for now, but it is simply a soon to be forgotten benchmark along the road to a higher goal.

Yesterday I posted on what I felt the Habs needed to do to beat the Senators, and much of it worked out like I hoped. It went like this:

"What the Habs need to do from the drop of the puck tomorrow night is have some control of the game, preferably in an unadventurous mode. They need to approach this game knowing full well that they will be facing the Senators team that took 40 minutes to show up last Monday and not the one they were busy routing 7-1 before Ottawa woke up."

"With the opponant having the last line change, it will be a terse game for the Kovalev line. Don't expect the trio to shake Mike Fisher's trio from their shadows all evening. Maybe Bryan Murray will spin a reckless marble and line the Spezza trio against that of Plekanec, but I would be astonished to see it. With the last line change, Carbonneau would be happy to get that matchup and play strength against strength, but it will occur only infrequently."

"Learn a more patient game against Ottawa for starters. Force them into mistakes first, because they will make them. The Canadiens need to get better a winning in a different way other than simply relying on offense." 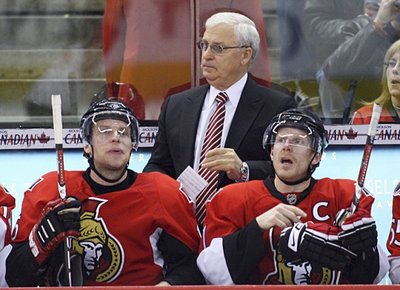 What I truly didn't foresee, was Bryan Murray practically playing into Carbonneau hand by running the Spezza line against Plekanec's trio. By doing this, Ottawa missed out on taking advantage of Koivu's absense. Murray confirms what I've always thought of him as a coach - and it ain't much.

Truth be told, this win astounds me. It is one of the more convincing wins the team has posted this season, and a real eye opener to me for many reason.

There are many things that were seen in this game that need to be appreciated. Here are some random thoughts on players performances, not in just in this one game, but generally speaking as of late. 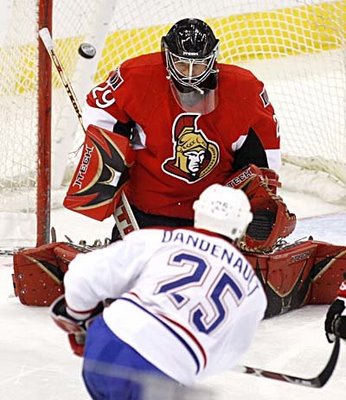 Bryan Smolinski, much maligned by myself and others this season, has started to bring solid efforts more often. He's winning faceoffs, he's more concentrated on his coverage, and overall he looks like a player finally understanding the system he is playing in. I find he's in the way of things, properly positioned, rather than being clued right out like before. He's throwing a little more weight around too, but still could be more physical. He also seems to be more dedicated to helping out in his own end. He and linemates Begin and Kostopoulos are one damned good fourth line when they are in sync, and they showed in against Ottawa.

The Josh Gorges for Craig Rivet deal looks like a steal one year later. Gorges has adapted to the Canadiens style of play, and brings a poised performance almost every game. He's gotten quite swift at getting the puck out of his zone thanks to big improvement in his one on one play. With Max Pacioretty garnering raves at Michigan state, this could turn out to be a whopper of a good trade. 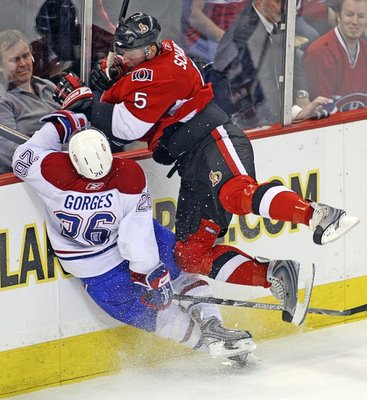 Alex Kovalev, without the puck, was intensely aware of his opposing line all game. It was odd to see him slow down the game's pace at times, when the situation called for it. With Spezza and company being Ottawa's main threat, I saw Kovalev take the puck when no offensive opportunities were present, and simply dump it contentedly. He sacrifices his usual game for the benefit of the team in this one, and still came out with a goal and an assist. His selflessness personified leadership and his desire to foil and shut down the Sens big guns was one of the main reasons the Habs won this one so tidily.

The most underrated aspect of the Canadiens game right now is their penalty kill. It ranks somewhere around 12th in the league, but I'd best it's near the top in terms of the last 20 games or so. 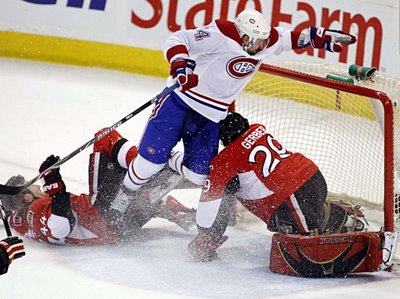 Carey Price had possibly his best game in Canadiens uniform tonight. In my mind, he is far and away the NHL Rookie Of The Year - period. Consider what he has been handed. No other first year player was as anticipated as Price has been. Not only has he delivered more than adequately, he bumped the solid Huet from the starters role, and when given the heady task of carrying his team despite his young age, he not only did so, but led his team to a first place charge. There are other great rookies this season - Kane, Toews, Mueller and Backstrom have all had very strong rookies campaigns. For the most part, each of those names were snuggly fitted onto weak teams were they could easily begin their careers with top line status and a great deal of ice time. Neither of their teams look playoff bound. None of their accomplishments rank with Price's.

Maxim Lapierre reminds me more and more of Doug Risebrough all the time. Max is a player who knows his role and loves fullfilling it. He has a knack for making big game plays a la Claude Lemieux too. He's a keeper.

Sergei Kostitsyn has a lot of homework to do if he is ever to become a regular center. That's not a knock, just a note. He was impressive in many other ways against Ottawa, for his pestulance and determination. Seeing him in Chris Neil's face almost gave me chills! Goog God this kids gonads must take up a lot of his weight! Full credit to his for it.

I wished the official had stepped into the Markov Spezza tilt just five seconds later! 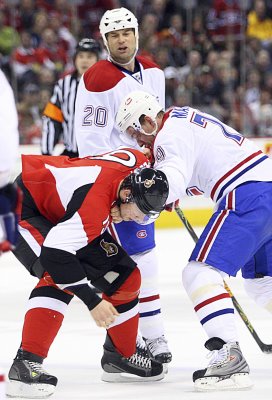 The Canadiens overall, epitomized that notion of team toughness against Ottawa, without succumbing to indiscipline. They took hits to make the right plays rather than avoiding them and they never backed down from physical challenges.

What it showed was that not only aren't they easily intimidated, but that such a ploy rarely works against them.

If Bryan Murray had seen clips of the Habs versus the Bruins or Flyers, who are a combined 0 for 12 with such tactics against Montreal this season, he might have taken a different tack.

The Canadiens don't instigate a whole, act bullish, or drop the gloves much, but they raraly coil and are always standing tall when challenged. I see it as presnting a real poser for teams who think they can rough them up.

Did you see Price slyly take his glove and tilt Chris Neil's helmet down over his eyes from behind? I've never seen that before, have you? 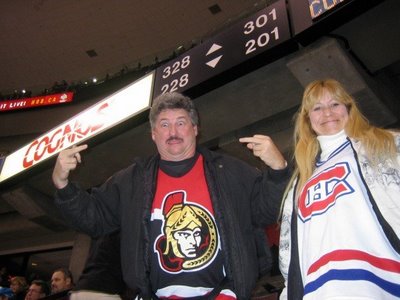 In my car, after the game, I listened to Guy Carbonneau's press meet and he was apologetically cheery at some points. He actually said so much and noted all the hard work of two years and the satisfaction that he felt for the team and its accomplishments - not something you get from a coach in Montreal very often!

Now wrapping up first place in the Northeast is a monster achievement, but it really represents the end of one journey and the start of another. The Canadiens have continuously surprised this season - can they continue to do so?

Not to get too far ahead, but they have just earned themselves two rounds of home ice advantage in the playoffs. Their showing in the next two games may result in them gaining a third round advantage as well - and it could be precious if the team they face then turns out to be Pittsburgh.

That's not looking too far ahead - that's what is at stake right now.

A desperate Sabres team awaits, followed by the always thorny Maple Leafs, and the Habs must remember that they cannot count on their injured players to be there. Other injuries will happen as well.

For the time being, there is little to celebrate yet, in the big picture.

In real terms, the Canadiens just beat a down and out, confused opponant. Nothing to pound chests over, really!