One down, three to go, or if you like, one down and fifteen to go!

A solid 4-1 win by the Canadiens in game one of this series revealed little in terms of new wrinkles on either the Habs or Bruins side.

Yes, the playoffs are a different season, but the Canadiens defeated Boston in the same manner, and using the same elements, as they have all season long.

The Bruins can work hard all they want, throw everthing they can at the Habs, but they just do not have the elements in place to conquer the Canadiens game.

There are many reasons that Montreal have won all nine contests over the Bruins this season, and they all have to do with possessing what Boston badly need. 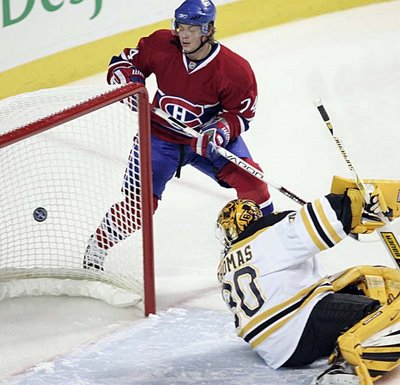 Montreal play on speed, toughness and discipline, while the Bruins counter with lunchpail grit and rough house tactics.

Perhaps the reason Boston is so confounded when it comes to the Canadiens is that they do not play good catch up hockey. Montreal have scored the first goal against the Bruins in all nine wins this season.

Boston also doesn't have the fleetfooted defenseman capable of halting the Habs within the guidelines of the rulebook.

The Canadiens pounded the Bruins, pouncing on every loose puck, shoot in, and rebound with almost reckless abandon in this game. The Bruins were outshot, outhit, and outplayed. It must be that their game plan involves getting the lead before their system comes into play. Maybe they need a game plan wherein getting a lead is not primordial, but is based on patience and discipline.

Still, the Bruins cannot suddenly manufacture a game that rivals the Canadiens for speed and creativity, and that is why this series could be over in four straight games.

It would not make for a pleasant birthday gift for likeable Bruins goalie Tim Thomas, who will turn 34 next Tuesday.

What was very obvious tonight is how much of a special team the Canadiens are to watch these days. They are truly firing on all cylinders. Thanks to great team depth, clutch role players, and a lustful appetite for winning, the Canadiens seem prepared to win in whatever manner presents itself. 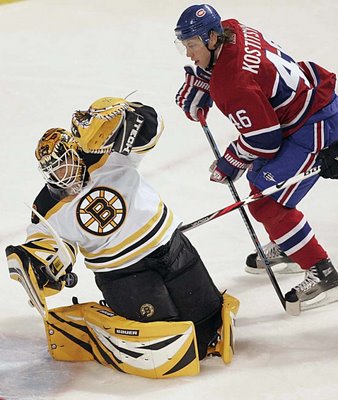 Carey Price could have yawned through most of this game, aside from the half dozen scuffles at his feet. It makes sense to try to bump and bother a smaller goalie, but with Price, who is not easily rattled, it would make more sense to screen him from six feet out.

Considering that the Habs won without needing Price's heroics, Alex Kovalev's highlight reel performances, or any power play goals, and the Canadiens domination over the Bruins gets clearer. Saku Koivu, Ryan O' Byrne, and Francis Bouillon were scratches that will eventually bolster this lineup.

The story of tonights game was the Habs carrying bigger lunchpails than the Bruins and outworking them for three periods. Andrei and Sergei Kostitsyn scored the third fastest goals by brothers in NHL playoff history to set the tone early and place the Bruins on their heels. The Steve Begin, Bryan Smolinski, Tom Kostopoulos trio - I dare anyone to name a better fourth line right now - continues to impress at both ends of ice and give bonus offensive contributions.

On winning teams, especially the successful playoff variety, it is often singled out that a team's best players must be their best players at this time of year. The flipside of the coin is that despite what headlines suggest, it is teams that win Cups, and not merely outstanding individuals alone.

The Canadiens contributions are coming from all places, and not always the most evident ones.

It's a good sign, because it is a long hard road where many contributors will be needed.

In a grander scheme, this game represents but one win. It wasn't as hard as it will get later. 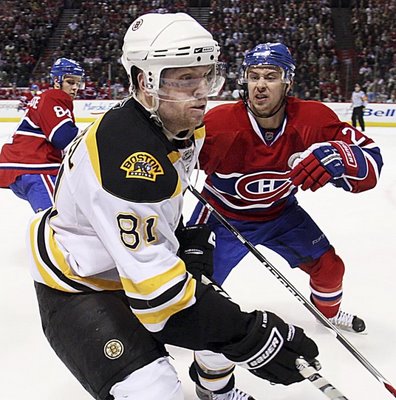 An interesting side note to game one:

The Bruins Marc Savard, who broke into the NHL with the Rangers in 1997, was playing in his first ever playoff game tonight after 659 regular season games. Savard, a cottonball of a player if I ever saw one, was but a Hurricanes victory away from being on his way to owning a dubious NHL record. Had Carolina won their final game against Florida, it would have bumped the Washington Capitals into 8th place and the Bruins out of the playoffs. Savard would have then needed another season's worth of games to get another shot at the playoffs. Savard would have surpassed Guy Charron, current record holder and former 1970 Canadiens rookie who went onto a coaching career with the Flames, the Canadian National Team, and one time Habs assistant coach, who played in 734 career games without ever sampling the playoffs.