Share All sharing options for: Habs Lured Into Playing The Bruins Game 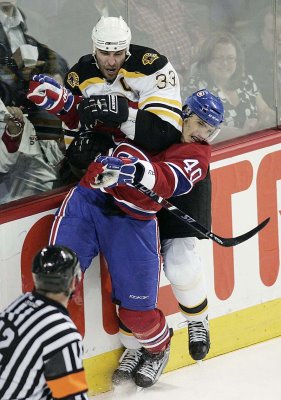 This wasn't in the script!

The Canadiens and Bruins series is turning into the nailbitter no one expected - not in wildest dreams.

There are many colliding viewpoints on how this series has gone so far, and some of them aren't kind to the Canadiens. It has been stated that it has been the Bruins who have dictated the style of play since game 2, and that analysis isn't far off from the truth.

It's no cliché that the playoffs are a different season, it is a fact.

"Nothing is ever won in advance", is a second cliché that gets worn out but has been proven correct of late.

The playoffs are an emotionally packed pressure cooker, filled with expectations and frustrations where each action is magnified, exaggerated, and overplayed. There is intensity in every individual moment. The momentum of a game can change dramatically with one error.

Despite leading 3-1 going into last night's game, the Canadiens play has resembled the Bruins game more than their own since game 1. The Habs have maintained a slight edge so far, in beating the Bruins at their own game. 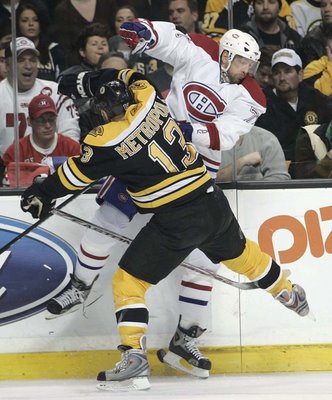 The Bruins method, that has been working for them in keeping games close, is that when all else fails, deploy the trap.

After losing 13 consecutive times to the Canadiens, Boston has nothing to lose by following this recourse. The Habs game is one of speed, and clogging the neutral zone has thrown a wedge into the Canadiens gears.

At the onset of the series, the Bruins virtually announced that their plan was to hit the Canadiens at every turn.

Somewhere along the way, the Canadiens decided that they would impose their physicality upon the Bruins instead. It might have been a mistake to throw the emphasis on countering Boston's game, especially since it is the Canadiens who successfully swept the season series 8-0.

Here is what the shots on goal and hits per game totals look like after 5 games. 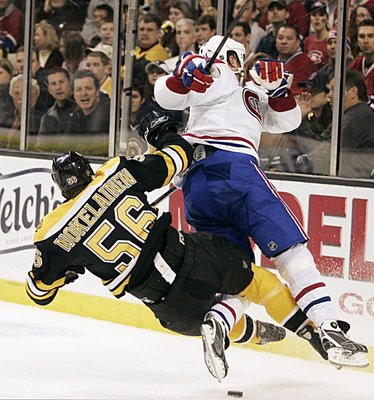 Now here are 2 interesting questions to be drawn from these stats:

If Boston, who planned to outhit Montreal, are not doing so, could it be that the Bruins have had more puck possesion time than the Canadiens?

If Montreal are outshooting Boston, with an average of over 30 shots a game, why aren't they converting at a better rate than only two goals per game?

Simply put, the Bruins have managed to get Montreal off their game.

The Habs have been lured into hitting everything in sight, when they should be being more selective.

It has been noted that Steve Begin and Mike Komisarek are throwing their weight around, and should be, but the entire team has gotten involved and that isn't always the best manner to proceed.

If the Bruins are throwing less hits, it is because they are being more selective.

There is no stat to count 2 on 1 or 3 on 2 scoring chances, but the Bruins seem to have had the greater share. 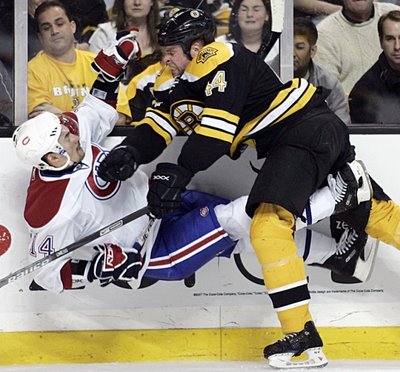 That the Canadiens are outshooting the Bruins should be of no surprise, but the Habs are unavailable to convert rebounds as the player who ought to be crowding the crease is just leaving the corner boards when shots are fired.

As much as the Canadiens have proven that they are able to play a physical game, the long and short of it is that they are not playing THEIR game against the Bruins.

As pedestrian as it sounds, speed and dump ins, beating the Bruins to the puck, are still the best method of breaking the trap. The Bruins will allow the Canadiens to hit them all they can as long as it continues to take them out of the play. With dump ins, that is the play, and the Habs willcease to get nipped at the blueline or swarmed in the neutral zone. Right now, they are trying to get too creative at the wrong places on the ice.

The theory is that hitting wears an opponent down, but it actually takes more effort and energy to throw a hit that it does to receive one willingly. Considering that it takes little effort or stride to absorb a hit, if player concentration is there, the puck will still pursue an opposite path.

It all boils down to being selective rather than random.

Reckless abandon has no place in a game of chess..