Habs For Breakfast - A Wild Way To Start Things Off

Share All sharing options for: Habs For Breakfast - A Wild Way To Start Things Off 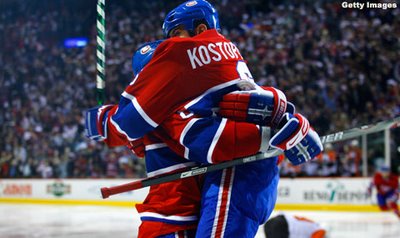 Man is this series is going to live up to it's billing! Talk about drama and turning points.

Game 1 was one of those games that just had it all, from swift shifts in the games pace to spectacular goals and controversial calls. Lots of very strange goals too.

Everyone is talking about the Kovalev bat in goal like it was a blown call - it wasn't from what I saw. This didn't get much mention, but the trajectory of the puck after Kovalev swung at it, went straight into the net as if along a flat line, parallel to the ice. Kind of hard to do if he were to have made contact above the cross bar,isn't it?

I've searched for clips of the goal to find the one aired briefly and showed it in slow motion but I could not find it. I'd just like to see it over again once more.

The Flyers third goal by Joffrey Lupul's goal bothered me a good bit, as it stood to be the game winner for much of the third period. It was reviewed as well and to me, you could see a clear motion with his leg when the puck hit. Lupul didn't kick it in. With his skate firmly planted in the ice, you could see a motion between his knee and ankle that pushes the puck toward the goal. In other words, he used his shin to direct it. It was obvious.

But, with calls like that, you win some and you lose some.

What strikes me really funny with all this is the perception that the Flyers let one get away and Montreal again were the lesser team on the ice. What a load!

The Habs never quit in this one. The Flyers for their part, scored only one goal with their sticks proper. If they are counting on breaks such as this to give them a pair of goals and keep them in each game, they are in for a short series.

"T.K. continues to show the soft hands of a scorer - he's got three in his first-ever playoffs - and the hard body of a banger who's only too happy to play the physical game. "But as exciting as it is, we don't want to get ahead of ourselves," Kostopoulos added. He said he'd flip through the channels when he got home in the hope of seeing his winning goal. " - Dave Stubbs

"For the record, Jeff Carter uses a Bauer composite hockey stick. And, just so you know, he has no plans on changing brands. Carter, a Philadelphia centre, was beaten by Saku Koivu on a faceoff late in the third period last night. Almost immediately, Carter's stick broke, deeming him virtually moot on the play. Alex Kovalev jumped on the loose puck and beat goaltender Martin Biron with a laser high to the glove side. Only 28.6 seconds remained in regulation time and the score was now tied, 3-3." - Herb Zurkowsky

"The better team in the standings won this opener, but not the better team on the ice last night. A chap named Saku Koivu, who set up the tying goal that sent the game into overtime, rolled his eyes when he was asked about it in the team's gymnasium. "Too close," he muttered, "too close. But you know ... emotion plays a big part in this. You're coming off a tough series with Boston ... you're going through emotional highs and then it's gone. I know we've got to play better than we did tonight, but when that emotion falls off the table, it's pretty hard to get it back right away. I guess we had it at the end," he said. " - Red Fisher

"Habs captain Saku Koivu, a cancer survivor, arranged for three tickets for Sousa's family after he heard about her wish. Saku's wife normally has two tickets reserved for herself and a guest, said Sousa's grandson, Bryan Frois. But Thursday the family found out Koivu had arranged for a third ticket to Game 2 of the semifinal playoff series against the Philadelphia Flyers." 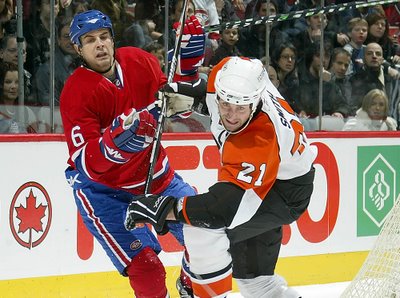 All The makings Of A Dream Series - Globe Sports

Whose dream is this, anyway? Pick a number. Start with the obvious, No. 31 in the Montreal goal, a 20-year-old rookie sensation from Vancouver who has the Zamboni resurface his veins between periods. Carey Price has taken the Montreal Canadiens into the second round in his pursuit of repeating what another untried youngster managed 37 years ago, when Ken Dryden came out of nowhere to steal a Stanley Cup." - Roy MacGregor

"It was a weird game," said Kostopoulos, who, for the second series-opener in a row, played the role of hero. He had a goal and an assist in the first-round curtain-raiser against the Boston Bruins, and added his first career NHL playoff overtime goal last night." - Tim Wharnsby

"A lengthy review upheld the goal. The key language in Rule 80.4 on disallowed goals is "where the puck made contact with the stick." In this case, the contact was above the crossbar. The goal should not have counted." - Tim Panaccio

''Hard work by my linemates created the turnover and Markov made a good play to get the puck on net,'' added Kostopoulos, who is in the playoffs for the first time in his six-year NHL career. ''Biron made a good save on the first shot and I was lucky to get the rebound.'' 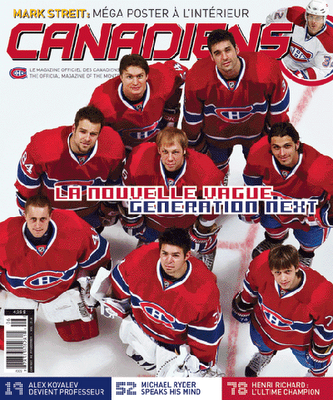 "A lengthy review upheld the goal. The key language in Rule 80.4 on disallowed goals is "where the puck made contact with the stick." In this case, the contact was above the crossbar. The goal should not have counted." - Tim Panaccio

"His situational awareness is something else. Alex scored PP and a SH goals tonight, both of which were such good, heads-up plays. He looked much more active tonight than he did for most of the Bruins series as he no longer had the big Zdeno Chara keeping a watch on him. He basically did what we needed him to do tonight - score exactly when we needed. He tied the game up twice with two very good goals proving that he always knows exactly where the puck, the net and the chances lie. Not many people would have scored the goals he did tonight; he is the main reason we are now not trailing this series by one." - Tobalev

"Two games were played tonight. The one Bob Cole saw, which was Philadelphia all over Montreal most of the game. And the one the rest of us saw, which was a couple of posts hit by Montreal, a penalty shot, a shorthanded goal by Kovalev, a couple of comebacks, overtime, a dramatic goal by ultimate warrior Tom Kostopoulos, and a pretty tip-in by Patrice Brisebois, which was, unfortunately, into his own net." - Dennis Cole

"Turtleplek fires a shot on Biron while penalty killing, which is deflected up. Kovy, following the play, swipes it out of the air and the refs call a goal. Replays show Montreal fans inconclusive results, which I'm pretty sure at least some Flyers fans felt was a high stick (good thing they don't riot over these types of things in Philly). Well, too bad - the Habs have suffered from enough bad replay calls (I still can't let that early-season game against the Pens go), so it's nice to catch a break." - Panger76

More from Habs Inside Out, RDS, La Presse, and Le Journal