Habs For Breakfast - And Other News Too

Share All sharing options for: Habs For Breakfast - And Other News Too 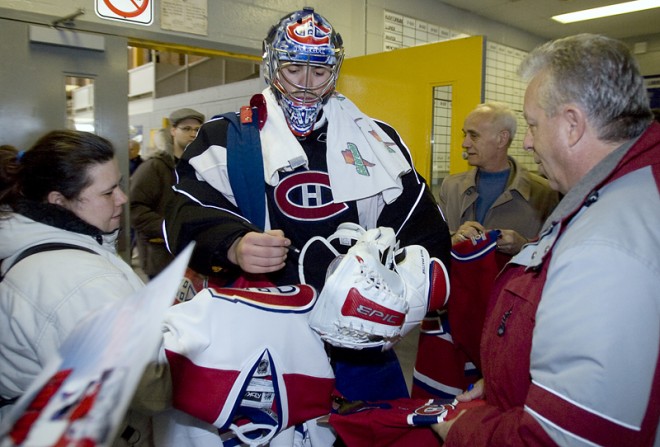 The Habs news is a little thin today, so before getting to the links, I'll share with you 3 little stories concerning hockey and myself over the last 24 hours.

A funny thing happened earlier this morning. I posted my Carey Price Calder piece and I come home to find an e-mail from T.C Deneault (Hockey News, Habs World) giving me a kudos and saying great minds think alike!

Even stranger, another e-mail yesterday from a reader who shares the same name as I.

To the other Robert Lefebvre, have you ever had something like this happen?

On the subject of the double pronged Price posts, if you have read it, go back and check out Anvilcloud's devil's advocate take on the article, in the comments section.

I had a reader who once thanked me for making him think about certain things differently. My readers allow me that same privelege.

Crystal, who I used to refer to as Poke Check back in the day when I went by Reality Check (Yikes!) on this site, is turning into a scoring version of Max Lapierre, if you will.

My goodness, this kid has learned to stir shit lately!

My daughter and her team are off to the Provincials in the Toronto area next week, and as most team's seasons are over, all the Typhoons have left to play for opponants, to remain sharp, are local boys house league squads. The teams are fairly evenly matched.

Crystal is going to the Provincials for the third straight season - a rare accomplishment I think
Perhaps it is the more rugged side of the boys game that is bringing the little terror in her. Her eagerness to poke pucks loose at the goal crease has been earning her the wrath of many defenseman and there's lots of after late whistle shoving going on. Sticks and gloves come up, ankle slashes come down.

Something she calls "fun"!

At 13, she is starting to develop a fearlessness and it manifests itself in funny ways. At school last week, the son of the coach who had cut her from the higher level travel team was taunting her based on missing that cut back in September. Two days later Crystal pounded the piss out of him in the schoolyard. He leaves her be now! 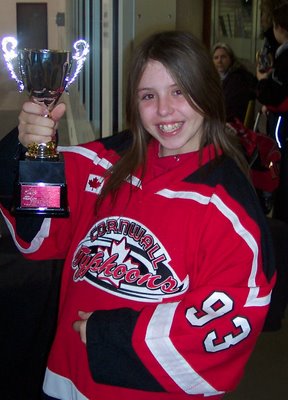 Last night against a boys team from Charlottenburgh county, she registered a girl travel team version of the Gordie Howe hat trick. No, not another fight, but a penalty, a goal and an assist.

The girls won the game and won 5-3, Crystal added a second goal and a eight inch bruise across her thigh from an antagonized player in the corner. The two teams play each other again tonight.

When a team mate's grandfather remarked to me about the Howe feat, he threw me a trivia question about Gordie and he was surprised I had the answer.

There's been a lot spoken about and written of on Howe lately, on the event of his 80th birthday last week. The grandparent, who is old enough to recall Howe's Cups with the Wings asked me if knew how often Howe had fought in his career, and I told him that I had just heard he'd only dropped the gloves 21 times in 23 NHL seasons.

I also knew that the man himself only fought, scored, and assisted in a game once. Now there's a myth!

Crystal has a big thing about making the Provincials. When the time comes for the regional and district playdowns, she brings her game up several notches and grows fiesty. She wants it real bad! The competing teams of the area are very matched in all ways, so the common scores are usually 1-0 or 2-1. In the nine playdown and exhibition games played up until the second week of March, Crystal had 7 goals and 5 assists - her team scored a total of 21 goals in those games.

This year I get the feeling she will not be satisfied with only making it - she wants a gold medal! 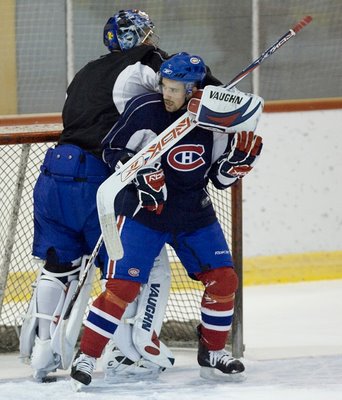 "A month ago, the Canadiens had one glaring weakness. While the power play had been ranked No. 1 for most of the season, the other special team - the penalty-kill - ranked 24th in the National Hockey League. The team's success rate stood at 78.9 per cent, several points below the league average." - Pat Hickey

"I think we have a shot at it," Carbonneau said Wednesday. "I think everyone in the room wants to give it a shot. I'm not going to play two lines and four defencemen the rest of the year. We won in Ottawa (on Tuesday) and not a lot of people thought we could beat them with the injuries we had. We have two games left against teams we're able to beat, so I don't see why we shouldn't try."

The Optimist vs The Pessimist - Four Habs Fans

In celebration of the division title (pessimist's note: stop celebrating we haven't won anything yet!), we thought we'd do something a little different today for the game review. Playing the role of optimist, 1998 Emmy Award Winner Panger. In his usual role of pessimist, HF29. So let's break down the Habs performance.

"Because the game’s on early here on the west coast, at 4:30 pm, I know I need to get my nap in early too. So I’ll head to bed about 11am and sleep until 1:00. This gives me time to have my carbs and several coffees for a quick boost and not feel too bloated by the time the puck drops." - Dennis Kane

Dwelling On The Kerfuffle In Kanata: Blame It On The Opera Singer - Dennis Kane's Excellent Montreal Canadiens Blog

"If I was better man, a nicer man, a good man, I’d feel differently about the mess the Ottawa Senators find themselves in right now. But I’m a terrible man, a bad man, so I’m quite giddy, thank you very much." - Dennis Kane

"The suit targets Crown prosecutor Lise Archambault, Montreal police officer Francoise Fortin and their respective employers, lawyer Jean-Pierre Rancourt said in an interview Tuesday. Rancourt said Lafleur's reputation has been tarnished by the decision by authorities to proceed with the arrest warrant instead of a summons." 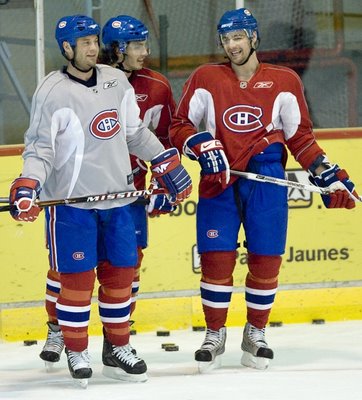