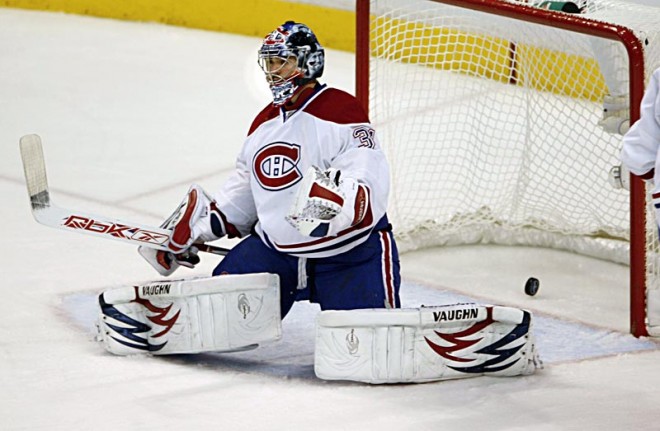 Though it looked bleak for the Canadiens after 40 minutes, the third period proved the game had not yet been lost.

Players have a job to do. Goalies have theirs. They help each other. They feed off each other. Sometimes, when things are not going well, they lose confidence in each.

At one end of the rink is a team unable to score when it needs to most, and at the other extreme is a goalie who is not delivering.

Carey Price, under the weight of the world, has disappointed in his last two games. He can rebound and has done so in the past. He could well do it come Wednesday night.

It's hard to understand what has gone south in Price's game of late. It's a head scratcher!

I was thinking about how the Senators and Ducks, just like the Hurricanes and Lightening before them, seem to suffer from this Stanley Cup hangover thing. It seems like it almost fact anymore, that when teams play a large number of games in the previous spring that they run out of gas earlier in the following season than other players.

Last year at this time, Price was a Hamilton Bulldog, playing his way into June's Calder Cup run. Right after he performed in the WHL playoffs with Tri - City. Right after the World Juniors gold medal run. Right after a work horse season with the Americans.

The kid's played alot of hockey in the last 18 months. He might be pooped! 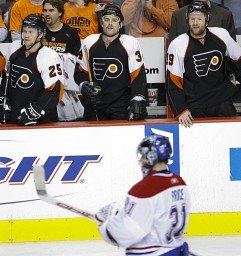 I heard an interesting opinion on CKAC this morning. A caller insisted it was not the Canadiens job to manage Carey Price's career - it is their job to win the Stanley Cup.

He could have said it with more perspective - the caller is both right and wrong in a sense - but taking care of Price properly is what should lead us Cup bound for years.

Many will be looking for Jaroslav Halak to make his playoff debut in the next game, but it won't happen. Last season when Carbonneau was in a do or die scenario in the last game in Toronto he chose Huet over Halak. The coach evidently sticks by the notion of dancing with the one who brought you.

I see Carbonneau starting Price and sticking with him as long as the score remains tight. Perhaps if the Habs can start converting some of their first period chances for a change, both ends of the ice will play with more confidence in each other.

They have to get out of this rut together as a team.

If Price fails and lets in a sticker, the hook will be employed.

I have read many good pieces on Price since he was drafted. There has been none better, or perhaps more timely than the one that appeared in the Monday Gazette authored by Jack Todd. My apologies for missing it yesterday morning in the Habs For Breakfast links.

In the article, titled "Give Price a chance to grow into his greatness", Todd said:

"Let's dispose of one fallacy right here: What Ken Dryden accomplished in 1971 or Patrick Roy in 1986 has nothing whatsoever to do with Carey Price or this playoff season. You can read signs and portents all you want, parse seagull entrails, come up with bizarre number sequences that mean the Habs are supposed to win No. 25 this spring.

It means nothing. Rien. Nada. Zippo. This is 2008 and all that has gone before, from the dawn of creation to Game 7 of the Boston series, means nothing. Every playoff game two teams take the ice and nothing before that moment matters. So far, Price has been good enough to win one series and make a respectable start on the next. You can't ask for more."

The piece went to great lengths to point out what world Price must be living in. It's not quite the same as the one in which we are living in, in regards to him.

Todd made the point quite clear. Price is but 20 years old. A little young to be made into a saviour when most kids his age are just as likely a downtown hooligan flipping a police car for kicks.

Price will get another chance on Wednesday against the Flyers, a team he has beaten four times this season, before two disheartening losses.

After reading the article, the phrase "Give Price A Chance" echoed in my head. I began humming it to the tune of the John Lennon song of a similar title.

It took about 20 minutes for these mimicked lyrics to write themselves:

Everybody's taking 'bout '71 and '93 and '86 and high sticks, goon scraps and jock straps
Brisecraps and time lapses, synapses
All we are saying
Is give Price a chance

Everybody talking 'bout Habs young pups, fisticuffs, and f*ck*ps, Stanley Cups and Stanley Cups
The kid's 20, time for plenty many, shutout. shut up
All we are saying
Is give Price a chance