Canadiens Need Koivu To Finish Off The Bruins

Share All sharing options for: Canadiens Need Koivu To Finish Off The Bruins 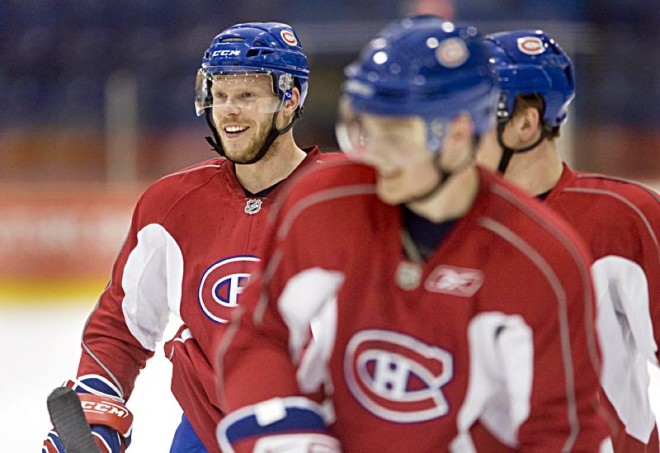 Sometime between games two and three of the Canadiens Bruins series, the question of whether the Habs still needed captain Saku Koivu was brought up. The Canadiens had won their final regular season games without Koivu, and seemed to be doing just fine in the playoffs as his injury kept him on the sidelines.

Now, just how quickly some hockey fans can jump to conclusions in regards to a player is rather amazing. Equally amazing is how fast that opinion can change given a shift of perspectives and situations.

One loss, now two, and the question is no longer whether the Canadiens can live without the usefulness of Koivu, but how much he is missed, and when is he coming back.

To be fair, the question of Koivu's pertinence to the Canadiens hasn't only been brought up with recent events. It has been an ongoing discussion that seemed to gain points as the season has progressed.

It's long been a knock on Koivu that for all he is worth, he has never been, and likely will never be a true top line centerman. That argument has had a certain merit, but in fairness, Koivu had a career season in 2006-07, wherein he tallied 22 goals, 53 assists, and 75 points, all career benchmarks. To put that season in perspective, only 12 other NHL centerman bested those totals. 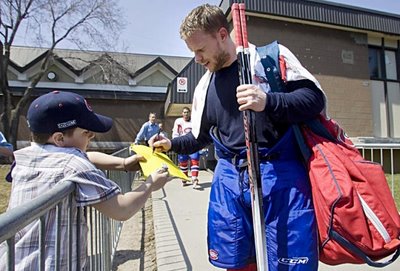 Perhaps Koivu simply cannot meet the high expectations placed upon him in a city where topline centerman on Cup winning teams have regularly recorded between 85 and 100 points. But honestly, does Koivu need to post Beliveau, or Lemaire, or Pete Mahovlich, or Bobby Smith, or Vincent Damphousse type numbers to prove his value?

Saku Koivu might just be a victim of being a slightly different kind of first line centerman in a less productive era.

It could also be said that Koivu's production drop of 19 points this season coincides with Michael Ryder's 16 goal dropoff from a year ago.

What has frustrated Canadiens fans most about Koivu this season, is his increase in penalty minutes. Koivu has taken close to 10 more minor calls in 2007-08 than any other season in his career. Some point to that stat as a sure sign the 33 year old is slowing.

Balancing that argument would be the fact that Koivu has lined up against different opponent's lines this season. With the emergence of a more viable number one line on the Canadiens - the Alex Kovalev / Tomas Plekanec / Andrei Kostitsyn trio - the captain role has been altered some. He no longer lines up against other teams top lines and familiarizing himself with the challenges inherant in that is an ongoing progression.

This season, Koivu's role has been that of a number two pivot. His 56 points aren't unaligned with the expected production of a second line centerman unless people perceive the 2008 Canadiens to be the 1977 Habs. 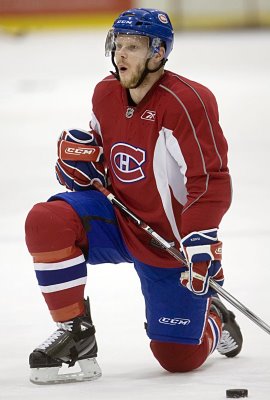 Now numbers are but one facet of what a player like Koivu brings, and intangibles have no statistical column.
As team captain, and an experienced veteran of 12 seasons, Koivu brings many elements to his game that often go unrecognized. He is but one of six players on the Canadiens who played in the 2004 playoffs with the team, and one of thirteen who were in the post season in 2006.

His experience through those rounds is invaluable.
Who on the Canadiens team presently can help the yonger elements in Habs lineup better than Koivu? He has faced Eastern Conference rivals more than anyone else on the team, and his wisdom and trials are priceless in that regard.

In 2006, Koivu was felled by an eye injury in Game 3 against the Hurricanes. At the time, the 7th seeded Habs were in the midst of upsetting a second seeded team that would end up as Stanley Cup champions. The Canadiens had won both the first 2 games of the series, and Koivu's contribution was greatly missed in the next four one goal losses to Carolina.

If you recall, the Habs hopes fell on their chances with Radek Bonk as a the team's top pivot! 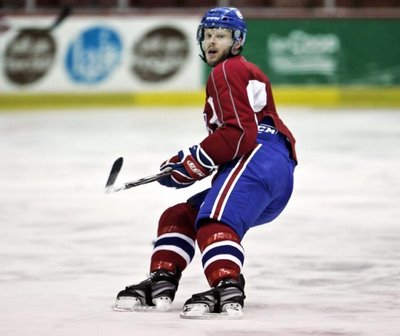 This season, the Canadiens cannot be quite the same qualified underdog as they were two playoff years back. The Habs are favorites to win against the Bruins. Making Boston's work simpler in Koivu's absence, is the fact that the Bruins have been able to focus mainly on the Habs top line, as the trio pivoted by replacement centerman Chris Higgins has so far posed no offensive threat.

The absence of Koivu therefore has made Bruins coach Julien's job much easier. The Canadiens second line has practically been neutered, as Higgins simply seeks to keep his linemates from being victimized by playing a shutdown style of game.

Higgins is concentrating so much on doing the complete work of a centerman, he has rarely found offensive opportunities.

The Canadiens much vaunted power play has suffered as well in Koivu's absence. All the pressure is on the Plekanec trio to succeed because what composes the final 50 seconds of the power play unit amounts to a pop gun attack without the captain.

Should Koivu return, not only would he bring what he has to offer, it would also free Higgins to be the player he was heading down the stretch. Higgins was on fire when the regular season ended, but since Koivu's gone missing he has turned into nothing more than Radek Bonk, to be honest.

For Koivu, it is an ironic assessment of his value that is taking place. Maligned to an extent when he is around to give, missed greatly when he is gone.

Not unlike a steady job, a good life partner, the sun, and water.

Sometimes, you don't know what you've got, until it's gone.