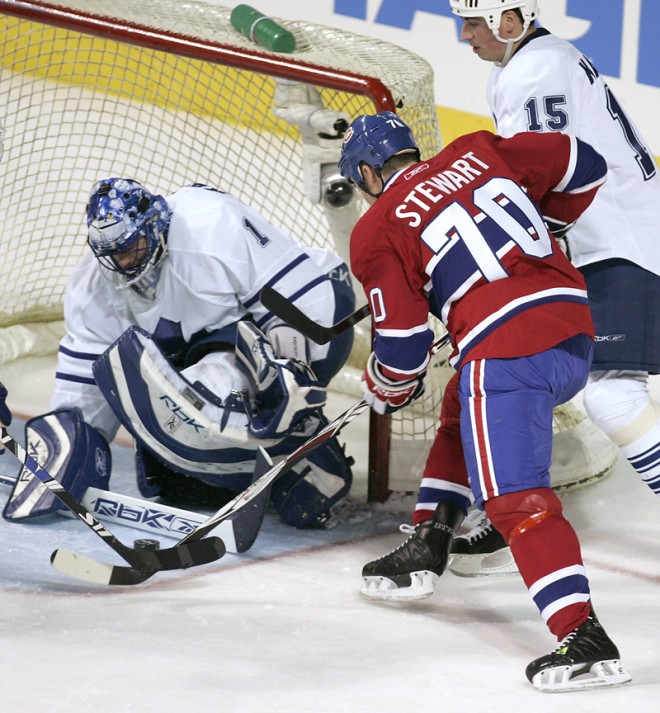 Robert L Note: Greg Stewart sure as heck didn't look like an 8th round pick in his first NHL game on Saturday. For a second I thought he was about to set a record for fastest goal to start a career - who holds that one - Alex Mogilny? I found this feel good piece in today's Hamilton Spectator and could pass up posting it. I hope the Habs keep this kid in Montreal for the rest of the season. His energy is contagious, and few extra kids around to push the vets is never a bad thing. Who knows, maybe he'll get in a game down the road and become the 2008 version of David Maley? They like him so much in Montreal, they have already made a retro bobblehead likeness of him!

The Bell Centre fell in love with Gregory Stewart on Saturday night.

A surprising call-up considering he was in the East Coast League this time last year, Stewart made an outstanding NHL debut, with three scoring chances, including a first-period breakaway, which was foiled by Leaf goalie Andrew Raycroft.

And with 1.9 seconds left, he had a spirited fight with Bryan McCabe in what was probably the defenceman's final act with the Leafs. The crowd, already in a tizzy during the one-minute countdown, went absolutely bonkers for him. 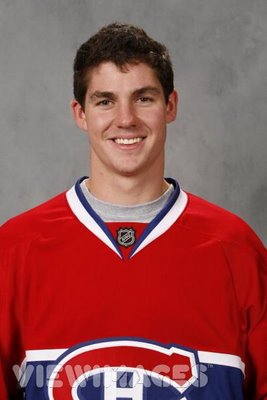 "It was unbelievable," said Stewart, recalled earlier last week. "My body was just tingling when I went on the ice.

To get this chance was a dream come true.

"I didn't know what to expect. I was still nervous in practice all week, and you lose your hands.

"In warm-up some of the older guys told me to stay focused, have fun."

And after his fight with McCabe, the rest of the Canadiens mobbed him in support. Pretty good for a guy who has only 10 goals in his first AHL season and was chosen as an afterthought in the 2004 draft, 246th overall.

"That's the way it's been all through my career. All through junior, I was never expected to do too much and I've been proving everyone wrong. I've been making little baby steps all the way along for the last five years or so. And I think I've improved during the year in Hamilton."

Montreal coach Guy Carbonneau took note of Stewart's adrenalin level during Canadiens' rookie camp and wanted to get him a game or two with the big club because, "as a player I liked to play with a guy with energy like that.

"He was in the E last year, got himself up to the A, and has worked really really hard. He deserved a taste of it.

"His eyes were this big when he got called up and they were even bigger when I told him he was playing Saturday."

Stewart made an impression which will help him next year, but is unlikely to get a call for the playoffs against the Bruins.

Too bad, because as he grew up in Waterloo the Bruins were his favourite team because his cousin Cam Stewart played for them.