Share All sharing options for: Canadiens Call Up Six Bulldogs 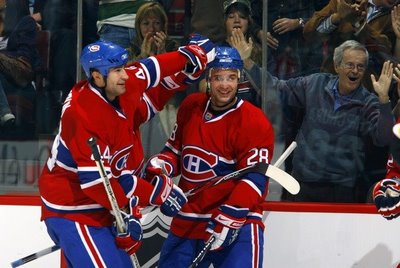 There is no official posting at Montreal Canadiens.com, but Habs Inside Out has learned that forwards Kyle Chipchura, Matt D'Agostini and Brock Trotter, defencemen Mathieu Carle and Pavel Valentenko and goalie Yann Danis have been recalled by the Canadiens from the Hamilton Bulldogs. HIO has posted this Habs press release: 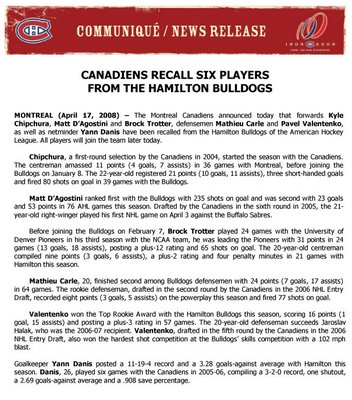 For readers of my morning Breakfast links, here are a half dozen more I found later in the day:

"We Love Montreal, We Really Do" - CBC.ca

"As a former Montrealer, it really bugs me to hear the press in that city say that CBC Sports is anti-Habs. Nothing could be further from the truth. Especially recently." - Scott Moore, Executive Director of CBC Sports

A Friendly Jab Back - Lions In Winter

"I know that many Canadiens fans are sometimes a bit arrogant and find it hard to laugh about themselves, but this is slipping to new lows." - Topham

"We said all along that once his foot was feeling better, that Saku would try to fit it into his skate," said Carbonneau of Koivu, who has been sidelined since blocking a shot from Ales Kotalik of the Sabres on March 28 in Buffalo. "He felt good enough to try it yesterday, so he did. He felt good enough today that he went back out this morning and now we’ll see how he feels tomorrow. His status hasn’t changed, and he’s staying the course."

"Each time the Canadiens have drawn first blood against the Bruins in their Eastern Conference quarterfinal series, they’ve come out on top. This shouldn’t come as any surprise. After all, the Canadiens did lead the East with a 38-5-6 record when they scored first during the regular season."

"You could point to Alex Kovalev's leadership and scoring or Tomas Plekanec's continued development or Mark Streit's production or the skill of the Kostitsyn brothers or the goaltending of carey Price or Mike Komisarek's hard-hitting defense. Those are all good reasons why the Canadiens have been such a sensation this season. Now, add solid, puck-moving defenseman Roman Hamrlik for chemistry, leadership and crisp outlet passes. After all, that's what Montreal GM Bob Gainey did last summer when he knew he was losing Sheldon Souray to free agency." - John McGourty

Sinden Has Seen It Before - Boston.com

"Obviously, Montreal can't be 11 times better than us, but they have been better," said Sinden. "We really do play hard and we're playing with a lot of young players who really aren't quite sure how to play in this league. We're probably not in the elite of the league or anywhere near it, but we've got some good ones."
.