Bring On The Flyers! A Preview And A Look Back

Share All sharing options for: Bring On The Flyers! A Preview And A Look Back 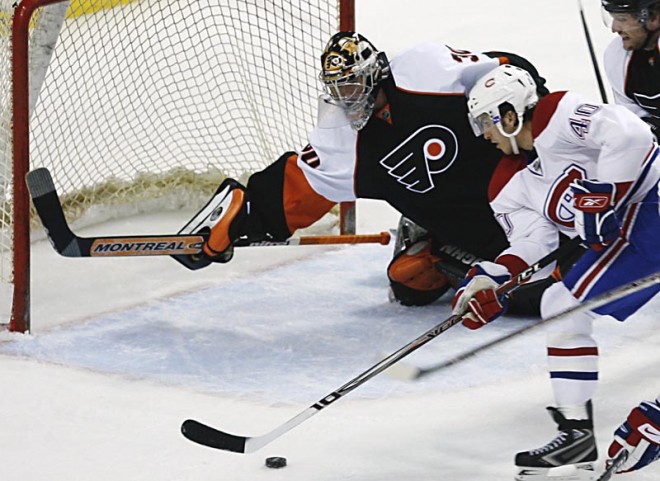 The Canadiens have drawn the sixth seeded Philadelphia Flyers as second round oppona\ents and the series should play out to be an interesting and wild one.

In all likelyhood, this is the opponent the Habs would have prefered to meet as they enjoyed more success this season versus the Flyers than they had against the New York Rangers. The Canadiens went 4 - 0 versus Philadelphia in 2007-08, outscoring them by a 15 - 6 margin.

Of course, the regular season is meaningless at this point, and the Canadiens have just come through learning the downside of overconfidence by perhaps taking a Bruins team they had dominated during the regular season a little too lightly.

This series will mark the fifth time the two team have met in the playoffs since the Flyers joined the NHL in 1967. 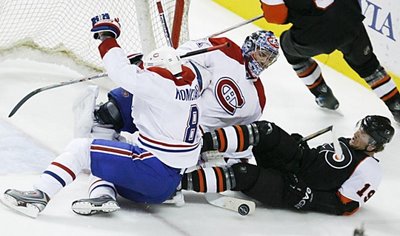 The Canadiens and Flyers first clashed in 1973 when the Bobby Clarke led Flyers were becoming serious Stanley Cup contenders with their combination of brawling hockey tactics and a stifling defensive system. Backed by the strong goaltending of Bernie Parent and the goal scoring exploits of players such as Reggie Leach, Bill Barber and Rick McLeish, the Broad Street Bullies as they became known would go on to win back to back Cups in 1974 and 1975.

The Canadiens of the day were led by veterans Yvan Cournoyer, Frank Mahovlich and Henri Richard, featured the big three of Savard, Lapointe and Robinson on defense, and had Ken Dryden in goal.

In the series, the Habs were a concerned and surely timid group after losing the first game of the series to the Flyers in Montreal. The Canadiens rallied the next night to tie the series and went ahead 2 games to one in Philly on the strenghth of an overtime goal by Robinson. They won the next two and went on to beat the Chicago Blackhawks in the Stanley Cup final.

After the Flyers had imposed their rough and tumble histronics upon the NHL with two Cup wins, the teams met again in the 1976 Cup final. Although the game were close, the series wasn't, as the Canadiens swept in four to regain the Stanley Cup.

Serge Savard, at the time, likened the win as a victory for hockey and the NHL was rescued from a "Slapshot" style mentality that had made inroads into the game. The message was clear - Guy Lafleur and friends were no match for Dave Schultz and company.

Just as the Habs ended the Flyers reign at the top, Philadelphia did the same in knocking of the Cups champions in a six game set in 1987. Claude Lemieux's tactic of returning to the ice after warmup to score a goal into a deserted Flyers net had irked certain Philadelphia players and the charade erupted into a pre game brawl. The teams followed that up two years later in 1989, in a series that is best rememered for rekindling visions of 1973 when Flyers goalie Ron Hextall dashed from his crease to mug Habs defenseman Chris Chelios in retaliation for his hit on Brian Propp. 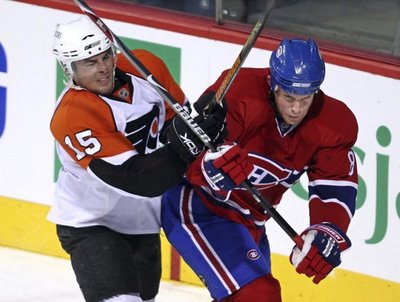 Curiously, the Flyers were coached that season by Paul Holmgren, and the Canadiens lineup featured both Guy Carbonneau and Bob Gainey. Holmgren and Gainey are now opposing GM's, with Carbonneau behind the Habs bench.

It is noteworthy to remark this, as little seems to have changed over the years in terms of how the Flyers operate. Philadelphia are still attempting to reign supreme with goonerism, having seemingly learned little over the three decades of losing since that 1975 Cup. It remains a fact that the never could win with dignity or lose with any amount of class.

This season, several Flyers players have been suspended for various forms of idiotic behavior that has had no effect on the team winning whatsoever. Such acts might affect a timid team at best, but come playoff time it has little chance of success. 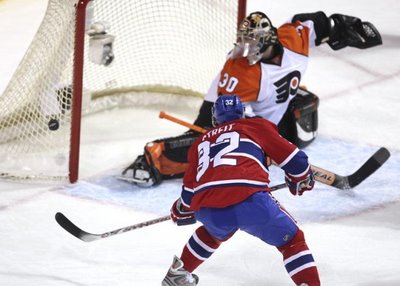 Whether anyone can expect thuggish hockey overtones in this series with the Canadiens is anyone's guess, but if one looks at the Flyers method's versus how the Canadiens operate presently, the scenario of high flying hockey versus beat 'em in the alleys tactics looks ready to play itself out once more.

In the Flyers series clinching win over Washington yesterday, the outcome of the game itself was compromised when a penalty wasn't called as a Flyers forward pushed a Capitals defender into goaltender Cristobal Huet, leading directly to a Philadelphia goal.

It was described this way at NHL.com:

Right before a loose puck made its way to Kapanen, Philadelphia's Patrick Thoreson gave Shaone Morrisonn a shove, and the Washington defenseman plowed into Huet, knocking the goalie off his skates. The NHL posted an explanation on the Web, saying Thoresen legally body checked Morrisonn and no Philadelphia player made contact with Huet.

That reasoning apparently didn't make its way to the fans, who yelled insults and curse words at the on-ice officials.

Now why it is reasoned that Thoreson's body check was legal when Morrisonn never had puck possession is beyond logic, but you can wager the Flyers won't hesitate to try it again. The goal gave the Flyers a 2-1 lead at the time, one they would not relinquish.

Here's a clip of the incident:

Against Montreal, the Flyers were called for 3 goalie interference minors in their four meetings, twice in one game.

The Flyers make no apologies for their ways - when visiting their official site, viewers are greeted with the phrases "Enter / Loading Vengeance NOW!" 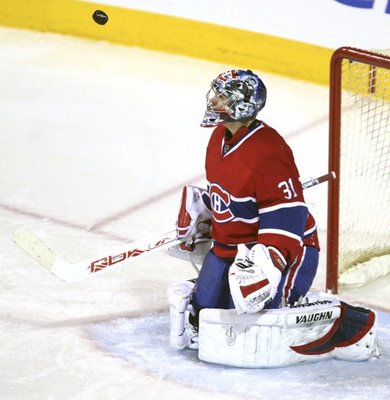 Philadelphia, on the surface, appear to be a team similar to the Habs first round Boston foes in terms of their rugged play, grinding forwards and less than fleet footed defence.

While they may have allowed more goals against than the Bruins, they were the fifth highest scoring team in the East with six 20 plus goal scorers. The Canadiens will surely be challenged as the Flyers are a very tough opponent when gaining the lead.

Here is how this season game's played out:

The best Flyers against the Canadiens offensively were Mike Richards with 2 goals and an assist, Daniel Briere with 2 assists, and Mike Knuble with a goal and an assist. Knuble is out for the playoffs with an injury.

In the first game on November 1, the goalies were Huet and Biron and Montreal outshot the Flyers 41-19. In the remaining three game, it was Price versus Nittymaki, and the Canadiens were outshot in all three by 31-23, 34-20, and 37-33 margins.

Carey Price had two first against the Flyers, earning his first career shutout on February 16, and his first NHL assist the following night.

The Flyers had the league's second most potent powerplay behind the Canadiens, but managed only one goal in 28 man advantage situations. The Canadiens for their part countered with 6 goals in 31 chances.

The Montreal media will have a field day with the Daniel Briere stories, as will the Bell Centre boo birds giving the Flyers forward the business everytime he touches the puck.

It should be quite the entertaining series!

Here's a few clips featuring the Habs and Flyers starting with a Robinson and Schultz tilt from a regular season game in 1974, Andrei Kostitsyn's highlight reel goal against Philly this season, brother Sergei's nice hit on Steve Downie in the OHL, and an extended version of the last 80's pre game brawl.