Are the Habs destined to write a Stanley Cup storyline?

Share All sharing options for: Are the Habs destined to write a Stanley Cup storyline? 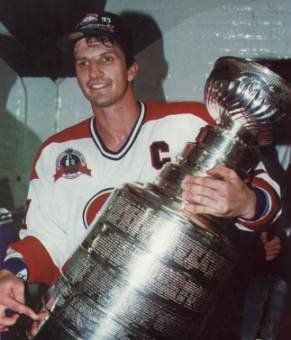 If you have followed the Montreal Canadiens for as long as I have, and you recall how storylines seem to begin writing themselves as the Habs inched closer to each Stanley Cup win, you surely must be getting the same sense I have that something special is in the works this spring.

The first Stanley Cup playoffs I watched in whole from the beginning to end was in 1970-71, when a Canadiens team most assumed were Cup write-offs stunned the hockey world by upsetting a powerhouse Bruins team in the seven game opening round.

Rookie goalie Ken Dryden became the story, as he had played in just six NHL games prior to the start of the playoffs. He gave the Bruins (and two rounds later, the Blackhawks) fits the likes of which only turn up in goal-scorers' nightmares. He'd go on to win the Conn Smythe Trophy, and follow it up by winning the Calder Trophy the next season; the totally unheard of stuff of legends.

Dryden was but one piece of the puzzle on that 1970-71 team. He had games where he would allow four or five goals and the Habs still won,  so somebody else had to be doing something right as well.

The players who became storylines that spring included a cast of wily veterans on a team that was considered in transition. Jean Beliveau, in his final playoffs, was leadership personified. Key goals on ice, wise judgment and counselling off it. Frank Mahovlich, probably the best trade deadline pickup ever, tallied 27 point in 20 playoff games, including 14 goals. Jacques Lemaire and Yvan Cournoyer were both players coming into their own. John Ferguson had come out of retirement to rejoin the team for the final sprint. 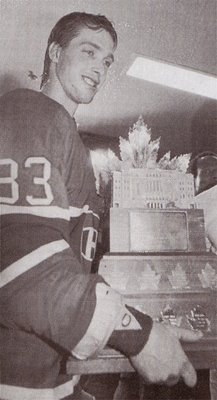 And then there was Henri Richard.

The Pocket Rocket played like a man on a mission, in a rage, on the way to his 10th Stanley Cup. Richard was aging, and had made the transition from offensive center into defensive specialist quite smoothly, but he still yearned for a larger role as one of the elders of the team. He fought constantly with coach Al MacNeil, who had taken the team over 25 games into the season, for ice-time and respect.

Everything came to a head between Richard and McNeil in Game Six in the Stanley Cup Final against Chicago. Unhappy about having been sat on the bench for large chunks of time, Henri lashed out through the media at the coach, calling him the worst he has ever had.

With the Canadiens down by a 2-1 score late in Game Seven of the Final, Richard tied the game shorthanded and scored the game winner in the the third period. McNeil likely saw the fire in Richard's eyes, and made the most of it.

The 1970-71 win was a surprise Stanley Cup, not unlike those remembered by the Habs younger fans of today, who make references to 1985-86 or 1992-93 when recalling their first Cup memories.

From the time I was 14 until I was 18, the Canadiens took all four Stanley Cups. That run spoiled a lot of fans as surely as it spoiled me at the time. It must have been very similar to how fans of the Canadiens felt in the 1950s, when the Habs were winning five in a row. 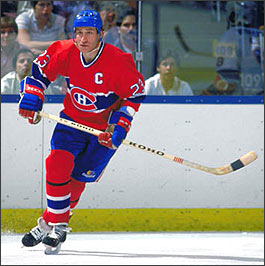 Constant winning raised expectations and the delivering of those annual Stanley Cups likely raised fans arrogance levels to the point where followers of other teams began claiming that Habs fans acted as though winning the Cup was an inherent divine right of the Montreal Canadiens.

We, as fans, called it confidence. Other folks called it a whole bunch of other bad names.

But when I look back upon those years, I realize that whenever fans knew a Cup was coming, they weren't often wrong. Often it was figured out in October even.

It was either "Habs are taking it this year" or "Habs don't stand a chance this year". It has always been microscopically studied much like it still is today.

Between the "can do" and "no can do" seasons, lies the type of years where perceptions change as the team progresses.

2007-08 fits that kind of season. Back in October, fans might have felt that the Canadiens were a playoff bound team that could be capable of scratching and clawing its way up to eighth place.

But the Stanley Cup?

Forget about it. Even captain Saku Koivu seemed to agree.

One regular season Eastern Conference title later, all those earlier assessments are out the window.

So now, many Habs fans' hopes cling to the underlying storylines that are presently happening, and making parallels between other unexpected Cup wins such as 1971, 1986, and 1993.

Include me in there too. 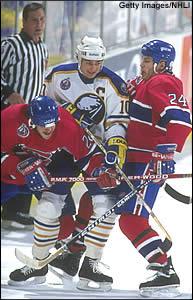 Beyond the obvious Carey Price equals Roy equals Dryden spin that has Habs fandom wound up, there are other storylines being written with each passing win.

Price's composure and focus through shutouts after losses are one, then there are the Alex Kovalev heroics when he seemingly is supposed to not be playing all that well. Koivu returning from a broken foot to lead and inspire. The emergence of unsung heroes such as Patrice Brisebois and Tom Kostopoulos who are offering unexpected contributions.

There's Steve Bégin, hitting like he is an incarnation of Bob Gainey. The play of brothers Andrei and Sergei Kostitsyn, united often on the same line, who are developing a habit of each scoring one shift apart from each other.

There hasn't been a storyline involving an illegal stick so far, but the shattering of Philadelphia Flyers' Jeff Carter's graphite composite stick late in Game One enabled the late game heroics of Kovalev and Kostopoulos.

Watchful eyes are out for who is going to be playing the roles of this year's Brian Skrudland, Claude Lemieux, Eric Desjardins, or Paul Dipietro.

The 1985-86 and 1992-93 Stanley Cup victories are my reference points for such expectations and hopes for this year's team. I think that in my Habs heart and mind it is almost inevitable, to be truthful.

In those seasons, I felt the Canadiens had pretty good teams, though I did not believe or expect they would go all the way initially.

For 2007-08, I believe that Montreal will last three rounds and perhaps extinguish against the victors of the Penguins and Rangers series. I truly believe that the Habs have what it takes to beat either team, but a whole slew of things have to go right first for it to happen.

What propels those beliefs for me are those underlying storylines that I speak of. The more I see of them, the more I mentally refer to past playoff trends. It involves heroes emerging, the forging of a team identity, and other intangibles. 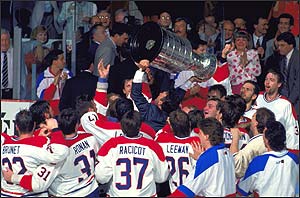 It mounts with each passing win and finding new ways to win. It takes those storyline threads and trends to start happening to fully convince me that this is the Habs year to go for it.

In 1985-86, Claude Lemieux looked like the second coming of the Rocket while scoring 10 playoff goals as a rookie. When Patrick Roy slammed the door shut on the New York Rangers in a third-round overtime game, I sensed that there was more to come.

In 1992-93, after the Canadiens came back from a 2-0 deficit in games to the Quebec Nordiques in round one, I felt something special was underway. The team's — and Roy's — overtime run spoke loudly that a special thing was indeed about to happen. You could almost feel the vibe, it was so present.

In both those years there was a moment that told me, even though I started the playoffs feeling unconvinced, that the Habs had a Cup in the bag! As longshots, or as underdogs, sometimes it takes an external turning point that opens the door wide open and says "this Cup is ours for the taking."

In 1985-86, it was Steve Smith bouncing a puck into his own net off goalie Grant Fuhr, interrupting an Oilers dynasty, and clearing a path for the Canadiens 23rd Cup.

With each of those goals, I concretely knew the Canadiens were about to be Stanley Cup champions.

I can't say for sure, but maybe my intuition came from microscopically studying the dominoes of destiny.

I don't know why, but I just knew it. Everyone else that followed the team in those years surely felt the same special sensations.

I recall two other such times where I felt destiny was almost at hand, and where a special team was forming to become larger than the sum of its parts. The 1983-84 Canadiens, led by goalie Steve Penney, had the defending Cup champion Islanders in a 2-0 bind before it all came apart. In 20055-06, the Habs had Carolina drowned and shackled when an eye injury to Koivu became their Houdini.

Each time, I felt the Habs were but one win away from being within sniffing distance of the Stanley Cup Finals.

I didn't see it quite the same way in 1988-89, when it was accepted all season long that Montreal and Calgary were the NHL's best two teams, and that barring disasters the two would meet in the Finals. Montreal were leading 2-1 in games when Roy, Chris Chelios, Guy Carbonneau and Bobby Smith were outplayed by Mike Vernon, Al MacInnis, Joel Otto and Doug Gilmour. The Flames won the final three games.

That season, the Canadiens boasted close to a dozen players with over 40 points, but their calling card was a stifling defensive trap employed by coach Pat Burns. Roy lost only five games that season; only once at the Forum. Stephane Richer was having an off year, sandwiched between two 50-goal seasons. Lemieux's antics were more of a story than his play was.

Once the Habs reached the playoffs, heroes did not seem to be rising out of nowhere like before. The team became perfunctory at best. It won with calculated and unspectacular regularity.

Perhaps because there was no underdog storylines to follow that spring, or that Calgary and Montreal were perfectly matched, there seemed to be little sparkle to this otherwise excellent team.

That year, it was the Flames who owned all the magical storylines. The mustachioed Lanny McDonald was about to retire, the cannon blasts of MacInnis were scaring goalies to death, the acquisition of Doug Gilmour gave the Flames more grit and depth, and finally the trade of Wayne Gretzky to the Los Angeles Kings enabled Calgary to rise from the shadows and become Alberta's best team.

For Montreal that spring, it simply wasn't meant to be.

In this 2008 spring, I can feel some rumblings. I have a kind of premonition. I see certain things about this team coming into shape, and I see those telltale storylines forming. I get the sense that we will all know if this Habs team is Cup worthy, if once it gets past the Flyers and into the third round, it is within six wins of the Cup before either their Pittsburgh or New York Ranger opponents are.

It takes about that long to really tell when a team is for real.

Sometimes it is like watching destiny unfold, and you get the sense that you've seen this movie before.

When Mike Richards of the Flyers was nabbed for kneeing Kovalev late in Game One, I sensed a convincing calm, as though I knew for sure lightning was about to strike.

Maybe tonight, some Habs player will pull a Jacques Lemaire and nail an 80-footer through the legs of a distracted Biron.

For now, the Canadiens are a young team that is learning how to win together in the playoffs by beating teams that they ought to be beating.

The real deal is next round.