All Hail The Coming Of Carey!

Share All sharing options for: All Hail The Coming Of Carey! 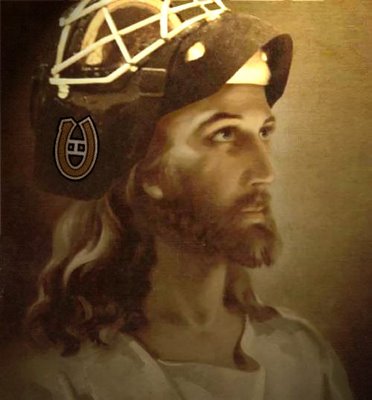 I caught this little tongue in cheek video clip courtesy of the Deadspin site. I thought it was kind of humourous and fun, but nothing to be taken too seriously. The picture above gives away the content. When that photo originally appeared on this site earlier in the year, I caught a little flak for it....something about mocking the father and son.

So here's my little disclaimer on it: I'm a Catholic, not by choice, believe in God and Jesus with certain principles that are none of your business. If Jesus thought there was anything wrong with this photo, he would not have posed for it, or signed a contract with the Montreal Canadiens.


The subject of the Deadspin post was a look at the winners and losers heading in to round one. They had this to say on the Habs:

Winner No. 2: Montreal Canadiens. Lost amid all the wackiness in the Wales Conference near the end was the fact that Montreal went on a rather torrid 8-1-1 streak (despite missing Saku Koivu) to capture the top seed and earn a first-round bye...errrr, a date with the Bruins. Some teams choose to lease ass, depending on how it fits their lifestyle; Montreal, on the other hand, chose to own Boston's ass this season, probably for the tax advantages. Bruins GM Peter Chiarelli said "We have to face up to slay the dragon"; never a good sign when management starts using Matthew McConaughey dialogue from "Reign of Fire" as pre-series motivation. The Beer They'd Be: An ice cold Stella Artois that some Canadiens rookie stole from a woman in a Tampa Bay bar because he claimed it was his actually girlfriend's beer. (Insert jerk-off hand motion)