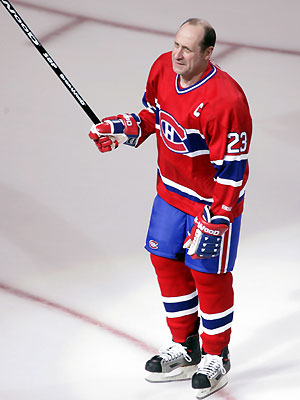 In the Habs TV section of the Montreal Canadien's official site you can find amnu curios among the clips featured. Along with the weekly highlights and interviews, there are also the complete retirement ceremonies impecably filmed as we viewed them on the tube.

The Bob Gainey jersey retirement was a very sedate but emotional evening for the Canadiens GM. Here it is in it's entirety, preceeded by a link to a great piece from the Gazette's Red Fisher. Below the clip, is a link to my tribute to Gainey entitled "All About Bob" that ran on February 23.

I will be featuring similar looks back in the coming days for other such ceremonies the Habs have held in the last few years.

One-time Canadiens physician Douglas Kinnear tells this story about Bob Gainey, whose No. 23 will be raised to the Bell Centre rafters tonight.

The Canadiens were facing the Quebec Nordiques in the 1983-84 playoffs, and during one of the games, Gainey tripped to the ice. A Nordiques player fell on him.

"He took this hit and immediately came off the ice holding his shoulder," Dr. Kinnear recalled. "He came into our dressing room. I took one look and it was obvious he had a dislocation. Now there's a difference between a dislocation and a separation. With a separation, it's just rest and the player gets better. With a dislocation, you put your foot in the armpit and you pull like hell. With luck, it goes back in. Continue.

All About Bob - 23 links to Gainey articles