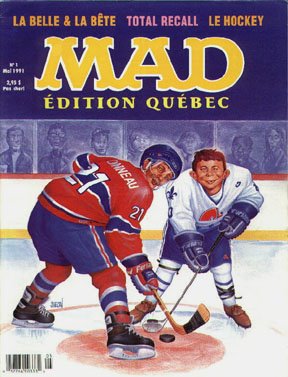 Robert L Note: I guess this is turning into Guy Carbonneau week at the site. After my criticism on certain decisions he made for the game last Tuesday against St. Louis and a look into his fan tribute site a few days later, I posted a translation of a piece authored by Bertrand Raymond that told of the many differences between the Carbonneau who coached last season as a rookie, and the more experienced bench boss of this season. Here now is another extension of the Raymond piece that also appeared in Saturday's Le Journal.

When the Canadiens win, its coach enjoys a break from the onslought of public opinion.

Guy Carbonneau is enjoying a wave of popularity like few coaches before him have profited from. He is well liked by fans and writers, who have not forgotten his contribution to the team as a player, a prerequisit that works in his favour.

None of this means that his moves aren't closely examined by just about everyone. Fans comment on his every decision, numerous sports talk radio shows and television programs, who need fresh angles on new subjects daily, spark things up over the least little detail.

"Since the start of the year, I've been critiqued for every single decision I have taken", Carbonneau says smilling. "Why Price instead of Huet? Why is Latendresse on the third line? Why is a certain player in the press box and not another? When I give players a day off I get criticized. I make a line change, I'm criticized."

"I understand that fans and the media have opinions. Sometimes when I'm listening to radio, I'm impressed by what I hear coming from the mouths of the public. The fans really know their stuff. Often, they have really good ideas. I come into the office thinking that "maybe I should try that." 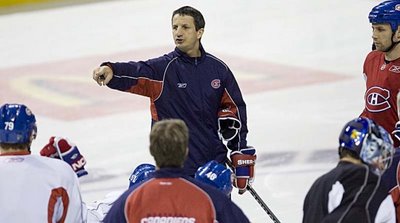 Carbonneau mentions that there is no shortage of coaches in the media throwing their two cents in.

He speaks notably of Jacques Demers, Burns, Bergeron, Dubé, of Benoit Brunet and a host of former NHL'ers now employed in the ranks of the media. With Lebeau, Ciccone, Desjardins, Bureau, Morrisette, Stock, Therrien and others, there are more tha a dozen "experts" who have an opinion to add in regards to his decisions.

"The same ideas can be given seven or eight different slants", he cautions. "I respect people's opinions but I make my decisions based on concrete knowledge that I have at my disposal. I know my players. I know what doesn't work for some of them. From within, I have a much broader idea of the situations that go on that any outsider working on television."

Having stated that, and without seeming too affected by the criticism, he isn't any different that any other coach. There are days when he'd just like to get away from it all.

"I grew up here, so I am used to it", he offers."Nevertheless, I feel priveledged to work within a solid organization for an extraordinary boss who knows the job description and demands as well as he knows me."