Time For Carbonneau To Get Playoff Serious

Share All sharing options for: Time For Carbonneau To Get Playoff Serious 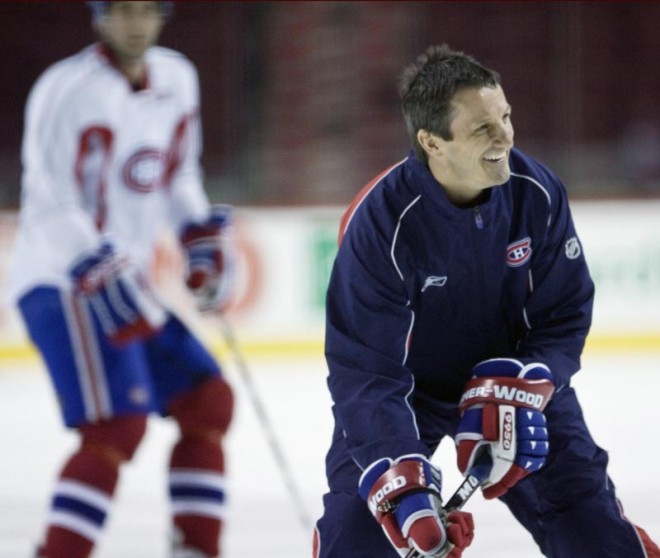 There wasn't much to like about losing to the Blues on Tuesday. The loss was followed by all kinds of talk that the Canadiens took the game too lightly.

The Habs were damn lame against the blue notes, and by the time they realized there was a competitor playing for pride on the ice, they couldn't gain enough edge to get back in it.

Since I took the youngest to see "Horton", I'll use a Seussism for an analogy for what went afoul.

The Habs were lame,
The coach was the same,
And that's the name where I aim the blame

Yes, Guy Carbonneau, in hindsight, is at fault for this one. He too, took it lightly.

I almost blew out an eyebrow frowning over a quote on radio CKAC this morning when Carbonneau was asked in hindsight if perhaps the Habs were in fact guilty of taking the Blues lightly. He skated a Latendresse pivot around the question before polishing this turd something along these lines:

"St. Louis is an opponant that we don't know very well. We don't play against them often enough to be familiar with them. Maybe the players knew the Blues weren't doing well. Things like that happen sometimes."

"WHAAAAAAAAAT CRAAAAAAAAP", was my reaction as I drove over a schoolbus. 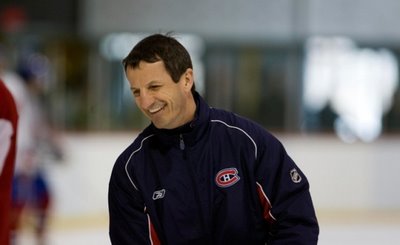 Now I like Carbonneau. I like him a lot. But that comment cost him my vote for coach of the year. I'll put him down third behind Bruce Boudreau and Lindy Ruff on my imaginary ballot.

None of his answer washes with me because you don't reply with a "maybe" while absolving your team.

And you don't absolve your team after such a loss, even with that handy and lame excuse at the ready.

If I had been a reporter in the room after hearing that, I would have earned a menacing stare with my next question.

"But Guy, it is your job to prepare your team, is it not?", I would have asked, ducking the flying bottle of Cristill Light.

How on God's ice can he admit to lame pre - scouting of the Blues? Who are the Habs pro scouts and what is their assignment again? Do they not look at teams tapes of recent games as well as when teams were faring better to get a complete picture of the opponant they are about to face?

If in the coach and coaches preparation of the game, those in charge glanced at and skipped over minute details of their opponants good and bad habits and tendencies, then I am really scared for the playoffs.

Taking any opponant lightly at this time of year is unforgivable. It sends a frightful message that turns gamers into passengers real quick.

In coaching, you never make excuses for your players, because trust me, they will use them. Players are like that. Not all of them of course, but give some a window to crawl from the fire and they're out there. Whether it is in the form of bad pre - game prep or weak post game assessment, some players will jump all over that opportunity to absolve themselves that is platter handed to them from ther coach.

It's all very much inexcusable! 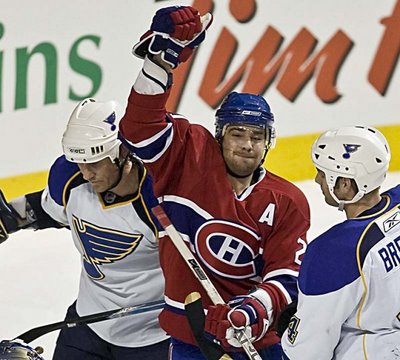 Even worse, Carbonneau's biggest sin was in the lineup he dressed for the game, which was a sure sign of an upcoming night off.

I didn't have much problem with Carbonneau giving a bonus start to Jaroslav Halak after a solid Islanders game, but combined with the other moves he made, it created a detrimental domino effect across the lineup.

If Carey Price is going to be the go - to - goalie from this point on, then he must be used in not only must win games, but the apparent easy looking ones, if for no better reason that to back up the notion that this is a serious game on the line - as they all should be this time of year.

I'd have said to Halak, "Nice game kid, you've earned another start - in the first game after we clinch a playoff spot, maybe. Keep working hard."

Now the biggest problem I have was in inserting Bryan Smolinski and Patrice Brisebois in the lineup in lieu of Maxim Lapierre, Steve Begin and Ryan O`Byrne. I understand the virtues of keeping certain elements fresh at this time, but dressing both, combined with Halak starting against a down and out team was playing with fire while drinking gasoline.

Smolinski and Brisebois have both had numerous opportunities to play of late, to validate their existances, and give the Habs some smoking games.

I could rant off on the faults of the two endlessly here, but I'll suffice to say that the pair rarely bring it. It's just not good enough to be "good enough", these two have to be excellent to re - enter the lineup. In the end, they're just too damn soft of players to throw out unless there are injuries. Black aces they ought to be.

When players see who is in the lineup, it sends signals.

"Coach ain't worried", goes around a room in a hurry - virus like! 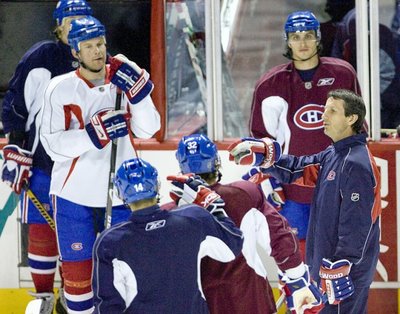 There has been a drop in intensity about the team since the western road trip and it coincides with the reintegration of these two players into the lineup. They aren't getting the message to "bring it or you're out" because it is not being delivered by the coach.

It's been delivered to Tom Kostopoulos, and he gets it in spades.

The Canadiens need the contributions of Lapierre and O' Byrne. They need their crunch and attitude and youthful exhuberance. The league knows the book on Brisebois and Smolinski and how to play against them. They could pull out a five year old scouting report and not go wrong. The kids are wild cards. Not as well known, and able to light fires or piss them out in a hurry.

Begin brings intensity and confidence. I'd like to see a stat of the Habs record when he dresses. I'd be willing to bet it is impressive.

Hopefully Carbonneau is finished with his expiriments. It's time to send a signal to the team that it's serious time now and that the margin for error is zero.

On Tuesday, there were maybe four or five players at best who played as though something of value was on the line. Other than Kostopoulos, I found that Mikhail Grabovski and Sergei Kostitsyn had their usual edge and that Chris Higgins was very much focused on what his coach has dictated as his defined role a matter of days before. Alex Kovalev was desperately trying to do too much again, like last season, in light of his line's funk - not a reassuring sign.

The rest of the players caught on a little too late.

Tonight, the Bruins might as well be playing for the Stanley Cup - they want to beat Montreal so badly!

It's up to Carbonneau to dress a serious playoff time team tonight to show the players it is serious business time.

After all, they've scouted the Bruins!