This Season Carbonneau Has A Stronger Grasp

Share All sharing options for: This Season Carbonneau Has A Stronger Grasp 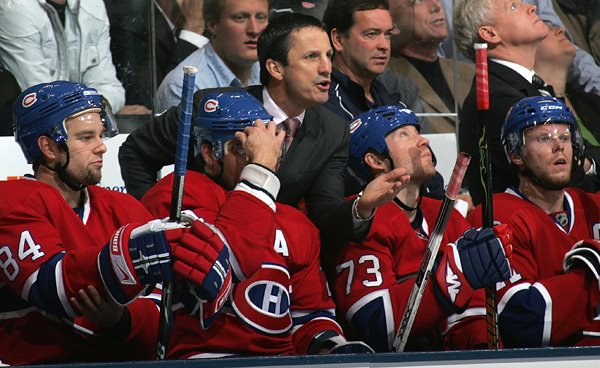 Translated from Bertrand Raymond's column in the March 22, 2008 Le Journal

One year ago, Guy Carboneau's lack of experience behind the bench was plainly visible.

Even though he'd been an assistant to the general manager in Dallas, and an assistant coach in Montreal on two occasions, the final decisions now belonged to him. On certain nights, everything seemed to happen so fast for a coach whose main assistant, Kirk Muller, was as green a rookie as he.

Less than a year later, with his team enjoying a remarkable season, Carbonneau is considered a coach of the year candidate.

So, how did that happen?

Of course, several players - Alex Kovalev comes to mind - have had their say in the success, but Carbonneau isn't denying that one year's experience can make a big difference. He understands that today he is a better coach.

During an interesting interview, the former Canadiens captain admits that he has a better control over the day to day goings on regarding the team. Honestly, he admits that he is surprised by the Habs performance this season.

"Realistically, I never thought come mid March that we'd be ahead of the Ottawa Senators", Carbonneau claims. "Of course, it is obvious that the Senators have taken a step back, and it has opened doors for many teams."

He could also add that the Canadiens have avoided what has happened with Ottawa. If the Habs have not suffered anything longer than a three game losing streak, a good part of the credit must head Carbonneau's way.

"Should it be concluded that we have been very fortunate?", he asks. "I guess you could say that our team has been well prepared for games and that we have been lucky enough to avoid injuries. These are all factors that need to be taken into consideration."

To thread the needle more precisely, Carbonneau adds that certain decisions that were planned out well ahead of time have played a major role in the success of the Canadiens. 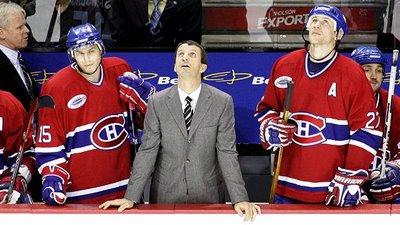 For example, the team has regularly profited from a scheduled day off per week. Practices that would run up to 75 minutes earlier in the year now cut off at about 40 minutes. Carbonneau has never swayed from using four lines and six defenseman all season. Lower tier players are on a regular rotation in and out of the lineup.

Obviously, the rotation of players doesn't include the impact variety. The point was to keep third and fourth lines, as well as sixth and seventh defenseman energized.

Carbonneau also notes that the team doesn't play a kamikazee style of hockey, which enables injuries to be avoided. Stressing a poised positional game has its benefits.

The coach has taken some criticism for giving days off after bad games, especially the Sundays, but has stubbornly stuck to his gins in doing so regardless.

"When I was playing, I found it beneficial to have that day off", he explains. "When Sunday is free, players can plan family activities, take off to the Laurentides, or do whatever. After losses, I'd head to the dressing room just furious, but I always found it was important to respect that routine."

That could be the prime explanation for Carbonneau's success in year two. Last season, things were passing fast and he was more emotional. This season, there is the sense that he is more in control.

Carbonneau explains that the major difference between this season and last, is that he can foresee the reactions that his decisions provoke.

"There is less of the unknown for me this time", he admits. "Last season, I was trying to learn from what others coaches had done. I'd note things afterwards. I was making decisions without knowing what to expect. This year, I know what to expect." 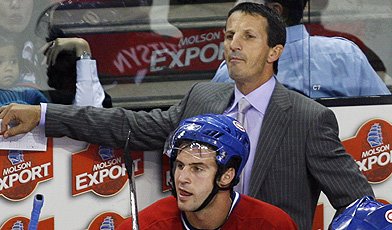 Without having to mention it, the 48 year old coach brings up last year's situation with defenseman Craig Rivet. He classifies that learning experience as something that contributes to what has made him a better equiped coach today should the situation arise again.

"I still believe I did the right thing", he says, "but this year, would I have acted differently?
Probably. I would have taken time to explain to him why I was doing it. Rivet was surprised to find himself out of the lineup. Every player is when it happens to them."

"We didn't do this on a whim. It was the right decision, but it was an unexpected reaction to it. All told, we should have been more in control of the situation."

Carbonneau admits that behind the bench he is reacting to circumstances better than before. For example, last season, when down by two goals, he'd shorten the bench in favor of those who were rolling, as opposed to continuing to roll four lines as he does now.

When asked what have been this seasons biggest surprises for him, Carbonneau glances at a wall chart that contains the Habs current lineup.

"After all that went down last season, Alex Kovalev has to top the list. Roman Hamrlik's contribution is of note. Throw in the names of Bouillon, Gorges, and Streit, in addition to all the young players."

In Carbonneau's esteem, how many players would the Canadiens be away from a Stanley Cup?
It's a hard question for him to answer. The coach believes that with the current roster at his disposal, that the Canadiens have it in them to cause some heads to turn.

"I think that if we would have been able to add Marian Hossa, it would have helped a great deal", he adds in all honesty. "We are a young team. We'll see how the players do come playoff time. We are on the verge of getting some very important answers.".