Pacioretty For The Big Time

Share All sharing options for: Pacioretty For The Big Time 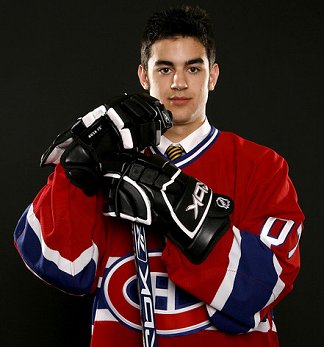 From Bob Sweeney at the Advocate

When all is said and done with the hockey career of New Canaan's Max Pacioretty, the moment he is living now will always resonate with positive memories.Within the last nine months Pacioretty, 19, was drafted in the first round by the Montreal Candiens, he is having a strong freshman season as a left wing on the University of Michigan's first line, he played for the United States at the World Junior Hockey Championships, and now the Wolverines have legitimate aspirations for the Frozen Four and a national championship. They are the nation's top-ranked team.

The Wolverines began their quest for the Frozen Four this weekend by hosting Nebraska-Omaha in a best-of-3 quarterfinal series in the Central Collegiate Hockey Association. Michigan (28-5-4) won Friday night's opener, the second game was last night and an if-necessary game is scheduled for tonight.

This season's success has been a bit of a pleasant surprise because Pacioretty is one of 11 freshmen and there are five sophomores on Michigan's 25-man roster."I couldn't be happier," Pacioretty said. "Being No. 1 in the country is something that no one thought could happen. Being one of 11 freshman and contributing to the success of the team is a real good feeling." 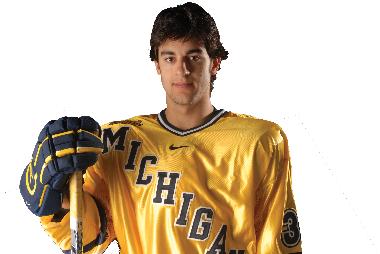 Pacioretty is fourth on the team in scoring with 34 points although he missed five games - three games because of a fractured hand and two more while being away with the U.S. Juniors from Dec. 26-Jan. 4. He is third on the team in goals (14) and assists (20) and second in power-play goals (eight).

The 6-foot-2, 203-pounder led all CCHA freshmen with 28 points (12 goals) in 25 league games, was named to the CCHA All-Rookie Team on Monday, and he is a finalist for the CCHA Rookie of the Year award.

"Max is having a solid freshman season," legendary UM coach Red Berenson said. "What he's added to our team is physical-ness and size and he's chipped in offensively. He's played a nice role offensively on our top line with two of our best players. He's getting a great opportunity and for the most part he's taking advantage of it."

"I had a really slow start," Pacioretty said. "I didn't have a point in the first four games. Then I ended up breaking my hand and playing in a cast for the next eight games. It was really tough to come back and have confidence. Somehow I found a way to contribute. From then on it's just been getting better and better and better.

"The most important thing for me is improvement and most of that is due to confidence," Pacioretty continued. "Early in the season I wouldn't shoot the puck sometimes because I did not have much confidence. Now I'm shooting the puck instead of making the extra pass because I'm scared to take the shot. I'm taking the shots when I need to now. It's just better decision-making." 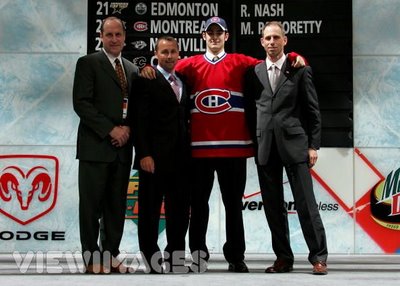 Berenson put Pacioretty on the first line with superb senior center Kevin Porter and fellow freshman winger Aaron Palushaj. All this trio has done is combine to rack up 66 goals and 69 assists. Porter, touted as the favorite for the Hobey Baker Award, has a 28-28-56 line.

"Max has been a good fit from Day 1," Berenson said. "I thought he'd be a good fit if he could make plays and fit in with two of our best players, and that it would help him as well. He's added something to the line. Max might've been our last freshman to score, now he's leading the freshmen. He's been playing well all year and he's playing very well now.

"He's a good power forward," Berenson added. "He's a good skater who plays physical and because he has good vision and good hands he passes the puck well. He's getting more confident around the net. Some would say he's a grinder who can score."

Berenson was a two-time All-American at Michigan (1961 and '62), he had 43 goals and 23 assists in 1962 and on the night after his final game for Michigan in 1962 he played for the Montreal Canadiens to become the first collegiate player to step immediately into the NHL.

Berenson drank from the Stanley Cup with the 1965 Canadiens and had 658 points (261 goals) during his 17 years in the NHL (also with the New York Rangers, the Detroit Red Wings and the St. Louis Blues). Now in his 24th year coaching at his alma mater, he'll try to reach his ninth Frozen Four and win his third national championship. Berenson took a 639-297-68 career record into last night's game.

The NHL is sort of the reverse of the NBA in that promising players in their upper-teenage years get drafted and go off to college before going to the NHL organization. When they and their respective NHL organization feel the time is right, the player is assigned a roster spot with a professional team within the organization. Many first-rounders eventually never pan out and never hit the ice in an NHL game.

Berenson does not have any extra special connection to the Montreal organization and the Canadiens had nothing to do with Pacioretty's college decision.

"I made it all on my own," Pacioretty said. "(The Canadiens) like the program, they know they have great coaching at Michigan and they develop players well. They're real happy with this school and the way I'm developing."

Pacioretty is also thrilled about experiencing college hockey fever at its best.

"It is unbelievable here," Pacioretty raved. "I've seen a couple college games growing up, but nothing like this. Every night at home games the place is packed and it's so wild. It's so fun to play in this atmosphere.