The Other Side Of Patrick Roy

Share All sharing options for: The Other Side Of Patrick Roy 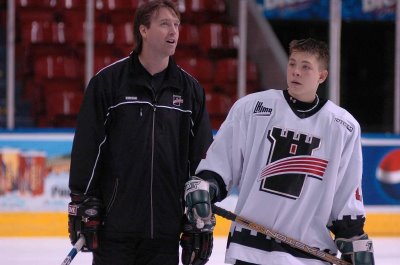 "There's two sides to every story", my father used to tell me, wisely, when I was younger. It is advice that you grow up and understand fairly quickly. People are compicated, and life is hard.

"Don't judge a book by it's cover" is another old adage that had stood time's test, for good reason.

Yesterday, I posted a piece, a long examination, that dealt with why I felt that the time was not quite yet right to consider Patrick Roy's jersey ready for the skyline of the Bell Centre.

Two things that I feel stand in the goalie's way, are the circumstances that dealt with his rash and radical exit from the Canadiens organization in Montreal, and a public image damaged by several actions that are best termed "ill advised".

The first, Roy cannot undo, and the second can be erased with time, words and actions.

When I suggest "not quite yet", I mean specifically in the realm of the Canadiens 100th anniversary. I don't want to see Roy's #33 raised in controversy, which it wery well would be, due to happenings such as the one Roy was involved in last weekend. I do, in time expect Roy's #33 to hit the roof alongside of Plante's and Dryden's, at a time when the consent for such an honour has closer to a majority approval. As it stands, doing this next season would anger as many as it would thrill....and that ain't right.

Now in the context of judging book's covers and the flipside of the coin, I read Red Fisher's piece on Roy today and was a little horrified at first. Red aired a litany of dirty Roy laundry to explain why he felt the one - time Saint Patrick had "abdicated" the honour and then some.

The truth is, I felt uncomfortable reading it, to an extent. I understand people's dislike of Roy's persona, but who really wishes to see a hero to many torn down even more in the aftermath of last weekend?

I'm reading on, and thinking, "He doesn't need this!"

I've long been familiar with Mr Fisher's work, I have read his excellent autobiography ( I have actually been scanning it over in the past few days, before all this hit the fan ) and always appreciated his motto of fairness when it came to writting about players.

In my eyes, Red Fisher always was at his best when detailing the human side of the players in which he wrote about. He had long earned players trust and respect by duly given them the same, and from it poured forth beautiful accountings of the people and heroes we cherished.

Despite Fisher's stance on where Roy's jersey should hang, he finished off his column with an anecdote from Roy's playing days that was quite heartwarming. It opened up the other side of Patrick Roy for all to see. It epitomized fairness, in a sense.

"Controversy has been a recurring theme with Roy during his career, and yet I also have seen him in his best moments when his gentleness moved people to tears. Roy surely has forgotten it, but I still remember one incident that left me giddy with pleasure.

It happened following a Habs practice in Quebec City. There was a game to be played that night, but now only Roy remained on the ice waiting for a 10 year old to join him. The boy was born to pain, and lived with it bravely - he had this dream of going one on one with his idol, Roy. What could be greater than to score a goal on Patrick Roy?

So there they were at the Quebec Coliseum: Roy skating in little circles, sending up small shivers of ice pellets, rattling the blade of his stick on the ice before settling into a crouch in his crease, looking every inch like a guy in the moments before Game 7 of the Stanley Cup final. The boy's mother looked on nervously watching her child who hadn't smiled or laughed nearly often enough in his young life.

It took a long time for the boy, skating on his matchstick legs, to close the 15 feet separating him from Roy's crease. A wobbly shot ... a desperate lunge from Roy and ... goal! Roy slammed his stick on the ice in mock anger.

"Try that again," he muttered at the boy, who by now had a reason to smile. "I'll bet you can't do that again."

Another wobbly shot. Another goal. Ten minutes of goal after goal followed - and after each one the boy would raise his stick skyward, his face lighting up with smiles that eventually grew into a delighted laugh. His mother looked on from her Coliseum seat - and cried.

"That was a nice thing you did this morning," I told Roy later that day. "It must have been hard." 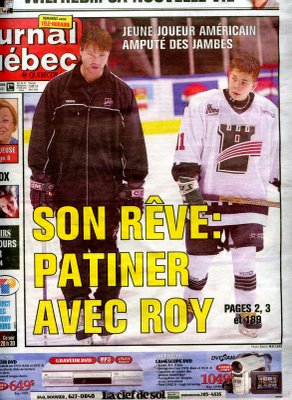 See, that is why Red Fisher is an honoured journalist respected by his peers.

After reading this piece, I quickly went back to a story I had found the day before involving Roy and a boyhood dream - I was hoping they weren't one and the same. I had bookmarked it and anxiously returned to find another tale of Roy, a young child, and a seemingly recurring theme.

I suppose, in all the brouhaha, lost is Patrick Roy's connection to Ronald McDonald House, and his dedication to helping out kids, especially the underpriveledged.

This is story was about a 14 year old boy named Josh Pobursky, an incredible young man who had both his legs amputated at the knees when he was 13 months old.

Josh has incredible drive and determination and has not let what others deem a handicap prevent him from enjoying life to the fullest. Josh loves hockey, among many his many interests, and he has inspired many along the way.

Four years ago, the producer of a childrens show called "Hang On To The Dream" heard about Josh throught sources and had to meet him. Christopher Ewing, the producer of the show about extraordinary kids contacted Josh's family and school about having him on their show, all without Josh knowing.

They set up a type of ambush, where Josh would be called to the principle's office. The boy headed there with some trepidation, wondering what he'd done and if he had somehow gotten in trouble.

When Josh arrived in the office, he found his friends, family, a film crew, and Ewing who informed him that he was going to get to meet his idol, none other than Patrick Roy.

The Pobursky's were sent from their home in Michigan to Quebec City to meet with Roy, owner of the Quebec Remparts. Producers of the show evidently set up with Roy, a day Josh will never forget.

Roy did everything but roll out the red carpet for him. This would be a simple meet and greet where the boy would receive a signed Roy jersey and a handshake. 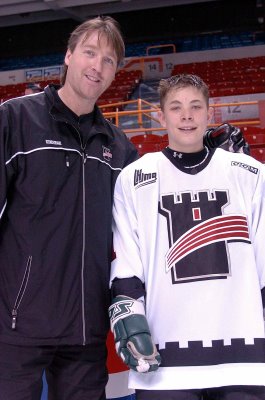 A nervous Josh was met by Roy at the Pepsi Colisée and given a tour of the arena. He was then brought into the Remparts dressing room where he was surprised to find a stall identified with "Pobursky 11" noted above it, a jersey with the same hanging from it, and hockey equipement spread out within it.

Josh would be practicing as a member of the Remparts for the day!

Talk about your thrill of thrills - getting to practice with a major junior hockey team.

Nevermind young Josh being all glazed eyes over meeting his idol, he gets to practice with the team - a Rempart for a day.

The Remparts players couldn't even tell that Josh had prosthetic legs.

A final surprise arranged by Roy awaiting Josh - taking the game's ceremonial faceoff and being introduced to the crowd.

You can read more about Josh Pobursky's adventure and life here, here and here.

Now what Roy did became news because a television show enabled it to happen. Similar things likely happen more often than becomes newsworthy in Roy's life. As he said to Fisher years earlier, "it's easy" for him to make such things happen, as it surely is for people of fame and financial ability. Often they do not seek, nor want publicity for their acts.

God only knows how often Patrick Roy has done such things. Not many may know that Roy and his father Michel also assist in varying ways with youth hockey tournaments all over the region, providing the coverage of insurance for players and likely underwritting expenses for the associations.

Again, the book may have an unsightly cover, but pages inside reveal that there is more to the whole story.
.