Share All sharing options for: Kostitsyn's 20th Places Habs At The Eastern Peak 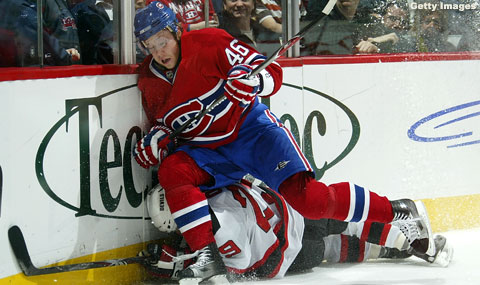 I'm kind of speechless at the moment, and I don't quite know where to begin with this post, where to go, or even what to say.

A word of warning to my good readers - this post will be a journey!

It wasn't a pretty win over the feisty Devils tonight, but it was beautiful for all the right reasons.

I have not felt this happy about this team in years. It feels like things are in order again in my hockey world.

When Andrei Kostitsyn scored his wrap around goal late in the third, I swear I felt the eruption all the way from Montreal.

Bob Gainey has assembled quite a team in just a few short years. They are young. They can score. They don't back down. They find ways to beat gritty teams like the Devils.

I hope Gainey and all the players are jubilant at the moment. I hope they can sit back overnight and tomorrow and understand the significance of this achievement. I hope that they can focus on the fact that it can be temporary, and that letdowns can and will occur. A young team can get overconfident much easier than a veteran team.

I hope that what has happened to the Ottawa Senators doesn't happen to Montreal, that these players don't start thumping their chests unless the player next to them is hoisting a 33 pound mug. 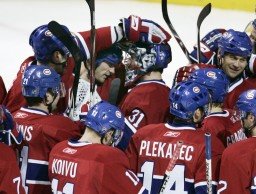 Yesterday, against Buffalo, they seized the moment and battled their way into first in the Northeast.

It was but one step.

Tonight, facing their fiercest of slyest foes, they never quit while squeezing out a narrow margin victory.

The peak of the Eastern Conference is now theirs, for the moment.

It was another step.

Staring them down is a tough 4 game western swing that often unfocuses teams.

The Habs will be playing the Sharks, Coyotes, Kings and Ducks in a seven day swing. The Senators will be playing the same four teams in the same span finishing one day earlier. During that time, the Devils will host the Maple Leafs twice with a trip to Tampa in between, before heading back to Montreal for their final tilt of the season with the Habs.

I see the Canadiens needing 5 or 6 of a possible 8 points to keep pace.

Tonight's game, as I mentioned earlier, wasn't the most disciplined and dominating effort. The were facing an opponant quite capable of being boringly irritable in their robot like command of a game. 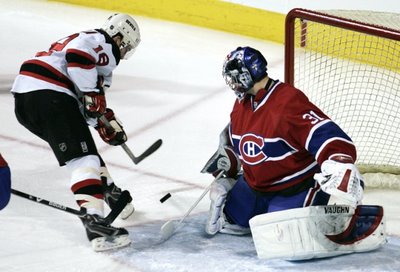 It was a battle of firewagon offense versus anti - hockey, and the good guys got the last break.

I often found that Canadiens teams of old felt so helpless against the Devils, that they simply packed their baggage and quit, letting Jersey do their thing while trying not to be embarrassed.

Not this bunch of Habs.

These guys, though they were never behind in the game, never hung their heads, and never felt defeated beforehand through the stretches when they were outplayed.

Since losing a season high three consecutive game early in February, the Canadiens have now won 7 of 9 since then. During their current thrust, the Habs have outscored their opponants by a 31 to 21 margin.

Tonight they seemed a confident group in front of Carey Price, recently annointed and thrust into the role of Habs saviour - rookie pimples and all. Price is making the notion of himself being the go - to goalie, a mere 25 games into his career, into a deliriously twisted thrill ride. So far, the kid is making it work, and making Bob Gainey look genial while letting in all of four goals in 3 games, one of which found net off the back of his head.

When you string off the names of all the first and second year players, not only the rookies and sophomores on the squad, but encompassing all the players Bob Gainey has brought in, you start to get a real sense of the achievement and turnaround that has taken place for this current edition of the Habs.

Of the 28 players who have dressed for the Habs this season, 14 are newcomers from the last 2 seasons. That's an astounding testament to Bob Gainey and his staff's work.

Gainey's methods and motions often make us question his choices and decision at times. There will always be a faction of dissidents who would rather focus on his slips than his strikes.

But more and more I sense a rallying of opinion in Gainey's case. Now when curves are thrown at us by Gainey, last Tuesday being a prime example, folks just plainly reside themselves with a "he knows what he's doing" deferment.

As fans, we tend to be led whether we admit to it or not, by the layers of media coverage into questioning the past, present, and especially the future of the team. When I think about that last statement, I realize that no team's hockey fans have more experience with past glories and future hopes than do fans of the Habs. We've had history in droves, and no one understands the hopes in building a winning team better than Canadiens fans.

It's often the present that we tend to have the most difficulty with, because it stands as a compromise between what's occured before, and what is promised.

No team, and hence no teams fans, learn better from past failures and errors than do the Canadiens and their fans. It comes with the abundance of reminders, both positive and negative through Habs history, of how things can go right and how things can go wrong.

If there is a lesson to be learned, it would be to trust the GM you have faith in, as long as the team continuously improves towards it's goal.

Robert L Note: My pardons, this disjointed post / cheer / howl of the Habs reaching top spot, has delved into an entirely different article. Blame the combination of a Saturday night win, first place euphoria, and some sweet flowing brews for the too smooth transition into this companion piece about the work of Habs GM's.

If you are interested in how Bob Gainey became a Montreal Canadien 35 years ago, this link is for you.