Habs For Breakfast - Brooms Out Edition

Share All sharing options for: Habs For Breakfast - Brooms Out Edition 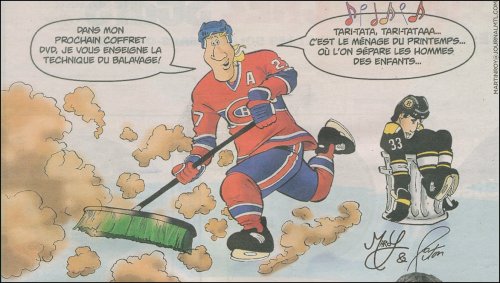 We own them. We humiliate them. They pay for it.

I'm beginning to believe they enjoy it.

Tonight, we teased them until they couldn't handle any more......

Pardon my sexual analogies. It was an opening too easy to resist. I'll try an alternate slant.

Boston. Beantown. The city of farts....

Jack and the Beanstalk....this beanstalk has jack....

Claude Julien's head looks like a bean on a 45 degree angle with a neck....

Sorry, ridicule just doesn't seem to do the facts justice.

The Habs are 8 and 0 against the Bruins this season with Saturday's OT win.

Eleven in a row, but who's counting, right! Streaks this long are usually only seen on a dragstrip, or in Ken Hitchcock's boxers.

The Canadiens are now one win away from clinching a playoff spot. One loss by Buffalo and Washington does the trick as well. "Everybody has their favourite moves and I've done mine a few times and I decided it was time to come up with something else and it worked," said Koivu.

"The Canadiens - the youngest roster currently holding down a playoff spot - know that overcoming obstacles is part of the maturing process. But with a five-point lead over the Senators in the Northeast Division and expectations on the team rising each day, they know they have yet to solve a seasoned Ottawa squad that is 5-1 against them this season."

"In the end, it was just another night at the office for Begin. After sitting out the last 11 games with a groin injury, the Canadiens’ Energizer bunny was up to his old tricks, dishing out a game-high eight hits. "I was dying to play again and I skated more than enough over the past week. My groin passed the test," confirmed Begin. "I got the chance to throw a few hits and that gave me all the energy I needed." - Manny Almela

A numerical look at the Canadiens-Bruins battle on Saturday night at the Bell Centre.

"Since March 2007, the Canadiens have feasted on the Bruins, winning 10 straight encounters. On the brink of the last regular season meeting with their Northeast Division rivals, the Habs will have the chance to make history. With a win over the Bruins on Saturday night, the Canadiens will have managed their seventh-longest winning streak against one team." - Manny Almela

"The number eight in an interesting figure: All spiders, and more generally all arachnids, have eight legs. An octopus has eight tentacles. Eight is the atomic number of oxygen. The Jewish religious rite of brit milah is held on a baby boy's eighth day of life. In chess, each side has eight pawns and the board is made of 64 squares arranged in an eight by eight lattice. The original Nintendo used 8-bit graphics. In tarot, card No. 8 is "Strength". It's also my very own numerological number. In hockey, it`s the number of the NHL`s top goal scorer and perhaps MVP, Alex the Gr8. It`s exactly half the number of wins required to win the Cup. It is also now the number of wins the Montreal Canadiens have earned against the Boston Bruins in the 2007-2008 NHL regular season." - Panger 76 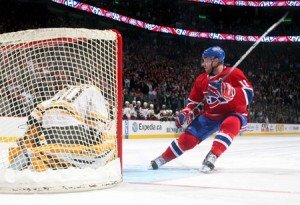 "Saku's line, and the captain in particular, was an incredible force tonight. He, along with Ryder and Sergei Kostitsyn dominated most of their shifts as they kept Boston in their own zone for many extended periods. Koivu had a flurry of chances that seemed to last the whole game. His puck-control was the best that I have seen from him all season as he is now definitely into playoff mode. On top of having an excellent 65 minutes he added the shootout winner to cap off an exceptional night." - Tobalev 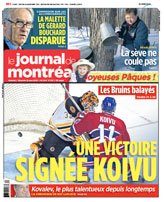 Here are the game highlights from Habs TV.