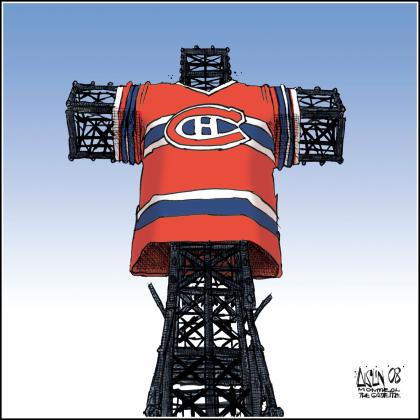 If there is a different look to that Senators smirk today, it might just be from the spanking the Habs administered to them last night.

The Canadiens have clinched a playoff spot, but that is anticlimactic to what is still at stake.

The Habs are first overall in the Eastern Conference, and at the present time, no team can surpass them by winning their games in hand.

Seven points up on Ottawa. Three ahead of Pittsburgh. Five ahead of New Jersey.

Montreal, with the big win tonight, has grasped the ability to control its own destiny and finish first overall in the Conference. An unimaginable scenario at the start of the season.

Best of all, is that if the Habs were to win only two of their remaining five games, it would then force the Senators to win five of their final six games in order to take first place back from the Canadiens.

I don't see that happening.

Now some might think to look at last night's 7-5 win as being a close game, but I see it otherwise.

The game was on the line for 40 minutes, and after those two frames were done the Canadiens were up 7-1. This young Canadiens team may have been guilty of knowing what each and every one of us fans knew at that point - that this game was essentially in the books with 20 minutes to go.

As the third period was about to begin I had an uncomfortable feeling. It was not a premonition of a Senators comeback or anything of the like, it was discomfort from knowing the Habs were in unfamiliar territory. Seeing as they had absolutely dominated Ottawa for two periods, I wondered how the Canadiens would approach the third.

Would they continue on the assault and go for more goals and pad some stats?

Would they tighten up the neutral zone and just shut the Senators down quietly?

What would Carbonneau's instruction be, and would each player follow it?

Well, what resulted was quite messy, but inconsequencial in the end.

This young team played like a team that had never been in this position against this opponant before. They backed off some and did more gliding than striding and learned real fast that they were in fact still playing the Ottawa Senators and not the 1974 Washington Capitals.

They left their goalie to himself and took penalties that attentive effort usually eliminates - a dangerous move considering that the officials on this night were as out of it as the Senators were earlier. Upon opening the door for an against all odds Ottawa comeback, the Habs were caught spinning, and it would have been costly and extremely detrimental to its self esteem had they not built up a six goal lead over two periods.

Lessons such as this are precious as pearls when they do not cost a team two points.

But the third period of this game is only a sideline to the story. I'm certain that Ottawa takes no solace in it's missed comeback attempt, and Montreal should focus on what it did over most of the game rather than on how it ended. 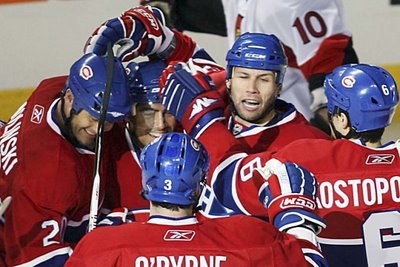 What occured over 40 minutes was that the Canadiens decided to enforce their game, speed and grit, on the Senators.

There was much talk before the contest of the Habs having too much respect for their opponant and I like when I hear such comments coming from the lips of players and coaches.

The "too much respect" notion equals fear in my eyes and ears. It is what a team has to collectively get over, first, before understanding that not only can they match the Senators in overall assets, they also have the ability, skill, and work ethic to defeat them.

When that mindset is put into action and subscribed to by all participants, results like last night's game occur.

The Habs need not have an inferiority complex when it comes to the Senators.

Not before, and not anymore.

Of course Ottawa can, and will continue to be, explosive at times with the likes of Alfredsson, Heatley and Spezza, but the Canadiens counter well with an envious amount of offensive depth spread out across the whole lineup.

Testament to that fact are the 14 players on the Habs who found the scoresheet in this win.
As we have watched these young Canadiens build into a contender over the last few seasons, the most inspiring part of the ride has been to take note of the progression of the team as it learns to overcome obstacles.

Once the talent and skill are in place, the remaining pieces of the foundation become an unfaltering work ethic combined with a confidence that is unshakable. 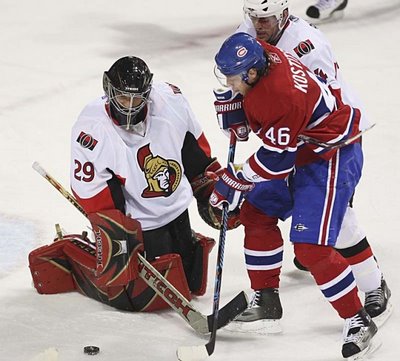 There have been four wins this season that measure the Canadiens growth:

The first early season win against Daniel Briere and the Flyers, a 5-2 win on November 1, when Philly were perched atop of the standings. Briere had said that he chose to sign in Philly because he felt they were a better team. Not only was he way off on that quote, but the Canadiens learned they didn't need him either.

The next was a third period comeback 4-3 win against the Devils in New Jersey on January 24. The Habs vanquished a decade's worth of private hell that game. I'd guess that when it was over, they sat in the dressing room for a spell, looked around at each other, and started seeing themselves differently.

Then there was the infamous comeback of all time game against the Rangers on February 19, when they erased a five goal defecit to win 6-5 in a shootout. Only 16 days earlier, the Rangers had undone the Habs in stitchlike fashion coming back from three goals to win 5-3. The erosion of confidence was restored with this win and the Habs learned what they were capable of when focused.

The fourth measure of the Habs growth occured last night, when they put all their faith in playing their game against an opponant that they previously feared. Seeing that such confidence, again combined with the proper focus and work ethic, has paid dividends, they should not look back.

Not even to that messy and unfocussed third period.

"Let Ottawa worry about us for a change, instead of us worrying about them", is likely how they approached this game, and it worked.

That makes four demons exorcised in one season - inspiring stuff!

This group began the season as a most dubious pretender in many eyes. Though they surely did not believe what so called hockey experts were saying about them, but it had to be cause for reflection and self evaluation.

Stung pride has its virtues.

All season long they have had to answer questions regarding being the surprise team in the NHL this season. Hearing the question repeatedly in their faces while glancing at the standings must cause the occasional moment of disbelief amongst themselves.

Along the way, players have admitted to being surprised themselves at how well things have gone. Most reassuring of all, is that there is no one single thing that they can point to that represents the turnaround.

There are as many reason for their showing as there are players on the team, and that has to reinforce a united confidence greatly.

Pretty soon they will stop acting as though they are surprised.