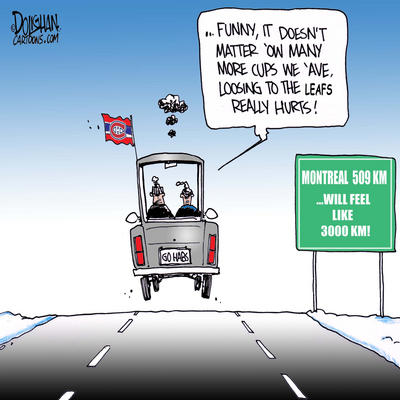 Two quotes caught my eye after last nights loss to Toronto, and they are disturbing ones.

First, Chris Higgins says, "We were looking for an easy game, but it wasn't easy".

Then Guy Carbonneau offers this gem:

"I knew we would have a bit of a letdown after clinching a playoff spot, but I didn't think it would last this long. We have three games left. We have to regroup and end the regular season on a good note."

As I mentioned a week or so ago, after the game against the Blues, that when you dress the B lineup, you send the "easy game coming" message.

Of course, it wasn't in the cards for Saku Koivu and Mark Streit to go down with injuries after the Buffalo game, but it was already known before by everyone that Saturday would see Dandeneault, Brisebois, and Halak getting starts.

That's where the trouble began with this loss. The Habs should have perceived the Maple Leafs as the wiry opponant they always are. Attach all the low brow insults you wish to the blue and white's, they are a proud team that gets peacock heady against the Habs in even the most seemingly inconsequencial tilts.

Carbonneau, despite his intention of getting seldom used players some game action, inadvertantly set up the "easy game" mentality that cost the team a pivotal win by making it known beforehand that the trio mentioned above would play on Saturday.

Now even as the elimainated Leafs appeared by some to be a soft opponant for game #79, the stakes were high. First place in the Northeast looks like it is bagged by the Habs, but until it is, you don't mess with your chances.

Pardon me, but I see an Eastern Conference title within the Habs grasp.

After it was known that Koivu and Streit were unavailable, the coach could have undone the message by changing his mind and starting Carey Price instead. The about face would have sent the right message.

A win last night would have made Monday's game against the Senators near meaningless, but now it is of ultimate importance.

Ottawa hardly looks capable lately of stringing off four straight wins to finish the season, though it is not impossible given their strengths. Montreal looks as though they are counting on Ottawa to fail and hand them what would turn out to be the second rank in the Eastern Conference.

After the performance against Toronto, and with mounting injuries and bobos, the Habs look like a team that might well drop their last three heading into the post season.

There is a sense of mission accomplished surrounding the Habs since they clinched a playoff spot. The words they speak in individual quotes make it seems that they are far from satisfied, but their play tells a whole other story. 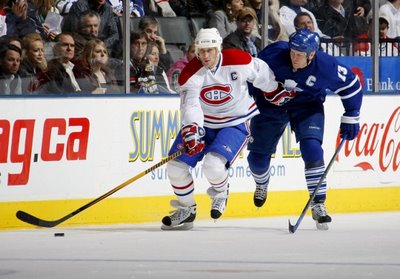 I've read tons of articles on Guy Carbonneau and his coaching methods of late, and there is a recurring theme that sends a sirens shrill up my spine. Carbo learned a great deal as a player, and much of that astute perspective has translated itself into making him a good coach. Lessons learned by Carbonneau last season taught him alot about how players react to different situations, and this season he has benefitted from trusting the coaching instinct more than the former player instinct inherant in him.

One must understand that Carbonneau won both of his Stanley Cups as a Montreal Canadien on teams that were not ranked in the top of the standings and were generally regarded as underdogs.

This was the case in 1986 and 1993, when the Canadiens had the seventh and sixth best overall record in the NHL, respectively.

When the Habs lost the 1989 final to Calgary in six games, they finished with 115 points to the Flames 117. One win along the road cost them home ice against the Flames, and perhaps the Stanley Cup in retrospect. 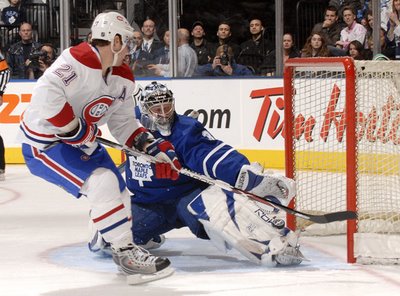 Tonight's loss to the Leafs took away the Canadiens ability to control its own destiny. The Pittsburgh Penguins recouped a game in hand that could enable them to leapfrog the Habs in the conference standings. This was essentially what was at stake against Toronto - home ice advantage all the way to the Cup final. If the right teams fall in order, it could even mean home ice in the Stanley Cup final.

Last night, it looked as though the Canadiens took their Maple Leafs opponants with a grain of salt. Too bad that they didn't perceive the Penguins as eventual opponants, because that is what it might now come down to.

By the third round of the playoffs, having the last line change against the likes of Crosby and Malkin could make all the difference in the world.

That is what might have been lost last night by a coach who inadvertantly let his players know a walk in the park lay ahead against the Leafs.

What it all comes down to is killer instinct and how to instill it into a group of players. It's all good to prepare a team with a game plan in mind that counters what an opponant is expected to deliver, but sometimes horses need to be changed in midstream. Coaching is done on the fly, and not beforehand. Game situations change fast and preparations for all scenarios must be covered in advance.

Tonight the Canadiens came prepared to face a team with little to gain.

Yes, lots of weird things happened as they usually do in games at the ACC, but the Habs lost this one at the drop of the puck because their mindset was tuned to a Sunday afternoon stroll.

Come Monday, the Canadiens are playing the Ottawa Senators for the Stanley Cup.

It shouldn't be approached as anything less.
.