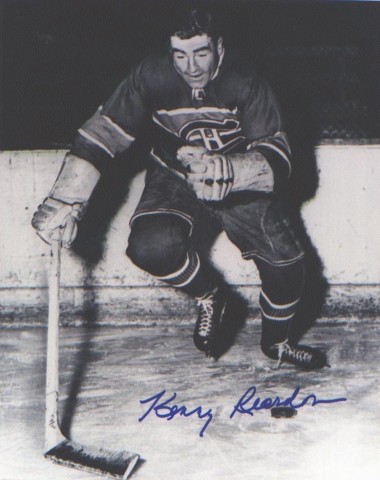 The Montreal Canadiens family has lost another warrior.

Ken Reardon, Hockey Hall of Fame defenseman, passed away today at the age of 86. Reardon, one of the toughest defenseman of his time had been suffering from Alzheimer's disease.

Reardon, an All-Star in his time, played seven seasons with the Canadiens between 1940 and 1950, his NHL years interrupted by WWII service. After winning a pair of Stanley Cup with the Canadiens, Reardon had left the game a victim of mounting injuries before the age of 30.

He endeared himself to teammates with a rugged style of play. It is a little known fact, but Reardon was actually the last player to tend goal for a goaltender knocked out of a game in the era when teams carried only one netminder. He replaced Bill Durnan in a game against the New York Rangers on October 14, 1949.

In T.C. Deneault's comprehensive bio on Reardon, he once assessed himself in this manner:

"I couldn't skate, I couldn't shoot, and I wasn't very intelligent. But I was spectacular"

(Deneault's bio is a must read on Reardon. Check it out here.) 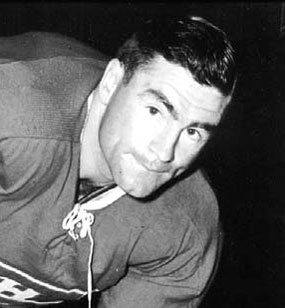 After his retirement, Reardon served the Canadiens as a scout before being named team vice president.

The Manitoba Sports Hall of Fame inducted Reardon in 1966. They speak of Reardon's beginning in hockey:

Born in Winnipeg, Ken Reardon first excelled as a youngster in the game of hockey. He won the city playground championship with Clifton Community Club in 1931 and 1932.

He helped the East Kildonan Bisons capture the Bantam Championship in 1933 and 1934 and also helped the Bisons win the Midget City crown in 1935. The following year he won the Juvenile City Championship with the Winnipeg Monarchs.

After two more seasons with the Blue River Rebels of the B.C. Junior League, Reardon joined the Edmonton Roamers in 1938-39 and was a Memorial Cup finalist that year. 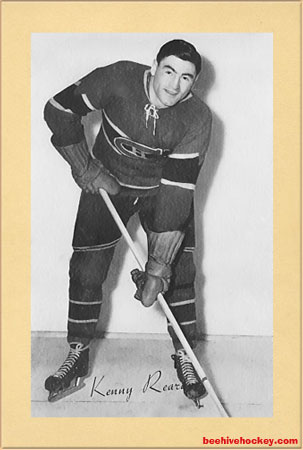 The Hockey Hall of Fame website described Reardon as a "fearless, frightening player. His headlong rushes and all-out physical game left enemies in his wake and himself often injured, though he showed extraordinary toughness in playing while he was in pain.

He had a short career in the NHL, spending several years overseas in combat during World War II. Though never mistaken for a gifted skater or dangerous offensive force, Reardon earned a berth in the Hockey Hall of Fame for his toughness and consistent placement on the league's All-Star teams."