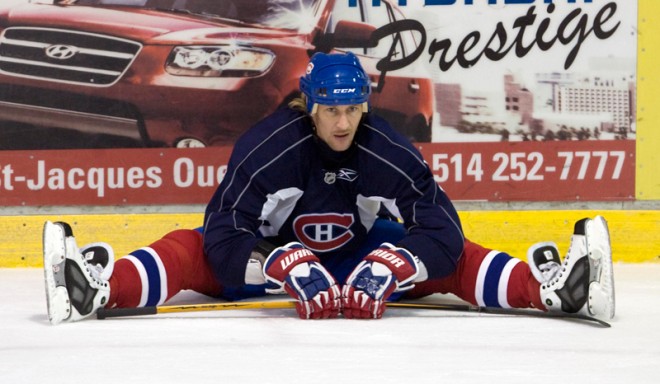 Ah, a double shot of the Bruins, my favorite respected / hated rival. I remember the Bruins glory days and how the Habs used to pick them apart in the most unlikeliest of ways. Not much has changed, except for the calandar date. Speaking of which, the legendary best player of all time, Bobby Orr, turns 60 today. Makes me feel old...

Stephen Brunt of the Globe's article on Orr is essential reading. Why else would I link to a non Habs piece!

Interesting statistic on RDS last night about Alex Kovalev. When he gets at least a point in games, the Habs are 31-7-9 for 71 points. When he's shut out, they are a miserable 9-17-1 for 19 points. Give that the puck...often!

"Of all the teams battling for the top seeding in the NHL playoffs, the one that sticks out is the Montreal Canadiens. When hockey pundits were making predictions for the 2007-8 season, few had Montreal even in the playoffs, let alone contending for first place in the Eastern Conference."

Huge Home And Home - Can The Bruins Beat The Habs This Season? - CP

"They've obviously had a lot of success against us," said Lucic. "You can't take that away from them. But looking at those games, we weren't really smart with our physical play. We took too many penalties. So going into the final two meetings against them, I think we still have to be physical but we have to do it in a smart way."

"In head-to-head games, Montreal has been on the power play 28 times to Boston’s 22. And whether it’s been Francis Bouillon leveling Aaron Ward with an elbow, Mark Stuart dropping the gloves twice against two different Habs pugilists or head coach Claude Julien shouting bloody murder from one bench to the next, it’s seemed that the Canadiens have gotten the last laugh in more ways than goal-scoring."

"Perhaps the awe of Morenz in action was best summed up by another hockey great, Eddie Shore: "(Morenz) had a heart that was unsurpassed in athletic history and no one ever came close to him in the colour department. After you watched Howie you wanted to see him often, and as much as I liked to play hockey, I often thought I would have counted it a full evening had I been able to sit in the stands and watch the Morenz maneuvers. Such an inclination never occurred to me about other stars." - Jennifer Conway

"With all the talk about how calm and poise this young goaltender is, it's hard to believe he is competing for the Calder Trophy. At just 20 years of age, he has gained the confidence of the entire province of Quebec. Price's ability to stop pucks, prevent rebounds and read plays even convinced general manager Bob Gainey to trade away Cristobal Huet to make Price the consensus number one down the stretch." - Chris Bouthillier

"So what is the coach to do? After the game against the Isles, Carbonneau told the crowd of reporters he enjoys the internal competition. "At first, because we were playing Carey more we could see Halak was frustrated. We could see he wanted to play, that he wanted to show what he could do and he's done that." - Tim Parent

"When we start the season, we go with the idea that we want to win every game," said Carbonneau, whose team has a 6-0 record against the Bruins this season. "If we play a team eight times, our goal is to beat them eight times."

"Theodore, the NHL's most valuable player in the 2002 season, had lost the Colorado Avalanche's starting job to rookie Peter Budaj. In a short span, he had gone from all-star candidate to organizational after-thought, a forgotten man in the Avalanche's playoff push a year ago. The fact that he was earning $5.33-million (U.S.) as a back-up goaltender didn't escape anyone's attention either." - Eric Duhatschek

""I think in many ways it was a tragedy, a tragedy for Bobby first, and for the Bruins, and more importantly for hockey fans everywhere. If his injuries happened today, he might have had another 10 years. The sad thing is that more people didn't have a chance to see him play. When you talk about Bobby Orr today, some people realize he is one of the greatest players of all time, but they can't visualize how he played the game." - Harry Sinden 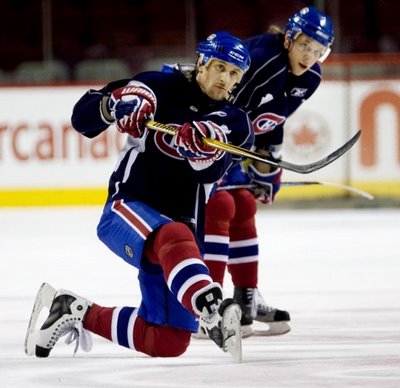 Alex Kovalev: The One And Only - Lions In Winter

"If you ever wanted to know why so many NHL players can't hold a candle to Kovalev, and look like children on the ice when Kovalev applies himself, we should look to this quote. After all, practice makes perfect. And, there is no substitute. If you think about it, Kovalev has probably practiced the one-handed backhand shot more than most junior players practice over a four-year career." - Topham