Gretzky Impressed By Kovalev And The Canadiens

Share All sharing options for: Gretzky Impressed By Kovalev And The Canadiens 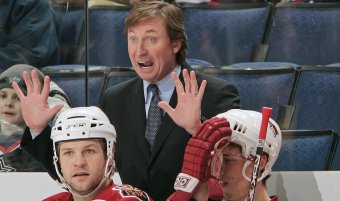 Translated in part from an article in today's la Presse.

Wayne Gretzky didn't spare superlatives when speaking of the Canadiens and their leading scorer Alex Kovalev prior to Thursday night game.

I would have like to hear what he had to say about the Russian sniper afterwards.

Maybe a comment about Ed Jovanovski roughing up Kovy with less than a minute left in the game would have been interesting.

At least Gretzky was kind enough not to compare the Canadiens to any edition of the Oilers great teams - we don't need that! If you recall what such a comparison did for the Senators, that and the story about how they were on a 1977 Habs pace back in November, then it's best that this Canadiens team remains compared only to last year's Habs for now.

According to reports in both La Presse, quoted herein, and the Gazette, Gretzky had lots of good words about our boys in red, white, and blue.

Wayne has never been one to shy away from promoting the game. He's also never backed off from priming an opponant onto cloud nine right before he plays them.

He spoke at length about Kovalev Thursday before the game, and the player's three assist performance.

Kovalev now has 72 points in 68 games - on target for perhaps 90 points if he keeps up his recent performances. He leads the league in powerplay points with 42, and is second to Alexandre Ovechkin with 16 power play goals.Gretzky didn't seem to go overboard when he mentioned Kovalev's name and the Hart Trophy in the same breath. It says here that if the Canadiens finish first in the Conference, he'll garner his share of votes.

The Great One said that if the Canadiens are in the position they are now, it is in great part due to what Kovalev has brought this season.

"Kovalev is one of the most complete players I've ever seen. He's having an exceptional season and should be considered for the Hart because of the success he's had."

Gretzky recalled that former team mate of both he and Kovalev in New York, Mark Messier once said that "Kovalev is a thoroughbred, a rarely seen force of nature. He's in a class by himself physically. Add that to the skills he possesses, through in the good work habits he's practiced this year, and you have one formidable season.

"Coming from a player who's achieved imaginable exploits, that a very nice compliments. I'll gladly accept, but I can't stop at that. My concentration is on how we are going to finish the season out. We have lots of games left to play, and we aren't assured of a layoff spot yet. For myself, I just want to be the best player I can be."

Kovalev, one of the rare players in the league to have had Gretzky, Messier, and Mario Lemieux as team mates says he puts no emphasis or importance on individual awards. 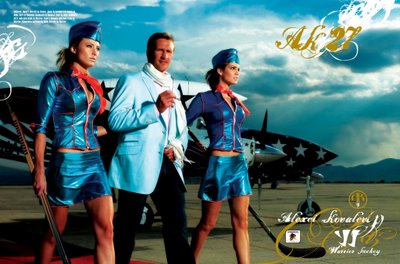 "During the lockout, at the world championships in Austria, I only found out a few days after it was over that I was chosen most valuable player when my agent called to tell me."

Gretzky didn't stop at Kovalev when complimenting the Habs. As Michel Therrien had said two weeks back in calling Guy Carbonneau as his choice for the Jack Adams trophy, Gretzky named carbonneau in a group of four coaches worthy of winning."

Julien, Carbonneau, Boudreau and Tippett are among the best coaches in the league", says Gretzky. Carbonneau and his assistants are doing a remarkable job with the Canadiens."

Still, there is one thing that puzzles the Great One that he has no explanation for: the Canadiens power play.

"I don't get it", he says smilling, "Carbo, Jarvis and Muller were all defensive specialists when they played, and now they own the best powerplay in the NHL."

"I've tried to understand why, but it's still a mystery to me."

Pardon me, to take my guess, but wouldn't a defensive forward have a different insight into what worked best against them in the past. If they were attentive students, and these three and Bob Gainey were some of the best, then they would simply be applying that knowledge in their teachings now.