Share All sharing options for: Gainey's plan coming through 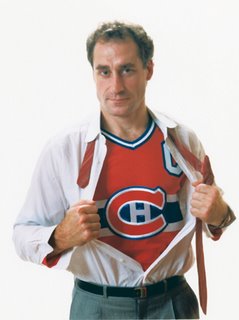 When Bob Gainey took over the GM's chair from Andre Savard in 2003, the Canadiens had just ended a season well below the established high standards of the organization: a meagre 77 points, a fourth-place finish in its division, and out of the playoffs.

Gainey had nowhere to go but up. Even though the team had begun to draft better over the course of three seasons, the talent wasn't yet there. Gainey needed to start from scratch.

The new GM made no predictions. He did not proclaim 100-point season upcoming. The Stanley Cup was never mentioned. He merely said that it is a must that the Canadiens make the playoffs each year.

The road from there to here has been a rough one. There was a lockout season mixed in with two playoff appearances in three years. This season we are finally witnessing the breakthrough of talent often promised by Gainey, and his predecessors Rejean Houle and Andre Savard.

Five years after his arrival, Gainey can now unveil the vision he has had all along as he sits back in his easy chair — the always ejectable seat of general managers.

"The Canadiens were the last Canadian team to win the Stanley Cup", Gainey says. "I want them to be the next team from Canada to win it."

Gainey admits he sweated that notion over the last three years, as Calgary, Edmonton, and Ottawa respectively lost in the finals to Tampa Bay, Carolina, and Anaheim.

"We're improving, we're on the right track," he says. "In regards to experience and competitiveness, we represent a young team still. We possess good young players who are inexperienced and we have others, while being less talented, have a great deal of experience. It's the mix that we need." 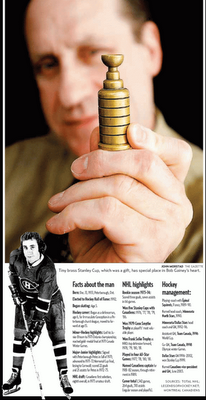 Gainey noted on Tuesday that glory is ever so fleeting in Montreal. After being showered with adulation only three days earlier in the context of his jersey retirement, he was now being raked over the coals for trading his number one goalie for kindling.

Come to think of it, no one can recall the last time a GM parted with his starting goalie in return for a vague second round draft pick, even though at this time, the market for such a goalie was nonexistent.

Gainey surely isn't surprised by the reaction. He knows full well that the emotions of fans rise and fall like the arcs of Russian mountains.

"Over the years, people have helped us by continuously supporting the team and demanding improvement." he states. "The fans represent the soul of the organization. This is their team. Us, we simply try to make it better. They tell us when things are going good, and when they are less so. We don't always give them the impression that we are listening, but we are."

Up until now, the team's performance has been positively stunning considering most observers didn't see the Canadiens in the playoff picture. Gainey, to the contrary, never once stated that he was convinced that his players would be snapping at Ottawa's heels by this time of the season and that they'd be a mere nine goals scored behind the powerhouse Senators despite the loss of Sheldon Souray's cannon blasts.

"At the start of the season, I saw us as finishing anywhere between fifth and tenth," he admits. "Optimistically, I would have anticipated fifth."

That is quite a stunning declaration. It signifies that Gainey was well aware of the chance that his team could miss the playoffs a second year running.

"I would never have predicted us moving by the Senators into first place," he takes care to note, "There were still too many unknown factors and unanswered questions. Our immediate goal was as it always was: make the playoffs, gain experience, and in consequence, build up our confidence."

Gainey has been in five Stanley Cup parades as a player. He knows how crazy with joy the city gets in such times. Asking him if he'd like to relive such euphoric moments is kind of like asking him whether he enjoyed himself last Saturday night.

"One of the big advantages of playing in Montreal is the response that the team elicits from its public, the support they give us, the joy they feel when the team does well and the profound deception that manifests itself when it doesn't," says Gainey. "That parade is the ultimate expression of the fans' happiness."

At the moment, the fans might be in that latter mood, but two or three wins in a row, and the events of the week will be forgotten.