Canadiens Must Adapt To The Climate Of Opponents

Share All sharing options for: Canadiens Must Adapt To The Climate Of Opponents 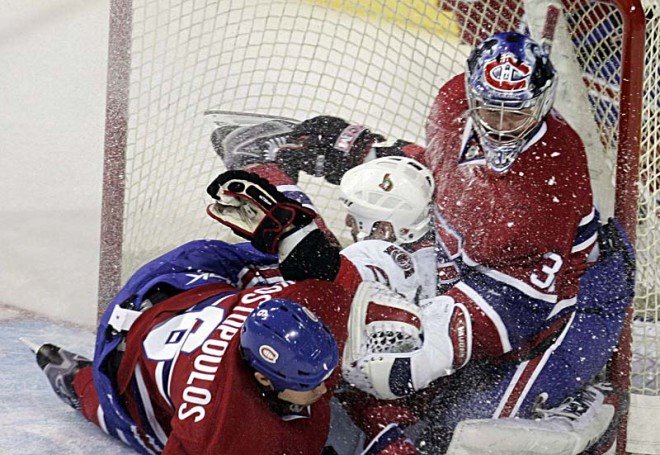 Dropping from first to fifth with a single loss seems like an extreme proposition, but that is exactly what happened when the Canadiens fell to the Ottawa Senators 3-0 last night.

The Habs, along with their fans, were riding a euphoric wave with the team in top spot. The loss should be taken in perspective and the desolate knee jerk overreaction needs to be nipped in the bud.

Despite the score, or the shutout, this is one loss that doesn't deserve a doomsayers autopsy.

Things change fast in the cluster standing of the Eastern Conference. The Devils team that the Canadiens undid so neatly just two days ago now finds itself back on top.

Saturday night, with a win against the Islanders, the Canadiens could be right back where they were prior to the drop of the puck on Thursday.

Last night, our red, white, and blue pride found themselves strangled by a pair of goals God himself could not prevent.

Carey Price, for all the accolades thrown upon him, remains mortal. A deflection goal followed by a dubious over the crossbar tip in that seemed to be waved off initially were what sent Montreal in a hole they never dug out of.

What is most disheartening is that the Canadiens cannot seem to beat the Senators this season. Montreal has lost five to Ottawa, a team they have only beaten once this year. The two remaining games between the rivals will go along way towards settling which team takes top honours in the East.

It's not so much that the Habs can't vanquish Ottawa, it's just that they have yet to learn how to.
As with many things when dealing with a young squad, learning to overcome a fierce opponant takes time, patience and steady progression.

Every rival approches battle differently and what works against certain teams doesn't always apply to others. 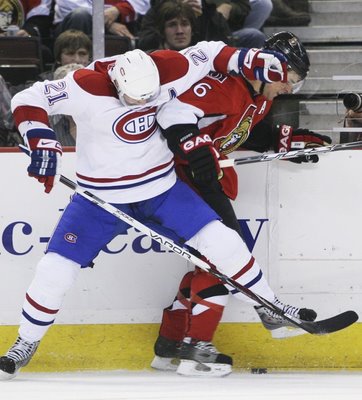 The Canadiens are a team that utilizes speed as it's main artliary. They force opponants back with their offensive thrust with the goal of creating turnovers, mistakes and penalties that will lead to scoring chances and goals. Their weapons work against the majority of teams because the Canadiens are deeper at most positions that their foes.

It is not uncommon for teams in progression to hit a snag in the form of a team that is capable of disrupting their game flow.

Ottawa does this to the Habs. New Jersey used to have the same effect.

As a team that has gotten where it is by sticking to the notion of playing their own game and forcing the opponant to adjust, Montreal must now learn how to bring to their game an extra added dimension. Against Ottawa, a team they match well against, the Canadiens need to employ different tactics. They need to divert the Senators focus and upset their method of doing things.

Last night the Canadiens weren't dominated by a large margin of shots on goal. They actually outshot Ottawa 28-24. The Senators best defensive pairings blocked an additional 24 Habs shots. The Senators led with 17 shots fired wide, to the Canadiens six. In the hits department, the Canadiens had the upper hand as well, 33-23, with 6 credited to the Sens' Mike Fisher.

Montreal won 57% of the faceoffs as well, a number above their normal rate of performance.
The difference on the scoreboard at the end of the game was the only place where the Ottawa showed supremacy. It reflected their 2 power play goals from three shots taken during five man advantages. The Canadiens shot seven times during four chances and couldn't find the mark. 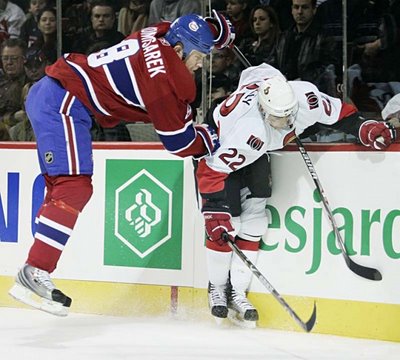 What the Habs failed to do last night was compete heartily in the emotional department. With Ottawa gaining an early edge they systematically shut down the Canadiens with low risk plays and positional poise. They took no chances from the time it was 1-0, and the Canadiens sadly fell asleep.

The Canadiens rarely crowded the crease after shots or before them. They didn't hit as often as they had the chance to and when they did it was often a polite "just doing my job" kind of bump.

I didn't see the face wash gloves come up - a great and useful tactic in frustrating opponants that goes uncalled 99% of the time. Chris Neil was absent to police the proceedings yet Montreal did nothing to get under Daniel Alfredsson's skin. They did little all game long to disturb, upset, irritate, provoke, or inspire Ottawa to become unglued.

Players such as Wade Redden, Jason Spezza, and Fisher are easily rattled this way, but the Habs let them be. Ottawa were able to implement their game with ease, as their lines were rolled with hardly a disruption.

Meanwhile, the Canadiens continued on, trying to play their game against Ottawa, long after the contest seemed settled. Perhaps the Habs were fearful of taking penalties, but you can't approach a game with such fears and expect to compete.

Where was the size and command from Mike Komisarek and Ryan O`Byrne? Where was the usual grittiness deployed by Saku Koivu, Chris Higgins, Francis Bouillon, Tom Kostopoulos, Guillaume Latendresse and Maxim Lapierre? 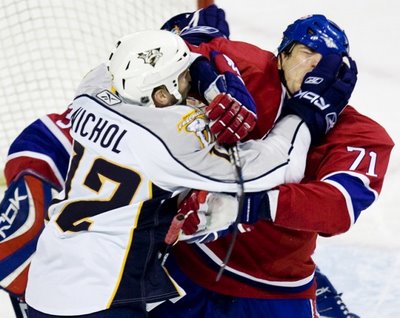 The Habs seemed to throw all their hopes in the Alex Kovalev line's efforts and Carey Price stopping the Ottawa big three.

What I'm most anxious for, is the return to the lineup of Steve Begin, who surely wouldn't tolerate such a lowering of arms in battle. Begin would've been eating the boards wood to get at the Senators last night, and the team misses him big time.

The Canadiens have accomplished a large amount of experience growth this season. They have done it to the general surprise of many teams in the league who are now coming prepared to thwart what the Habs do best.

The recipe for winning at this time of the year changes, and it often depends on whether a team can adapt it's game to suit an opponant. Simply settling on being an offensive machine won't cut it.

This young team must now adjust.