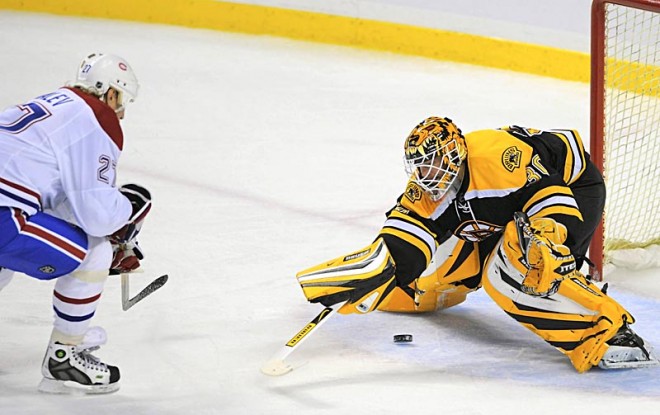 Did Alex Kovalev sell his training tips video tonight or what?

Kovalev's two second period goals might just be the prettiest pair of goals he's scored this season, and they couldn't have been more timely as they lifted the Habs from a sludgy first half of the game.

Good as it was to see Ryan O'Byrne back and Maxim Lapierre having a standout game, one has to be concerned about the loss of Mike Komisarek . The extent of the injury is not yet known but with the minutes he eats up, the hits he dishes, and the shots he blocks, it will be very difficult to fill his slot.

I hope Carbo isn't thinking Patrice Brisebois again! Reader Wamsley informed me earlier today that the Habs are 17-16-6 with Brisebois in the lineup, which means they are 27-8-4 with him on the pines.

Or to put it another way, we are the Maple Leafs when he dresses and the Red Wings when he's absent.

Take a leave Breezer, here's some free tickets to Paris!

Carey Price was solid as a rock again tonight, being beaten by only a deflection and another shot after he was bumped on a play that deserved a closer look by officials.

Latendresse made a great play to feed Saku Koivu on an angled pass off the backboard to led to Michael Ryder's winning goal. He did all the little things in a big way tonight.