After Handling Kings, Will Habs Get Crowned?

Share All sharing options for: After Handling Kings, Will Habs Get Crowned? 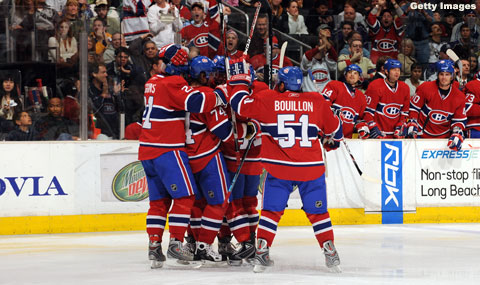 It's called winning ugly, and although the Canadiens have come out victors in the last two contests on Western soil, the wins haven't exactly been 60 minute efforts.

The recipe they are employing will not work against the Anaheim Ducks.

I would be quite surprised to see the Canadiens play in the same manner and beat the defending Cup champs.

Succinctly put, the Habs defensive lapses have been ably served by the league's best offense and powerplay, and it is beginning to look as though players are taking shortcuts.

Counting on the Canadiens offensive depth to see themselves through may work against the lowly Kings and young Coyotes, but it will spell disaster come playoff time.

The troubles begin with giving on way too many shots on goal.

That wouldn't be much of a concern if the majority were of the perimeter variety, but defensive lapses are causing great scoring chances for the opposition. Sooner or later, it is going to bite them in the......wait a minute....this is what happened against San Jose!

The sins have been plenty.

What is undoing the team is a lack of focus on the small details. Not finishing checks and taking opponants out of the play. Hanging around too long in the offensive zone after a scoring opportunity has passed. Cheating on the breakout pass.

Some players, namely Mike Komisarek, Andrei Markov, Chris Higgins, Tomas Plekanec, and Alex Kovalev have not offered their complete focus of late. As leaders, they have set the table for others to follow.

The concentration just isn't there. 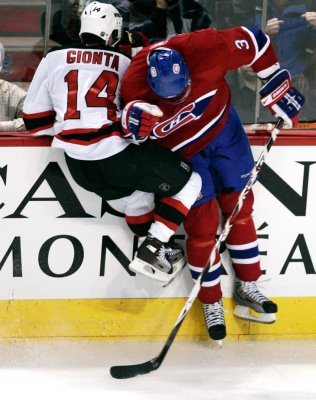 Much of what the Habs are doing wrong these past few games have taken away from their need to be a positional team when defending. They are not in the position to block shots or cut off passing lanes.

Were it not for the brilliance of a pair of young goaltenders, the team would be starring down an 0-3 road trip.

After tonight's tilt with Les Canards, the Canadiens have 12 games remaining in their season, and it is of prime importance that the focus on padding offensive stats is shifted to tightening up their complete game. They did it against New Jersey last Saturday, and they will need to evoke such staunch charity for the remainder of their schedule.

If the Canadiens wish to be crowned either Eastern Conference champs or Northest Division champs they have to sharpen up, as nine of their remaining 12 games are against inner division rivals. As things stand presently, the Habs are a point back of New Jersey overall, and two up the Senators with a game in hand.

That game being today's against the Ducks.

If Montreal were to pull it off it would open up a four point gap between themselves and Ottawa. With a favorable schedule down the stretch - 8 of the 12 games left are at the Bell - the Habs have their destiny in their own hands for now.

Aside from playing each divisional rival once on the road, the Canadiens 8 home games include hosting the Leafs, Bruins, and Sabres once, and the Senators twice. The three remaining games at home are against the Islanders, Blues, and this coming Tuesday against the Devils.

I see the Canadiens needing 8 or 9 wins in the balance to remain at the top.

Wins against the Ducks and Devils via sound team efforts, would go a long way towards making the Habs post season run a more assured one.