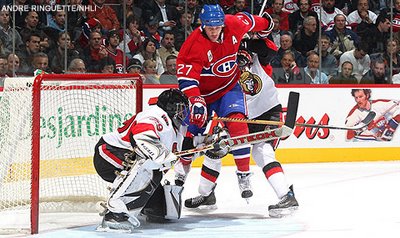 The Canadiens 4-3 edging of the Ottawa Senators on Tuesday could serve as a template game for what has often gone wrong for the Habs at home this season.

As often happens when home teams get an early first period jump on its opponants, personal showings take over from team perspectives, and the focus strays into dangerous territory.

Sometimes they are tempted by alluring one game offensive output, and other times it is their toughness that is put to question.

In the Habs case, one doesn't need to look far back for examples.

On Sunday, the Canadiens built up a three goal lead over the Rangers, only to watch it evaporate within a period. They squandered their margin with undisciplined play after being suckered into retributional penalties by New York. It only took a couple of incidents in which the Habs players sought to settle scores, to tip the balance of play the Rangers way.

This has happened to Montreal quite a lot this season, especially on home ice and Rangers coach Tom Renney set the ploy and watched Montreal play right into his hand.

Montreal's forte at home is its ability to roll four lines and control the game's flow with its speed. Throw a few penalty kills into the spokes of the Habs wheels and off comes the tire thread. The lines go off balance as players begin to skip turns. The next thing you know, that comfortable flow to the game is gone, and the momentum has swung. 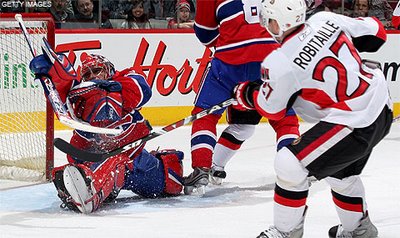 The Canadiens have been much better at not getting goaded into such ploys this season. Last year, stand up team guy Sheldon Souray often could not help himself. The temptation to get the upper hand physically, to meet teams evenly with the eye for an eye approach often means expecting a finish like those we have witnessed the past two games.

Earlier this season, shortly after being called up, Max Lapierre took a few shots in the press for not sticking up for a player when the situation called for it. His character was quickly questioned, but the teapot tempest was short lived as soon as Max was back at his old ways and getting in players faces.

Seems sometimes a player can't win either way, for their reaction.

Lapierre was perhaps being cautious not to overreact and put his team in jeopardy. He chose being selfless over selfish, and the lack of reaction would have been lauded as discipline had the Habs won that game. Instead, the opposite occured. 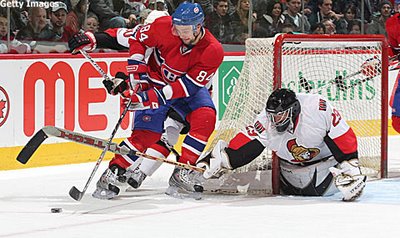 Last night against Ottawa, I found that the turning point in the game came well before things turned Ottawa's way. In the second period, leading 3-1, Montreal's achilles heel was tested as the Senators played the agitator to a Canadiens componant who didn't bite.

On multiple occassions, Chris Neil was in Mike Komisarek's face, just daring him to dance.

Thinking smartly rather than selfishly, Komisarek stayed the course and stood still. No one will question the rugged defenseman's guts.

Komisarek could have easily dropped the gloves and gone bop to bop with Neil, but it would have accomplished nothing. The defenseman likely understood that a 2 goal lead on the Senators half way through the game meant little at that point. Perhaps he even remembered a game back in October when the Habs led late, only to lose in the final two minutes to a surging Ottawa attack.

The Senators, despite their recent incognito appearance, are a proud bunch, and they surely were not going to sit back and watch Montreal dance all over them. You could almost cue the comeback, and it would only have begun sooner with Komisarek off for five on a night when the Canadiens were without Roman Hamrlik.

Instead the Canadiens sought a different type of unfocussed selfishness against Ottawa, and it is one that can be equally messy. 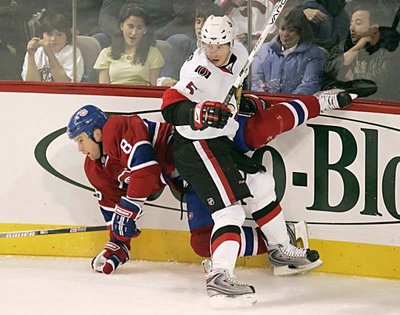 With the score 4-1, the Canadiens, not sensing Ottawa was on the brink of turning things around, got caught up in the idea of running up the score. This against the one team higher than them in the standing!

Rather than clamp down on the Senators rushes, the forwards began to cheat and turn up ice before pucks were destined to them. They stopped finishing their checks. They no longer came back deep to back check.

This lack of focus caught up with them on a line change, and players scurried from two zone pass by Ottawa that sprung Jason Spezza loose on the Senators second goal.

The Canadiens were putting on a home ice show up to this point, a dazzling display of offensive prowess that led to some equally sizzling highlight reel moments. Of course, as is only natural, the Habs players wanted to take full advantage of Ottawa having an off night.

The only problem was, the Senators weren't so much having an off night as they were being handed their collective asses to them by the Habs.

The Canadiens were madly outworking them, but the fact that the Habs third and fourth goals came easier than the first two allowed for Montreal to misread what was realy going on. It was from that point on that the Habs began to work differently, and less effectively.

Everyone will recall the spinarama dipsy doodle backhand miss that left Alex Kovalev behind Martin Gerber in the Ottawa net on a gutsy individual effort. He was cheered loudly for the play, but it wouldn't have been so cute had Ottawa rushed down ice and scored.

This play, although it pulled me to my feet, typified what Montreal was misguidedly doing to themselves by the second period's end. Individualism had taken over presidence on smart poised plays that shut teams down.

As Montreal had done to Ottawa, the Senators, with the Habs unfocused, began doing it back to the Canadiens. 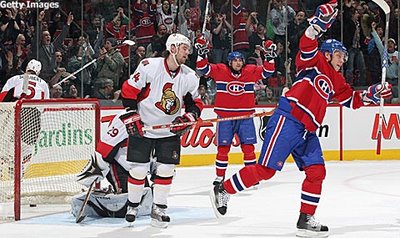 From the third period on, the play had shifted, and for awhile they failed to recognize that it had. They began running around, somewhat frustrated that the offensive night they so soon envisioned, had disappeared from their grasp.

A benchmark moment that occured, that showed the tide's turn, was an undisciplined penalty taking by Saku Koivu, in the offensive zone - no less.

Fortunately, the penalty was killed off, and the Canadiens regrouped and refocused as Koivu remained on the bench.

From the Rangers game to the Ottawa scare, perhaps a lesson was taken. The trend is there for all to see and learn from.

Including last night's game, the Habs have outscored the opposition 55 to 34 in the first period. In the second, it narrows to 60 - 56. By the third, the margin is practically gone, with the Canadiens holding the slightest of edges, 52 - 51.

If Montreal wants to improve its home ice record, these two most recent games can serve as transition point in how they can begin to correct what it is that leads them astray.