Share All sharing options for: Price, Bulldogs Shut Out Moose 2-0 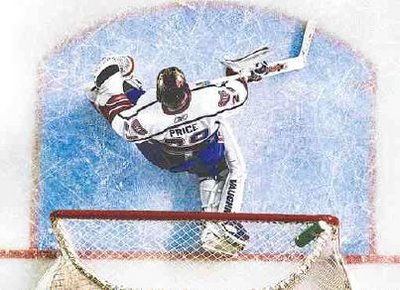 From Our Sports Central

Backed by unbeatable goaltending courtesy of Carey Price, the Hamilton Bulldogs defeated the Manitoba Moose 2-0 Saturday night, sweeping the two game series between both clubs. Duncan Milroy and Corey Locke scored for Hamilton, while Moose netminder Drew MacIntyre made 25 saves in his 12th loss of the season.

The Moose - Bulldogs rematch started slowly, with both teams registering a combined three shots on net in the first eight minutes. A hooking penalty to Zack FitzGerald offered Hamilton the game's first powerplay at 2:38, but the visitors were unable to beat Drew MacIntyre on the man advantage and both clubs continued to strive for the game's opening goal.

Manitoba and Hamilton traded powerplays through the latter half of the first period, but with the notable exception of a Bulldogs shot that rang off MacIntyre's post, scoring chances were limited through to the first intermission.

Consecutive Bulldog penalties early in the second gave the Moose a one minute two man advantage. Although the home team was unable to beat Price, Manitoba used the powerplay to overtake the shot lead by tallying 16 to Hamilton's 10 by the 10 minute mark.

Despite carrying much of the play five-on-five and firing 11 shots on Price, the Moose couldn't break the stalemate and both clubs headed off the ice without a goal.

Hamilton narrowed the shot gap in the first half of the third, but Price and MacIntyre - as well as MacIntyre's posts - stayed solid.

With six minutes left on the clock, Hamilton's Daniel Corso shattered the scoreless game. The persistent center plugged at the puck at the corner of the Moose net and slipped it past MacIntyre to put the Bulldogs up 1-0 late in the game.

In a last-minute attempt to tie things up, the Moose pulled MacIntyre and played six skaters, but the strategy resulted in an empty-netter for Corey Locke and the Bulldogs stole two points for the second straight night with a 2-0 victory.