The Power Of Team Effort.

Share All sharing options for: The Power Of Team Effort. 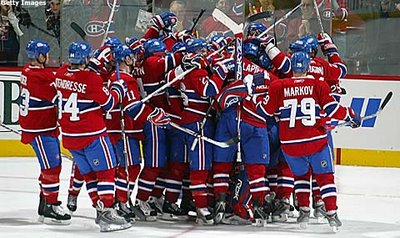 It was a comeback of unforeseen proportions.

In the 99 year history of the Montreal Canadiens, no edition of the Habs, not the fifties five in row dynasty, not the four in a row Cup champs of the seventies, has ever pulled off a 5-0 come from behind win.

I feel like I am high on something as I type these lines out, and it is a feeling I have not felt about this TEAM in ages.

As much as I have been thrilled by the play of the individual talents that make up the Montreal Canadiens today, I am completely blown away by the TEAM they have become of late.

They are a TEAM, a gelled unit all working in the same direction for each other for the benefit of they goal they share.

This TEAM has it's eyes on the prize! 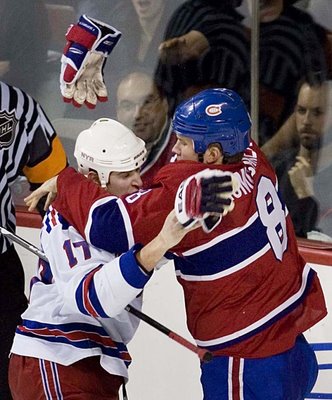 I claim that it takes a special TEAM to accomplish such a rare one in a hundred year feat, and this Habs TEAM has recently found the ways to dig deep enough to find new ways to win games.

The boys had rarely won games coming from behind in the first half of this season until they turned the trick against New Jersey, a few weeks back, in the hellish confines of the Devils home ice. Winning where they had not claimed victory in years seemed to serve notice that these Canadiens were on the rise.

Last week they unshackled themselves from the death grip of the Florida Panthers smothering system to pull a rabbit from their hat late in the game.

This latest escape against a Rangers team that had them tied and bound is their ultimate Houdini!

The historic win will long be remembered for several reasons.

I'll never forget Alex Kovalev, throwing his entire body into the shot that gave the Canadiens the tying goal, so much so, that he rolled over himself onto his back and went fetal. Kicking legs and pumping arms, Kovalev rose with the snow on his back into a jubilant glee that was one of the most awesome goal celebrations I can recall. The Bell Centre crowd erupted as a whole and it looked like Kovalev's limbs were being raised by the simultaneous momentum of the fans motions. 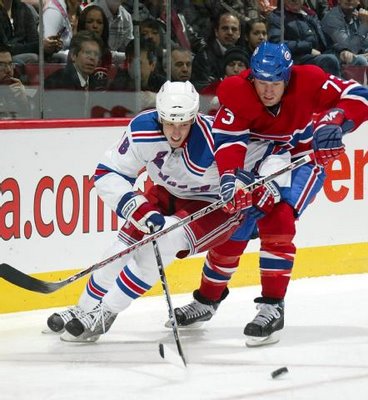 This was also the game where I noticed a "C" fading into the jersey of Mike Komisarek. Rarely in the last decade, probably not since the days of Patrick Roy, have I seen a player so upset and outright pissed about being down in a game. It's also been that long since I witnessed a Habs so angered and disgusted with a game situation that he went out and lit a fire under everyone with his actions that it not only inspired a team, but also torched an arena of fans. Komisarek was more than willing to do anything to gain this game back, and he hit and fought with passion and determination to achieve it.

I saw Michael Ryder reborn and invaluable for the first time this season. The doubt and hesitation that has plagued him all season had vanished to reveal a Ryder who does things as instinctively as he always has. I've often been on Ryder's case this season, but last night I was able to feel good for him for the first time in a long while. I'll be watching him closely over the next few games in hopes that this injection of confidence helps to re-establish his role on the team. He deserves full credit for his part in this historic win.

There was Cristobal Huet, the most sedate and stoic starting goalie in the league, leaping into the arms of the first player off the bench - Komisarek - after foiling Jaromir Jagr in the shootout to preserve the win, notched just seconds before on a beauty move by captain Koivu.

I saw the freight train that was Steve Begin, role player par excellence, going off the tracks like the unstoppable force attempting to shove back the immovable object.

His gestures typified what the TEAM were accomplishing as a whole. 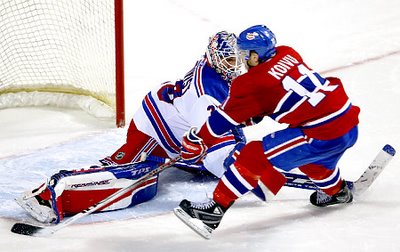 Yesterday, before this game, I was listening in the car to former Habs player and GM Serge Savard on CKAC speaking about Bob Gainey, in reference to the current man in power's upcoming jersey hoist.

Savard was lured off topic and hardly baited into talking about the present edition of the Canadiens and where they are heading.

The former man in charge, who in his heyday as a player was both a star and a team leader, candidly admitted that he has seen something quite distinct about the 2007-08 Canadiens TEAM. Savard said that the manner in which they were playing for each other and not individually, was very telling. He continued with the TEAM theme, and pointed out the leadership that was coming from its role players and even it's rookies. He suggested that when everyone is on board, heading unselfishly in the same direction, and settling for nothing less that victory, that amazing things can happen. 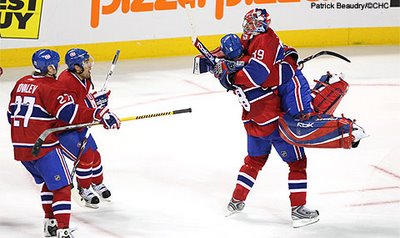 Savard needn't refer to the Habs glory days in which he partook in annual parades to testify that he knew what he was talking about. Instead, Savard took on the perimeter outlook that perhaps only a GM can sense and told of two previous occasions where he'd felt the same TEAM atmosphere building into something very special.

TEAM wins both - by players united that believed that together anything could be conquered.