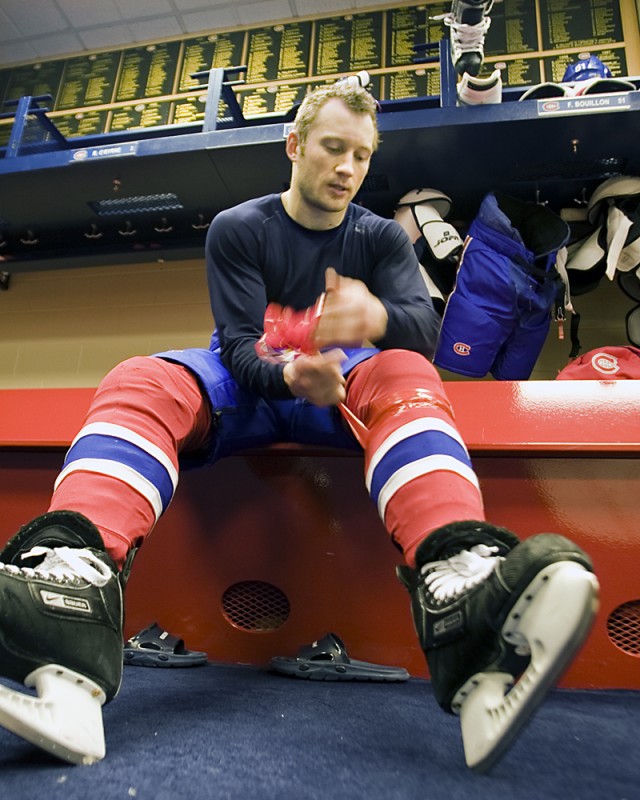 Going into the 2007-08 season, many assessments of the Canadiens standing were based on the upside of the team's number one line of Saku Koivu, Michael Ryder, and Chris Higgins.

While each member of the trio were coming off career best seasons of sorts, the predictions remained grim for the Habs, and the 80 or so goals brought by these three players rendered them something less worthy than a true number one line.

That might have been the reality in some people's eyes before the season, but the perspective now is greatly different as the former number one line is no longer alone in expectations to shoulder the load.

In fact, Koivu, Ryder, and Higgins are not only not the team's top line this season, they have only played together sporadically. This season, Koivu and Higgins have been whittled down to a duo more often than not, as winger Ryder has struggled to find the scoring touch that placed him on the captain's side since his rookie season.

At times the duo have been flanked by the likes of Guillaume Latendresse, Mark Streit, and most recently, and seemingly with permanance, Sergei Kostitsyn.

Had Ryder been a constant on the scoresheet since October, all this neccessitated juggling would not have been required. They have been reunited on occassion, and they either ignite sparks or sputter to a stall, depending on the opponant and perhaps the ebbs and flows of games.

In sprinklings of games during the month of February, the trio has been reborn of sorts. The line has seen more time together and success seems to have found them more often. Perhaps rebirth is a premature word, but all three former linemates have been turning in more inspired performances of late - most recently Higgins 2 goal effort against Atlanta on Tuesday. 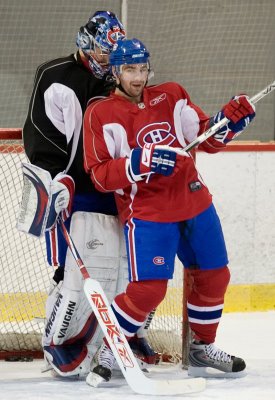 Last week, Ryder lost a hat trick on a deflection of Streit's ankle, and Koivu has begun to resemble the whirling dervish we've always known him to be.

What has been noticable most, is that in games where these three players point, the Canadiens win.

The brunt of the Habs offensive thrust this season may be carried by the team's nouveau top trio of Alex Kovalev, Tomas Plekanec, and Andrei Kostitsyn, but as perspective renders reality, the contributions of the Koivu line as reinforcement leading into the playoffs are becoming essential.

Against top teams, the well rounded ones, top lines can get shut down from game to game, and this is exactly where the importance of Koivu, Higgins and Ryder come into play. The Plekanec line, who I like to call the Tomahawk line ( Toma + AK + AK ! ) will not be able to carry the Canadiens offense alone come April. Team depth wins playoff rounds, and the Koivu line's resurgence couldn't come at a better time.

It has been a rough season for the three so far, and each have had their issues to overcome.

For Koivu, his struggling and slumping linemates have affected his point total and perceptions of his overall effectiveness and team worth. Even through successful stretches, the exasperation and frustration of the failures of his line to produce were evident on Koivu's facial expressions.

One can see and sense that he wants more for his team and from himself, but varying situations from game to game have dictated otherwise. The captain has batlled, sweat and bled for his team over the years.

In the Habs dressing room for all read daily is the Flanders Field quote, "To you from failing hands we throw the torch, be it yours to hold it high." The quote is most often taken in the context of retiring players passing on the flame to a group of players that will carry on the Canadiens tradition.

Koivu may well represent the first Habs captain, active and still capable, whose gestures and plight actually suggest that all hands together must grab the flame and hold it up.

Koivu has been inspired as he finds himself surrounded by the most solid Canadiens team since his rookie season over a decade ago. His inspiration has worn of on his linemates. 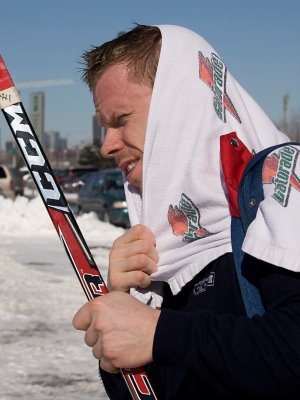 Michael Ryder is scoring again and that is great news. Lately he has shed the split second of hesitation that has bogged him down this season and in games where he has been successful he is making smarter choices with the puck when scoring opportunities aren't present.

This season Ryder has attempted to become a more complete player and has focussed on his play without the puck. By becoming less of a deficiency in 5 on 5 play, he has been more properly positioned than before when the puck isn't on his stick. He is reading the play better, and often it has hurt his offensive game as it has caused a hesitance in what was always instinctive in him. Not the most fluid skater or passer, Ryder of late is choosing the simpler plays when carrying the puck and is not turning the play over as often as he was in the first half of the season.

Ryder has found success lately through this simplicity and is learning to be open in different ares of the offensive zone. Standing still less often and variying his positioning has made him a target for Koivu and his defenseman's passes once again. The split second he has gained back is serving him well.

Chris Higgins style of play involves many elements in tandem with center Koivu. He takes his roles seriously to heart as he tries not only to be defensively sound but offensively effective.

Battling hard in the corners to win the puck, Higgins has more shots on goal than any Canadien this season. When not emerging victorious from the corners to shoot or pass, he is adept at crashing the net for rebounds. It is this last facet of his game that has been successful of late.

When the three play together and are all on their game, their strongpoint is cycling the puck behind the net to create scoring chances in front of it. When they haven't been united, the flip flopping of Ryder with Sergei Kostitsyn between the second and third lines has helped the production of both trios, and as long as these two player continue to pop in the odd goal every other game the Canadiens will be well served offensively.

With seven players topping the 40 point mark and nine goal scorers in double digits, the Canadiens offense is neck and with Detroit and just an offensive outburst away from catching the Senators.

The balance is enviable and with a hot scoring second line the Canadiens should be hard to stop. Should Koivu keep playing with the renewed zest he has shown, and Ryder and Higgins keep finding the net, the Habs should be served well down the stretch.