Huet Is Out, Price Is In

Share All sharing options for: Huet Is Out, Price Is In 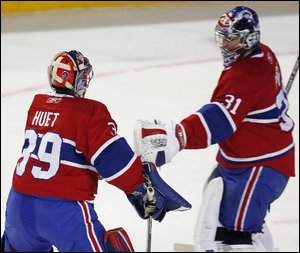 Robert L Note: I'm not crazy about this deal, but it can be assumed that Bob Gainey didn't figure on resigning Cristobal Huet this summer. With Jaroslav Halak doing so well in Hamilton, and a offer of a second round pick coming to his way, Gainey perhaps felt that Huet's stock was as high as it was going to get.

Here's the TSN take on the deal:

The Montreal Canadiens have traded goaltender Cristobal Huet to the Washington Capitals for a second-round draft pick.

With Huet dealt, the Canadiens have turned to 20-year-old Carey Price as their third starting goaltender in as many seasons. Ironically, Huet became the team's new starter in 2006, when general manager Bob Gainey dealt former Hart and Vezina Trophy winner Cristobal Huet to Colorado on the eve of the trading deadline.

Huet is in the final year of a two-year contract and will become an unrestricted free agent this summer.

Keith Jones on Huet: "I'm shocked. I don't think they got enough for Huet... The Montreal Canadiens have had succeess going with rookie goaltender in the past... But I'm surprised the market was so small for Huet."

More on this as it comes in.