Hossa Has One Foot In The Bell Centre

Share All sharing options for: Hossa Has One Foot In The Bell Centre 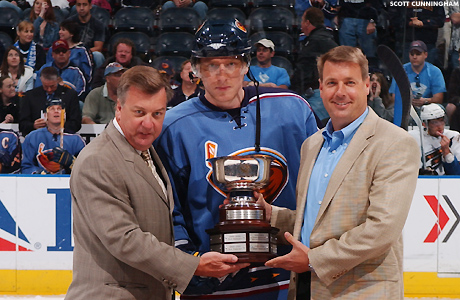 Robert L note: I was hearing about this Mathias Brunet piece from La Presse as early as 2 A.M. on CKAC. He it is transcribed. Oh boy!

There is no other evidence as of yet that La Presse can use to confirm that the Canadiens and Thrashers have in fact sealed a deal, but the paper has learned that as of yesterday, an equipment order in the colors of the Montreal Canadiens has been made in the name of Marian Hossa.

Orders as such don't necessarily mean it's in the bag. Two years ago, an order was placed for Nikolai Khabibulin and Adrian Aucoin in the Canadiens colors, but Aucoin broke his ankle on the eve of the announced trade and everything was annulled. The word was they were all but headed to Montreal for Jose Theodore, Mike Ribeiro, and Pierre Dagenais.

It is also possible that a GM changes his mind at the last minute in light of a better offer.

However, orders are not placed with equipment manufacturers unless talks have reached serious proportions. Companies can take a day to manufacture a pair of gloves or pants to an athlete's specifications and the Canadiens would be placing the order to have the equipment ready for the player's timely arrival for the next game.Names circulating as going the other way were Michael Ryder and Mark Streit, and either a prospect or a draft pick, but nothing existed to confirm as much.

During the last day of General Manager meetings in Naples, Florida yesterday, certain rumors were jumping the gun. Late yesterday afternoon the CBC had posted on its website a trade sending Michael Ryder to Calgary in return for Alex Tanguay but the news was quickly and quietly pulled.

Several hints recently pointed to Bob Gainey and Don Waddell pulling off a big deal. Gainey hasn't hidden the fact this week that he's looking to add an impact player to the lineup.

Waddell has taken in some Canadiens games over the past two weeks and even skipped his own team's practice to watch the Canadiens play in Florida eight days ago. At the Bell Centre, Waddell joked with the local press that he was in town to watch a player who wasn't even dressed (Michael Ryder). 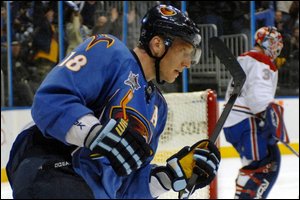 The Thrashers GM has maintained that he wants to aquire players that could help Atlanta in the short if he should part with Hossa, since he considers his team still in the running for a playoff spot and perhaps even first place in their division. He has also made it clear that he is seeking an offensive defenseman.

Marian Hossa, Mark Streit and Michael Ryder all have identical contract situations and will be free agent at the term of the season. It is not out of the question that the teams involved has given each permission to talk contract with the players they would be acquiring. CJAD analyst Murray Wilson had declared on air that Gainey had received such a privilege from Waddell to talk contract with Hossa.

Hossa, who is making 7 million dollars this season, has seen his numbers drop below standard with 53 points in 58 games, but notched 100 and 92 in the two preceding years. He remains one of the most gifted wingers in the league.

Here's hoping for the Canadiens sake that Hossa remains as prolific as before and that this formidable player fits nicely into that new equipment...