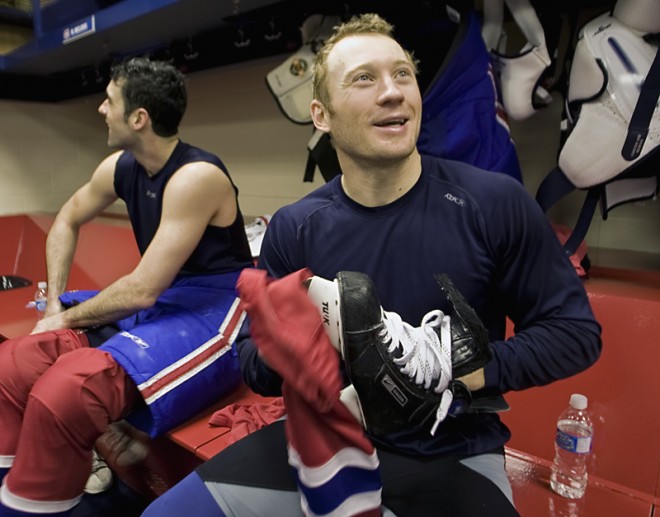 Translated from an article in today's Le Journal

Maybe it is the fact that he has become almost immune to such talk, but Michael Ryder didn't seem too bothered yesterday by the mounting rumours that he is on his way out of Montreal.

"I don't know what I can tell you", Ryder said while removing his equipement after practice, "We'll just have to wait until tomorrow."

All that is known for now is that the winger from Newfoundland is not a Calgary Flames - where the rumours said he was destined.

Flames General Manager Darryl Sutter was unequivocal yesterday in maintaining that Alex tanguay would not be moved. Not yesterday. Not today!

For his part, Ryder says he is not following the rumours.

"I'm not up on it", he admits, "I'm just following my normal routine when I leave the Bell Centre. After that, it's just a waiting game."

Team mate Chris Higgins didn't hide behind the fact that he would be saddened to see Ryder leave. The two are close friends.

"I hope he stays. He's my best friend on the team and we room together on the road. Things would be different for me if he left."

Higgins doesn't consider himself untouchable either, even though Bob Gainey declared last Friday that he did not want to cut into the core of the team when dealing.

"When the manager states that he is in search of an impact player, then it becomes evident that roster players could be asked in return. When the GM makes such a declaration, rumours circulate in no time."

Higgins admits that all the trade scenarios being bandied about are a distraction for him.

"I'm not wondering whether I'll be traded, but it is a relief when it is over."

Mike Komisarek won't be sitting down to watch it unfold.