Habs Have Hots For Marian Hossa

Share All sharing options for: Habs Have Hots For Marian Hossa 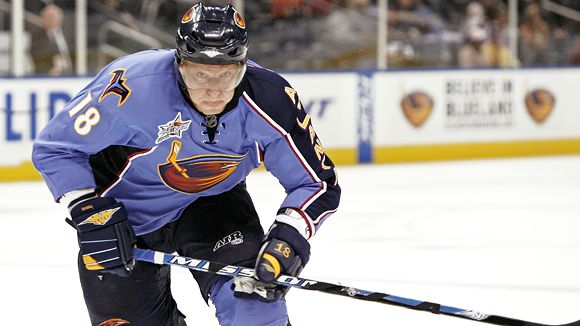 You have heard, and will continue to hear, rumours concerning Atlanta Thrasher's impending UFA Marian Hossa in the next 18 days. As trade deadline day looms large, the prospective landing destination of Hossa will be a hot topic until his future is decided.

It only makes sense - Hossa is the best player available from this year's rent a player crop.

The 29 year old Slovak is about to enter the peak years of his career, and the writing is on the wall that he will not be resigning in Atlanta.

Now there is writing on the wall, and then there is reading between the lines!

Another good, applicable hockey cliche is, where there is smoke, there's fire!

Hossa is into the third year of an 18 million dollar contract with the Thrashers, and money can't be the reason he hasn't resigned - he's already getting it in spades.

I'd assume that if Atlanta wished to retain him, and surely they do, an offer of a million or so per season raise over an extended five years would do the trick.

It would be a fair evaluation of his worth in today's market.

Some will surely suggest he's not worth it, while others might admit he could wrangle even more from the right team.

As often is the case with players nearing the age of thirty who have yet to win a Cup, money and loyalty suddenly become secondary concerns to the almighty coin.

Hossa is as good as gone from this southern state, and everyone from the player, to the agent, to the GM holding his rights, is not foolish enough to lower their guard and admit it. Admissions in such scenario's cost dollars on one hand, and bargaining power on the other.
Mum is the word - usually! 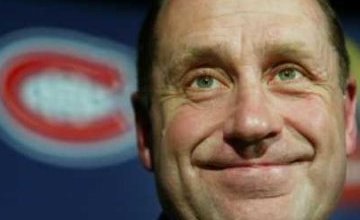 When the player's agent, and the team's GM start offering public denials on record, involving a player's contract, it is the scent of damage control.

Again, where there is smoke.....you can sniff it!

Last season, for inexplicable reasons, the Thrashers sold the farm to get their mits on Keith Tkachuk at the trade deadline. They now have to replenish the sold off assets, and Hossa is their ticket.

Atlanta GM Don Waddell knows that delivering a signed Hossa to a team would allow him more return on this exchangable asset. He aquired Hossa in this manner, after the Senators signed him to his current deal three seasons ago.

He surely would not have aquired him in 2005 without the contract in hand, and Waddell will likely seek a return on Hossa in a similar mode.

The Canadiens are one of the few teams that can fulfill his desire.

In the past week, numerous sources have claimed that such a scenario is being explored with dance partner Bob Gainey of the Canadiens. The rumour gains legs, as the thought process and philosophies fit into both team's GM's methods of operation.

Above that, Gainey has what Waddell needs - the Habs are up to their eyeballs in prospects.

Added to that, the Canadiens have what Hossa likes - a soon to be contending team loaded with European style players that he would have tons of fun with. 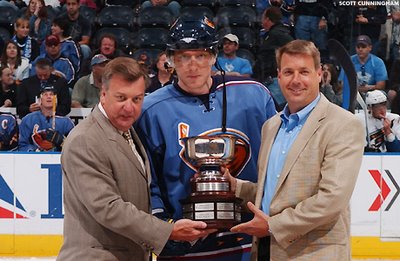 Waddell, it seems, has had many conversations with Hossa on the subject of his future. There is no imminant contract signing with the Thrashers about to be announced. Hossa and agent may, or may not, have suggested that if Waddell were to trade him to his prefered destination at this time, one where he could sign a deal and play for a contender, then it would facilitate maximizing the return Waddell seeks.

Hossa's agent, Rich Winter, is one coy negotiator. The players he represents love him, as he makes GM's squirm and bend to his demands. He has quite a history of being difficult in negotiation, going all the way back to when the Edmonton Oilers stars sought to be paid their worth in the late 1980's.

Winter is no stranger to using the media to set things up in order to maximize the monetary gain of his players. He is one of the rare agents to be so brazingly unscrupulous.

(Think about the name Rich Winter for a moment! The opposite of his name would be Poor Summer. His name is practically a pseudonym for what he represents!)

When Winter denies that the Habs have been given exclusive rights to negotiate with his client Hossa, would you believe it?

One day before, Waddell made the same denial.

Now, it gets curious. Why is Winter backing up the denial of a GM whose team his player is seemingly moving away from?

It begs a question, and an honest answer - not Winter's forte!

Don't kid yourself, the Canadiens are in the Hossa hunt.

Habs fans may be put off by the reputation of Hossa as a playoff slacker, but the perception disguises the the fact that he has put up respectable numbers come playoff time. Other than last season's Atlanta showing, Hossa had been a prime contributor to the Senators playoff goals.

At this time of the NHL season, ramprant rumours fueled by speculation are the norm. You'll hear about everybody going everywhere for everyone for three weeks.

What jumps out of this context are the manager and agent's denials. It is my experience that when you hear about such pre trade contract talk priveledges being given, it is usually during their course of them or immediately after such talks break down.

The media have sniffed it out, and Waddell and Winter are being careful not to snub other teams that will come calling with offers that are better than whatever avenue they are pursuing with the Canadiens. Leverage is everthing at this time.

On Wednesday, the Sun media has this short blurb on it:

"The Habs are a rare exception among NHL teams: They have no interest in free-agent C Peter Forsberg.

Instead, it's believed the Habs have held several discussions with Atlanta GM Don Waddell about W Marian Hossa and have been working on a deal since last summer. A report last night said the Habs have been given permission to talk contract with Hossa, whose agent, Rich Winter, denied that. "Not true," said Winter in an e-mail. "It's just bizarre where this stuff comes from." If the Thrashers do make a deal, the Habs will have to compete with the Bruins, Senators and Wings. The asking price from the Habs is expected to be W Chris Higgins, a prospect and No. 1 pick in 2008."

Notice Winter's choice of the word "bizarrre" to render this information. There's nothing bizarre about it!

The Sun piece followed a La Presse story, courtesy of TFP here, that had Waddell and two other members of the Thashers organization on the Habs trail. It said:

"The Marian Hossa rumors continue to heat up, as Montreal's La Presse is reporting that the Atlanta Thrashers have been scouting the Canadiens. On Sunday, Thrashers GM/head coach Don Waddell took in the Canadiens' home game against the NY Rangers.

Waddell told the Atlanta Journal-Constitution that he was merely on a scouting trip and wasn't specifically there to talk trade with Habs GM Bob Gainey.

In fact, Dobson and Thrashers pro scout Peter Mahovlich were in Montreal Tuesday for their game against the Ottawa Senators.

The paper notes that a Hossa trade to Montreal is not set in stone. Sources tell TFP the two sides are talking, but nothing appears imminent.

According to La Presse, Waddell is covering his bases and weighing his options. If he cannot sign Hossa to an extension before the Feb. 26 trade deadline, he'll have to explore trading him.
If Hossa is traded, the Thrashers would apparently want a young NHL ready player and a first round pick, however the team might be interested in one of Montreal's top defensive prospects, a source said."

Now as coach of the Thrashers, it is extremely odd that Waddell would pack a suitcase for this. Even odder is the fact that his assistant made the trip. Normally assistants to GM's are the money men - as Julien Brisebois is in Bob Gainey's case - and they specialize in contract details rather than player specifics. That Dobson is also Atlanta's director of player personel, and that he was accompanied by a scout, makes all this sound even more serious.