Share All sharing options for: Habs Gain Desperate Point, Close In On Ottawa 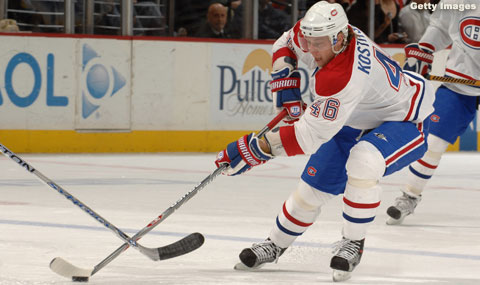 The Canadiens showed only flashes of the prowess they displayed in the last three games, but still managed to put enough desperation together in the late stages of the game and salvage a precious overtime loss point.

The story of this game however, was an unleashed Alexander Ovechkin who scored four goals - one in each of four periods - to defeat the Habs singlehandedly.

It's been put this way before: Shut Ovechkin down and you have beaten the Capitals.

Of course, the inverse is: Fail to do so, and he'll kill you!

It takes a team to shut him up, and Montreal seemed to forget that it wasn't as easy as it looked when they accomplished the trick on Tuesday night.

But enough about Ovechkin, as Alex Kovalev said after the last game, "We have good players on this team. Talk about them!"

Okay Alex, but first let's note that the loss moved the Canadiens closer to first place in the East, as they gained a precious point on Ottawa, who lost to Boston. Overall the Canadiens are tied for third in the NHL. The Habs, Dallas, and San Jose all have 63 points, but the Stars have an extra win in regulation while the Sharks have played three more games.

If anyone had said back in October that Montreal would be 5 points back of Ottawa, and fourth overall on January 31, you would have shouted, "I'll take that!", or "Buddy, it's time to clean out the pipe!" 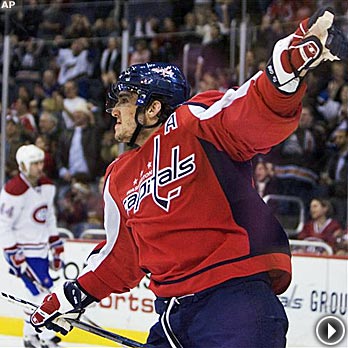 It would have been much sweeter had the Habs continued playing as they had on Tuesday, but the Capitals, with Ovechkin, are likely a different prey at home where they have the last change and can manipulate Alexander the GR8 against the Habs countering lines with more ease.

Give the Canadiens players credit for not mailing this one in. They rallied from 3-0 and 4-2 deficits to tie the game late and gain those points that are so important come April.

Certain Habs that shall remain nameless because I'm in a good mood had a brutal first half in this game. They were rescued by the KIddie Corps - the line of Sergei Kostitsyn, Maxim Lapierre, and tonight's hero, Guillaume Latendresse. The Canadiens Kid Line were the team's best line tonight, accounting for three of four goals.

With only a few games under their belt, the trio played as an experienced line should. They brought a frothing enthusiam to a game lacking in it, and each player seems to understand their roles to precision.

It was quite surprising to watch them click in the latter stages of the game. All three players throw hits when the opportunities present themselves - regardless of the opposing players size in the case of Lapierre and Kostitsyn.

Lapierre is the two way conscience of the line, dishing it out, making the first pass, and keeping an eye out for the turnovers poised to retreat. Kostitsyn can play with the puck an extra few seconds, in a manner similar to what Kovalev has mastered, in order to give his linemates time to be positioned. His passes are crisp and hardly telegraphed.

Latendresse's job is the slot and charging it. He's muffed and milliganed on countless chances of late, but is doing enough things right to earn those chances. Consistency of effort paid off in his case tonight. The big winger, often much maligned, is never given enough due credit for what he is and brings to the team. His combination of size, strength and shot are qualities which 29 other teams wished they had in a 20 year old. Those knocking him have all the foresight of a lemming. For his age, Latendresse is immensely mature between the ears. What time, dedication and experience will do for him as a player is convert him into a perenial 35 to 40 goals scorer whose forte is the big game.

Sergei Kostitsyn, drafted in the same year as Latendresse and Carey Price, might turn out to be the best player of the 2005 draft class. Every game I watch him play, the kid shows me not only something new in his game, but something unexpected. Sergei can shoot from any angle, pass in traffic, hit anyone, backcheck with speed, play the PP point, and be a general thorn in the derriere to opponants. He is doggedly determined and full of heart. Tonight he found Latendresse in the slot with an odd angled pass while a Caps defender was bearing down on him.

Just prior to Guillaume's second goal, Kostitsyn did some nifty corner work, took a shot himself that went just wide, and helped keep the puck in his zone by being relentless along the boards and in the corners.

Despite the efforts of the Kid Line, the Habs slow start cost them a point tonight. File it under the "We can't win 'em all" efforts.

Other than the gelling of the Kid Line, the big positive to take is the one point gained on the Senators.

I'm starting to believe that if trends continue, such as the current one wherein the Canadiens keep earning 13 to 15 points in every ten game slice from now until the season's end, we can catch the Senators.

Ottawa, in case you did not know, has won only 17 of 35 games since November 15, when they had an earth shattering record of 15-2. Since then, they have had to deal with injuries to star players (Heatley, Volchenkov, Spezza, Alfredsson), suspect goaltending (Gerber and Emery), star player distractions (Emery again) and contract concerns (Redden). There are triple the trade scenarios floating through their media, and the pressure of a team such as the Habs, whose fandom overtakes their backyard, can only weigh heavily on the psyche of the team.

The Senators have nowhere near the depth Montreal has. Down the stretch the Canadiens can use assets outside the nightly lineup to improve the team via a trade they can't refuse. Ottawa will be gambling by exchanging pieces of their current puzzle.

And it might all be decided by that one point the Habs gained tonight.

A pair of side notes for fans of stats and all things trivial:

Tomas Plekanec had two assists tonight, bringing total to 30. At this rate, Plekanec would finish with 48 assists, which wouls top his points total from last season.

The Kostitsyn's became the first Canadiens brothers to score in the same game since Frank and Pete Mahovlich did the trick for the Habs in the 1974 playoffs.