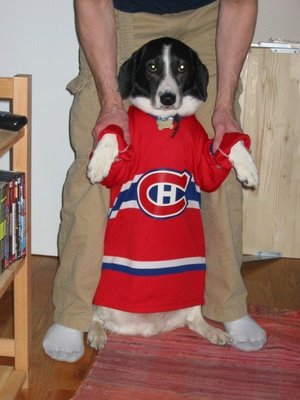 Retro Mikey, as he is known in Habs Inside/Out circles, is organizing a Habs Fans Summit for Friday April 11 in Hamilton, where the Bulldogs will be facing the Toronto Marlies that evening.

It's a great opportunity for some of the millions of Habs fans on Maple Leafs turf, and others, to get out get together with similarly intelligent and good looking people who share in the taste for quality hockey wherever it is played.

Mikey has made contact with the Bulldogs operations and is about to secure a number of seats depending upon the demand. Things are just getting started, and I have offered the services of this site as an information central, of sorts.

Several people have already gotten on board for the idea, and suggestions of restaurants and clubs are being tossed around for before and after game activities. Motels are being looked into as well.
Ian Cobb and Chuck, from the first Habs Fans Summit are said to be going, and soon others will follow as they are curiously following the unravelling of the details.

Today at the Habs Inside Out site that launched and pulled off the very successful first Habs Inside/Out Fan Summit I in October, Gazette journalist Dave Stubbs had this to add:

"This is terrific news. I spoke this week with Dave Robinson, a front office guy with the Bulldogs, who contacted me to discuss the idea. He has ambitious plans for the event. I told him of the success of the first (annual?) Habs Inside/Out Fan Summit, and he's tapping into the expertise of our friend Yeats and others from the Montreal organizing committee to see how it was pulled together.

Who knows who might wander down to Steeltown from Montreal for the 'Dogs summit?
Depends on where the Canadiens might be, as that will be the first weekend of the NHL playoffs, but anything is possible at this point."

Retro Mikey e-mailed me earlier today asking for some help with the enormous undertaking that such an event incurs. If there is anyone out there who resides in the Hamilton region and is interested in attending the event and can help Mike with their organizational skills, you can e-mail him at Canadiens.

Mikey added in his e-mail to me, that April 11th is Customer Appreciation Night in Hamilton and that his contact within the Bulldogs organization has promised good seats. While nothing is yet carved in stone, Mike's contact has discussed the possibility that there could be meet and greets with players and Bulldogs brass. He has also told Mikey that he has spoken with Dave Stubbs and with Rejean Houle, who is in charge of the Montreal Canadiens Oldtimers Alumni.

There could be something special cooking for this event, and I'll be doing my utmost to keep everything, and everyone, posted on the latest news here.

Anyone with inquiries or anything to add to this growing event can also e-mail me at realitycheck-time@hotmail.com, which is this site's address. I'll pass along whatever news there is to readers on a daily basis.

I will also be placing a permanent sidebar link at this site, just beneath the Google ad in the top right hand corner for easy access to new updated information. Check back daily to keep on top of things. Shortly after, the comments sections will be open for participants who wish to communicate with each other. I will disabling the comment moderator I have set up so that people can converse without delay.

That's all I have for now. Keep checking back for updates.

If anyone is not familiar with what the Habs Inside/Out Fans Summit is all about, these three posts are a good place to start.

Read all about it and join the party. It will make the Drive For 25 all the more sweet.