Gainey In A No Win Situation

Share All sharing options for: Gainey In A No Win Situation 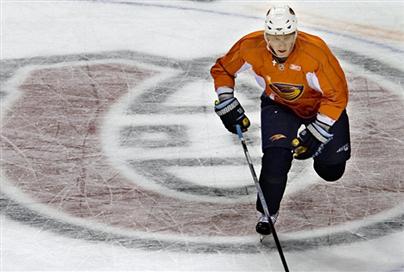 The harsh reality of today's 3 P.M. deadline for Habs GM Bob Gainey, is that regardless of what he does, he will be unfairly maligned for it.

No matter what the evolution of several unfolding scenario's will be, unless there is a Stanley Cup attached to it, what he does or does not do today will be described as a failure.

And that outlook could start as early as 3:05 P.M. Tuesday.

Gainey could do one of three things today. He could decide to stand pat in light of the rising cost of the players he seeks. He could succumb to the pressure and foolishness of the day, not wanting to be outbid for who he truly has an eye on, and overpay dearly for 2 months worth of rent a player disinterest. Lastly, he could choose to unload a potential free agent as he did last season for futures and get crucified for it in the short term should the Habs fail to have a season's end that could be termed a success.

Watching the trickle of signings and trades in the past hours leading up to February 26, I get the sense that several GM's are about to get squeezed in the same vice of helplessness.

Three key happenings have helped set what is, or isn't, about to go down on Tuesday.

First, Mats Sundin and other valuable trade commodities in blue and white, have refused to waive their no trade clause. This removes possibly three or four potential deals with teams who were interested in these players.

Second, Calgary GM Darryl Sutter seems quite serious about hanging on Alex Tanguay until summer. The bidders for this player will be turning their focus elsewhere.

Third, Peter Forsberg has signed with the Avalanche, and Dan Boyle with the Lightning, who then traded Vaclav Prospal to the Flyers. The moves cut down potential scenarios that other teams might have envisioned.

How all this affects the Canadiens and Gainey's situation is that it raises the price of players on the market by supply and demand.

The asking price for Gainey's targetted player of choice, Marian Hossa, will now have risen because there are more teams bidding. What Thrashers GM Don Waddell was asking yesterday, will have increased by today.

Gainey, a sensible man amongst a league of gambling fools, might just choose to suffer the consequences of sitting still once again.

I'm prepared for such an eventuality - I'm almost expecting it.

Should he do so, it's not the worst landscape in the world. I'll comfort myself with the thought that Gainey has at least not taken his stare off he big picture.

Should the bidding get ridiculous, and it will, much will depend on how the domino's fall. The big fish of the day other than Hossa are Brad Richards, Olli Jokinen, Brian Campbell, Patrick Marleau, and Glen Murray. When they move will be as important as where they move to.

It is said that the most serious threat to the Habs landing Hossa is his former employers, the Ottawa Senators, who are rumoured to be offering two or more roster players, as they have little to offer on the farm. The Senators, if you can appreciate this, are even more desperate to make a move for the Holy Grail than the Canadiens are. Should the stakes rise, my feeling is that Ottawa will either fall out of the Hossa contention early, or make a ridiculous unrefusable offer that compromises their future depth somewhat.

If Montreal were to part with Michael Ryder, Ryan O`Byrne, Mikhail Grabovski, David Fischer, and Alexei Emelin for Hossa, I think every Habs fan would shudder.

Especially if Gainey fails to sign Hossa in the summer.

Would he even do such a deal if Hossa came signed?

Names of other Canadiens such as Mark Streit and Chris Higgins (doubtful) have been also mentioned as possibly heading out of town on such a deal, as well as prospects Matt Carle, Pavel Valentenko, Jaroslav Halak (doubtful as well seeing Huet is a free agent soon) and Matt D' Agnostini. Draft choices could also come into play, but seeing the Canadiens will not be picking in the top 10 that pick would not be highly valued or a deal breaker in any way.

In the end, Gainey might just throw everyone a curveball, and send one of Ryder, Streit or Huet to some team on the playoff bubble and fetch a first round pick, while lining himself up for the firing squad that is the Montreal media.

Such a play would be doubtfull as Gainey as unabashedly stated his mission this time out.

When the day is done, let's hope he has neither settled for something lesser than his target, or compromised the future depth of the team to win an additional playoff round.