Share All sharing options for: For Sale: Never Used Pair Of Red, White And Blue Gloves

It's been a hectic two weeks leading up tp yesterday's 3 PM deadline, and in this morning after the big disappointment - and an oustanding Canadiens win - I'm still a little peeved at Bob Gainey.

Not for trying to aquire a premier forward in Marian Hossa.

Not for failing to land Hossa.

I'm peeved, slightly less this morning, for Gainey getting us all swept up in it.

Hossa sightings at airports, phantom gloves on order, and rumours galore. You'd think it was playoff time already. The absurdity that everyone including myself were swooped up in reminded me of when Patrick Roy had his appendix removed between playoff games, and someone put a bid on it!

Montreal gets like that, and Gainey should have seen it coming. Hockey fever at it's most fervent.

I was surprised as many were when he came out and spoke his intentions out loud. For a man who usually is low key about his goals, the admission was uplfting and stunning. In the aftermath, declaring he was out to hit a home run only set up disappointment.

When Gainey made the quote, I considered the effect on the Montreal media. It had the same effect on me. I got swept up in a way of hope.

I recall thinking, "Bob, what are you saying! Come to your senses!" 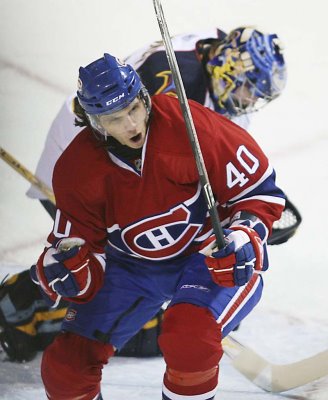 Bob came to his senses at 2:53 PM yesterday, apparently. When dance partner Don Waddell's asking price became a touch too lofty for Gainey to assume, the wise man backed down.

What happened was Waddell did as any GM worth his salt would - he upped the ante until the last minute. When the Thrashers GM asked Gainey for more, the good Bob stood his ground. The Penguins had offered the four bodies they ended up sending and the Canadiens balked at the offer of Mikhail Grabovski, Matt D' Agnostini, Mark Streit, and Ryan O'Byrne.

You can decide which offer you'd choose, but Waddell went with the two NHL regulars offered by Pittsburgh, a first round pick in 2008, and the disappointing Angelo Esposito that the Pens chose last summer.

Gainey could not see the Habs as being improved, had they surrendered three assets from their starting lineup, and good for him!

This team did not look too shabby on the ice last night, but the playoffs are a whole other test.
What confounded me from the get go, was that the Canadiens have plently of offfense. After last night's game, they have scored 201 goals. Detroit have 203 with one more game played. Ottawa has 210. 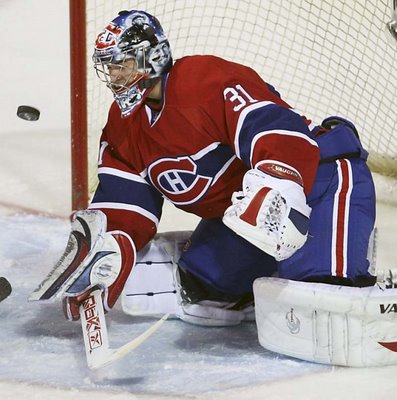 Offense is not the problem, defense is more of a concern.

Markov, Komisarek, and Hamrlik rate a great top three, though none will be confused for Pronger, Niedermayer or Lidstrom.

Francis Bouillon and Josh Gorges have surprised of late - in certain games. Ryan O'Byrne is coming along as well as hoped.

There's Mark Streit to sub on the PP point and fill in when penalties get hairy and rotations go out of whack, Mathieu Dandeneault in emergencies, and Patrice Brisebois when...when...when hell starts to freeze.

It would have been good to see Bob add, say, Adam Foote or another top 4 d-man to the corps.

Instead, Gainey delivered the curve I so greatly feared when writing about this two days ago.

Certainly many weren't prepared to see Cristobal Huet dealt, especially at a time when there was little market for goalies. The returning second round pick does not make Gainey look genial today, but he may be looking at things differently than most.

Standing to lose Huet to free agency this coming summer, and with Jaroslav Halak once again standing on his head in Hamilton, a choice needed to be made. As this is a young team, perhaps Gainey wants his goaltenders to peak at the same time the core of the team reaches its apex.

That is not now. It might just be next year. It will surely be the year after, in many estimations.
In order to have the goaltending be where it needs to then, the process of them being front and center, taking the bullets, must begin now. With Huet in the picture, this would not have happened.

Yesterday cemented the notion of Carey Price as the man of the moment, over simply being constantly regarded as the goalie of the future. Gainey's decision makes clear the future begins now.

It was good then that he sacrificed none of it yesterday.

Gainey's final piece, his home run signing, Hossa even, can come this summer.

He'll appear a great deal wiser when it happens - as long as he doesn't tell the world exactly what his intents are with two weeks notice.