Where The Canadiens Are Headed

Share All sharing options for: Where The Canadiens Are Headed 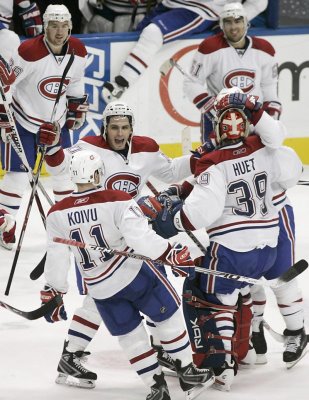 I woke up this morning and looked at the NHL's overall standings - something I do not do daily. Maybe twice a week, after a Canadiens win, I look at pure statistical numbers to assess where the Habs are at in regards to the league.

How they have played the night before is but one thing. Where they are placed in respect to 29 other teams, is in fact reality for a short time. Of course a pair of losses can knock them out of the top 10 quickly. Keep in mind that the placings below are but a temporary snapshot. Things can change fast.

So it is with that mindset that I head to NHL.com and click the "league" icon to see where the Canadiens are in the grand scheme, and it looks like this.

As it stands now, Montreal is in a three way tie for fifth overall in the NHL, which is actually totally mindboggling for such a young team filled with burgeoning yet unproven talents.

They have the league's third best goals per game ratio, the NHL's best ranked powerplay, and surely because of that, the fourth best +/- when forgiving man advantage stats, with an overall + 13.

The Canadiens also own the league's second best road record.

Other than the impressive PP, all these standings and rankings could change in a Chez Paris minute. Considering that the Canadiens are a team in full growth, these telling stats should improve through leaps and bounds rather than regress.

While the Habs have no individuual stats leaders of great reckoning, many players on the team are enjoying very good seasons. It is interesting to note that Montreal does have six players in double digits for goals in a very spread out attack. Dallas leads with 7, Detroit has 6, and Ottawa have five.

At the beginning of the season, I had the Habs pegged for a playoff spot based primarily on instinct and understanding. They are a young team that is gaining confidence rapidly, and having missed the post season last year by a mere win, the same mistakes would translate into lessons learned and post season play in 2008. In my highest esteem, I saw them sixth in the East, a few notches below where they currently are now.

With all this, I figured it is just about time to sneak a peek at what games are left for Montreal as they persue that playoff goal.

I must admit that in my thinking the schedule looks favorable. Breaking it down quickly, here's what's ahead:

Of the 36 remaining games, 21 are at home and 15 are on the road. Most teams would kill for thsi scenario, but the Habs home record is not outstanding by any stretch. It will get better, but it needs to fast.

Fourteen of those game are against Northeast Division rival, including the last eight games of the schedule. Eight are on home ice and six are on the road.

They only play games on back to back nights four more times, and the first three occurrances are in the month of February in a fifteen day span. They are at home against the Islanders and Rangers on the 2nd and 3rd (2 PM), against Tampa and Florida after two days rest on the 12th and 13th, and the a home and away against Philadelphia on the 16th and 17th. On March 8 and 9, they play the Kings and Ducks. Again, most teams would be thrilled with this setting.

The Canadiens have but two extended road swings lasting more than two games. The first includes the aforementioned February Florida state swing, that begins with a road game in Ottawa on the 9th. The other is a more grueling western trip that hits San Jose March 3, Phoenix March 6, Los Angeles March 8, and Anaheim March 9.

The good news, if they get their home ice act together, is that the Canadiens have three four game homestands. The first is in the opening week of February and sees the Islanders, Rangers, Senators, and Leafs in order, and in the final week of the month, the Rangers, Penguins, Blue Jackets, and Thrashers. In the middle week of March come the Devils, Senators, Islanders, and Blues.

Of the current 10 top teams, Montreal faces five of them in the remaining games. They play three at home and two on the road against Ottawa, two at home to New Jersey and one on the Devil's ice, two at home against the Penguins, and trip to San Jose and Anaheim.

Sixteen of the 36 games are against teams currently outside the playoff picture, if that means anything this early.

Last season, Montreal missed the post season by a win, finishing with a 42-34-6 record for 90 points. Currently at 24-14-8 for 56 points, the Habs need 34 points to equal the same total. In my estimation, they could need to finish with 95 points to secure a playoff spot, which is 39 points more than they have now. They could achieve this by being as average as a 16-14-7 record.

Starting with tonight's game at home against the Penguins, the Habs next ten game slice is appealing. In order, they play:

The Canadiens have earned 16 points out of a possible 20 in their last ten games. In order to reach the playoffs, each ten game span requires them to earn 12 to 13 points. In these next ten games, I see them getting 12 points if they can take the Sens into OT at least once. This is one tough time in the schedule, as the Devils, Rangers, Capitals, and Senators are no easy foes. If the Habs can manage the 12 points I think they can get ( 5-3-2 ) then expectations will have been met. Should they exceed expectation then it just makes what comes after even more accomplishable.

Now these are cautious scenarios at best. If the Habs can win 6 of 10 - hardly a world beating feat - in the next three ten game slices and take two wins in their final six games, while gaining a mere four points in overtime - they will hit the 100 point plateau.

They can do it!