Share All sharing options for: What's Right For Price 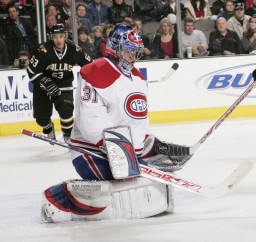 (Robert L Note - As a blogger I often find my pieces linked at other sites by examining my site meter's traffic history. I like to understand where my readers are coming from and in which manner they are finding my site. Two of the more prominant places that my pieces are linked to are at the Lions In Winter and the All Habs blogs, and then there are a variety of Habs Fan message boards than bring readers here as well. Occasionally these blogs and boards reference my pieces and add commentary that are very interesting for me to read. Today I hit upon a great piece at Lions In Winter that gave me alot to think about in regards to a recent piece about Carey Price, and halfway through it I felt compelled to share the other side of the coin with readers who come here. It is a piece I'd wish I'd written. Check it out and let them know what you think. I'm only posting selected exerpts here, and adding my thoughts. For the complete post, click their links, as it is well worth it. )

Tobalev and Topham are the pseudonyms of the Lions In Winter scribes. Both writers are insightful analysts on all things Habs, and often see things beyond the surface of how the mainstream media portrays the goings on of the team. In short, what they write makes one think.

In a piece concerning the demotion of Carey Price to Hamilton, Tobalev uses history as a valid case for not overlooking the merits of Jaroslav Halak, who seems lost in the shuffle. Tobalev warms that one should not overestimate Price or underestimate Halak, and makes a great case for his opinion with very relevant and recent scenarios involving other Canadiens prospects. 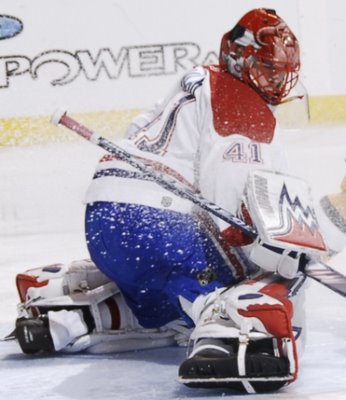 "While Carey Price's name is much more fun to use in headlines and such, I just cannot understand why every columnist, analyst and blogger I have read has refused to look at the recent changes from the other perspective – that is: "Halak recalled". I could say the same about Locke/Chipchura, but the overwhelming focus on Price from the blogosphere has led me to focus on that story."

Tobalev then references and links to a handfull of quotes, from former Hab Benoit Brunet to yours truly, to note how few of us fans have considered Halak in the equation.

"Many articles on this topic mention Halak once or twice. Panger concedes Price may have been demoted to make room for Halak, but only so he can be traded (a possibility of course). Brunet and Robert L don't mention Jaroslav at all! If I hadn't already used the title, I might have called this piece: "Halak Of Respect."

In a very good career so far Carey Price's crowning achievements were afforded to him by virtue of a) being Canadian and getting to play on the best junior team in the world and b) Jaroslav Halak playing so well he was called up to the Canadiens and then to the Slovakian National team.

Is it conceivable then, that Halak could turn out to be better than Price?"

Tobalev gets even more pointed and zooms in with historical examples why we may have to temper our opinions on Price and reconsider Halak as a puckstopper.

"Pundits and analysts around the team lauded the first round selection of a defender at the time, and continued to tout the prospect as he progressed impressively through the minors. The other player quietly made his way over to North America, played well in the minors and earned a call up one day to the NHL.

Andrei Markov never really looked back, overcoming his small stature, language barrier and low draft position to blossom into the best defenseman on the team and the Eastern Conference (some young superstars would say the league).Ron Hainsey never stuck with the Habs, was left unprotected and while doing an admirable job at growing into a very good offensive defenseman, would never be confused with the best in the league".

After reading this, I must honestly admit that Tobalev's opinions will simmer with me for some time before making proclamation for Price again.