Share All sharing options for: Carey Price: Handle With Care 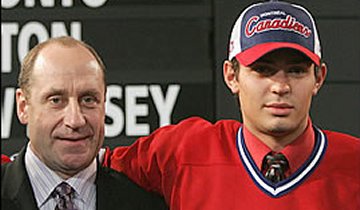 I hope that the Canadiens know what's on the line when playing musical chairs with a gem the likes of Carey Price.

The 20 year old goalie isn't the first athlete his age to live through this experience. Many players have returned from the minors better prepared for the rigors of the NHL after suffering through a fate similar to what Price is about to experience.

Price is so important to the future of the organisation that they must take the time to fully explain what is behind the decision and why it is felt that it is best for him at this time. During his stint in Hamilton, he will need to be spoken to often, in order to check on his morale and his state of mind.

It will not be Bulldogs coach Don Lever's agenda to take care of Price. The goalie's ears will not be atuned to Lever, with whom he will never cross paths again once he is recalled to Montreal.

Roland Melanson will stay in contact with his student. Bob Gainey will occasionally call to get the news. Everyone one directly involved will be on top of things, reminding Price that he is still the spinal cord of the team's future hopes.

Over the next 15 years, the Canadiens will need Price much more than the goalie will need them. Athletes of his calibre will always find open arms when it comes to finding teams interesting in knowing whether he's curious about the grass being greener on the other side.

All kinds of stories are circulating about Price, suggesting he was acting too self assured, was lacking concentration on his work ethic, seemed at times nonchalant, etc.

I have no idea whether these rumblings are true, and I have even less insight into whether they are behind his sojourn to Hamilton. Price is not the first player the Canadiens attempt to crack or correct in this manner.

If the decision is in fact a punitive one, he must accept it. If the reason behind it is merely to give him more playing time, then it is just as well. By contrast, if the move has been done in order to show faith towards Jaroslav Halak and incite him to have some patience in the teams plans for him, then it is neither logical nor well thought out.

Irregardless, Price has everything to gain by rolling up his sleeves and making the most of it, as it is unthinkable that in the event of an injury to Cristobal Huet, than the Habs choose to play out the stretch with anyone other than Price in goal.