One Thing Missing From Kostitsyn's Happiness

Share All sharing options for: One Thing Missing From Kostitsyn's Happiness 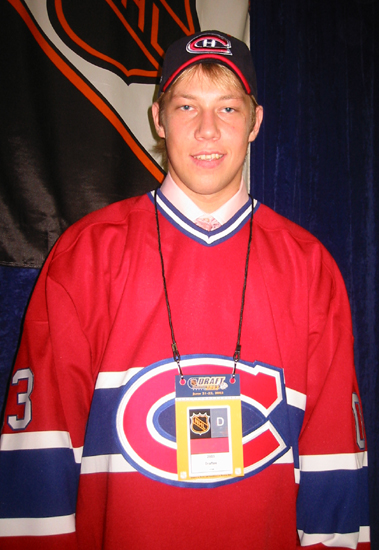 (Robert L Note: This article translation, I believe comes from Le Journal de Montreal - I'm not sure! In all the computer fiascos I've dealt with in the last week as I changed computers, I unfortunately lost the backlink to this one. The better news is that I've recovered all my files from the previous computer, and I should be back posting the historical content as well as other pieces that were in the works before long. This new computer is bitching fast compared the old horse I had been using. Believe it or not, it was taking me hours to simply post pieces before the switch. With speed on my side now, everything will be much swifter and readers should soon benefit from this with more content here. I'm as happy for you all as I am for myself. )

Andrei Kostitsyn has finally arrived at his destination. In his fourth year in North America, the Belarussian winger has made his way in the NHL.

Kostitsyn is answering to the description of Canadiens director of player recruitment Trevor Timmins when he made him the 10th pick overall in 2003 at the entry draft in Nashville. An above average skater who protects the puck well and possesses a wicked wrist shot.

Including yesterday's game, Kostitsyn has points in 14 of his last 17 games - for 8 goals and nine assists for a total of 17 points.

A point per game average - what a treat!

"I'm playing more, I'm comfortable, and I enjoy the players I am playing with", he stated in rough English after practice last week.

Kostitsyn is in his element alongside Tomas Plekanec and Alex Kovalev, for whom he and his younger brother Sergei Kostitsyn have great admiration for. One just needs to witness how the brothers pay attention to Kovalev's handling of journalists to see just how captivated both are with their "big Brother".

"I knew who he was before coming to play here, even though there are no NHL games on TV in Belarus", Kostitsyn added. "He was with Pittsburgh then"

Kovalev took him under his wing this season and "He speaks to me all the time, telling me what I am doing well".

"And surely what you are not doing well, knowing Kovalev", added the author.
Kostitsyn's face cracked a rare smile, "Yes", he timidly admitted, without any doubt. 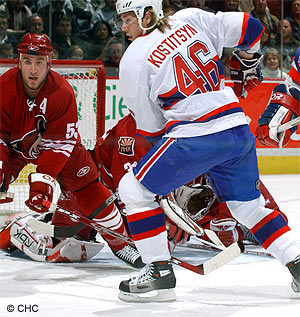 Kostitsyn is also high on his centreman Tomas Plekanec, who he terms "an excellent playmaker who is vastly underrated".
So true!

Now that Kostitsyn has adapted to the NHL game and North American lifestyles, it only leaves him with needing more stability on the homefront. His wife, to whom he has been married with for two years and his ten month old girl spend most of the year back in Belarus.

Kostitsyn spends a great amount of time with a cell pressed against his ear, from the Bell Centre doors down to the hotel hallways.

"My wife finds the time long here when I'm not home", he tells. "She speaks little English and has no one to talk to. She's preferres to remain in Belarus and come into Montreal on ocasion." It can't be easy for a young couple.

"It's very difficult", he admits. "I'm watching my daughter grow up through pictures, but next year we will all make Montreal our home."

In the meantime, Kostitsyn spends time with his brother Sergei.

"We're together all day long even though we don't live together. We go our separate ways at night."