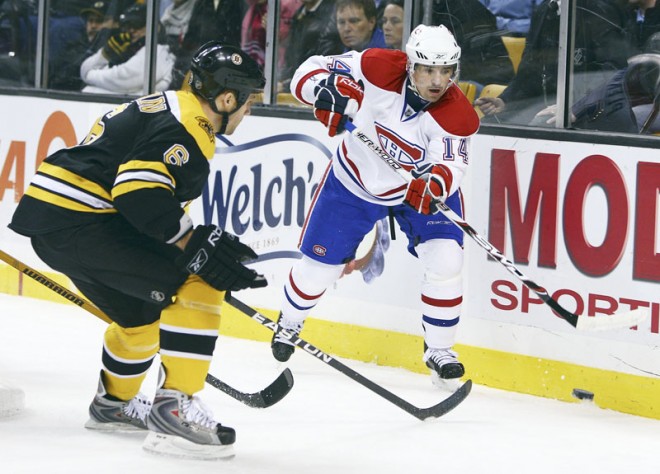 I recall watching Guy Carbonneau in my late teens as a member of the QMJHL Chicoutimi Sagueneens as he developed into an offensive powerhouse with an astute sense of anticipation. That Carbonneau had excellent skills for reading plays about to develop were apparent to anyone who had the opportunity to watch him play often enough.

In those days of the late 1970's, it was awful rare that a player with such developed capabilities was left in junior hockey until age 20, but the Habs were busy winning 4 straight cups and Carbonneau remained a junior. He tore up the Q in his final year, notching 72 goals and 110 assists.

The Canadiens saw in him a defensive specialist!

After a season of grooming for the role with the Nova Scotia Voyageurs, Carbonneau made the Canadiens and never looked back. As a winner of Selke Trophies and Stanley Cups, he proved the Habs were right in their assesment of him.

I always wondered what would have happened had they turned him loose in the NHL, offering him the centerman spot on either of the top two lines? 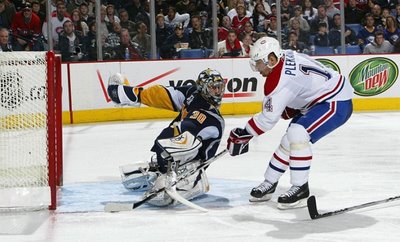 When Klado native Tomas Plekanec came onto the Canadiens scene three seasons back, I saw that finely tuned defensive forward emerging once again. His build, size, and skating stance were similar to Carbonneau, and they shared many of the same sensibilities. Best of all, they read the game with the same studious anticipation.

As he slowly develped into a full time player, Plekanec made many see that there was plenty of potential upside, regardless of which direction his game would be pointed in. In him, some saw a third line defensive specialist, while others saw a forward who might one day fit as high as a second line center on the team's depth chart.

Coming out of training camp in 2006, the Canadiens traded Mike Ribeiro and the job of number two pivot was handed to Plekanec - perhaps before he was not prepared to assume it.

Adept as he was a reading a play, nothing could quite prepare him for a season alongside a gutless Sergei Samsonov and a lost and unfocused Alex Kovalev. With these linemates, Plekanec initially looked brutal.

It is one thing for a consciencious center to poise himself when the opposition has the puck, it's an altogether different understanding to learn a role when linemates consistantly kill plays before a center is offered the chance to add his dimension to their game.

Midway throught the season, Plekanec wrestled his game an identity away from Kovalev's, by doing more of what he wished to with the puck. Perhaps Plekanec was initially timid in surrendering the disk to the veteran linemate.

In time he learned the pivot's role required Kovalev to follow his lead and he began to thrive while people took notice of his rounded game.

By the season's end, Plekanec had scored 20 goals and 27 assists, and what whet appetite's most was that he had earned most of those points after Christmas. 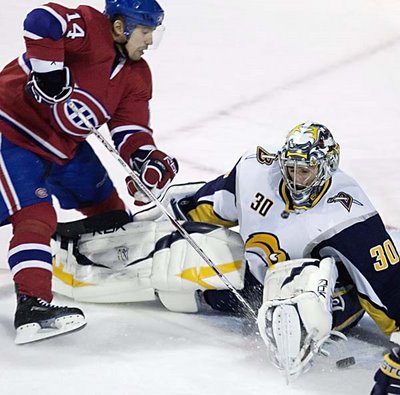 One could only wonder how Plekanec would produce over the course of the season at that pace and without an anchored Kovalev to weigh down the pace.

Towards the end stretch of the 2006-07 season, Plekanec was newly paired with Chris Higgins and the line seemed to throw sparks once Andrei Kostitsyn was called up from Hamilton. Enough so, that it was one line that fans hoped would not be broken up in the new season.

Fans did not quite get what they had hoped for, but they did get what the team needed best - a hot first line!

While the unlikely and surprising rebirth of Kovalev has played a large role in the line's comeupance, it is how Plekanec uses both side threats that has made the thing swing.

With shifty and speedy wingers at his disposal, Plekanec reads how defenseman read his wingers on a rush and reacts accordingly. As both Kovalev and Kostitsyn have the ability to either zing one from far or beat defenders one on one, it is becoming Plekanec's pinic to sort out the developing plays. As his wingers are covered, Plekanec has the option of heading hard to the net should no cover be in sight, or rolling back quickly on the play as it is about to turnover.

Playing against teams with lines unworthy of shutting the trio down might account for how they have registered multi point games this season.

The progression in Plekanec's game this season may account for the fact that he has almost reached last season's totals. With 37 games left, he has 16 goals and 24 assists. If he maintains the recent pace, he could well hit 80 points - the first time in a near decade a Habs centerman had done so.

What is curious, is where exactly lies Plekanec's upside? 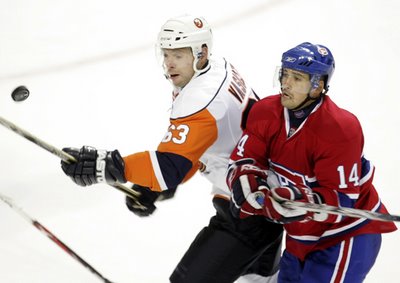 Considering that players who become famaliar with one another on a line usually tend to gel better with experience, some might be ready to scope Plekanec in the 90 to 95 point range once his game peaks.

Thinking back to Carbonneau - now his coach - it is reasonable to assume that the teacher who has been there, can assist the student on his way, into having as well a rounded game as the former Selke winner possessed.

Seeing the student score the shorthanded eventual game winner last night against the Islanders - a game dominated and controlled by his line - leads to believing that Plekanec's upside may be greater than first presumed.