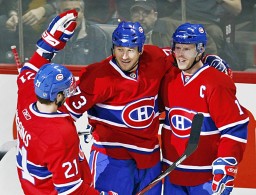 Talk about rebounding from a shutout loss!

On the day when mercy finally came John Ferguson Jr.'s way, the Canadiens showed none to a Bruins team that has been owned by the Habs for some time now.

How humiliated were the Bruins by our Habs in this one?

It can be summed up in a simple clip from the second period, when a tied up Alex Kovalev dropped a glove while corralling a puck behind the net. With the puck dangling at the end of a one armed stick, Kovalev played the puck back to himself off the backboard, spun and then recovered both the glove and the puck at his feet, before spinning back through traffic again to emerge in front of the net, puck in hand and untouched.

It will be the non - goal highlight of the week!

I've said it before and I'll repeat it - the Bruins play stupid hockey against the Canadiens. They bring a stupid game plan that they do not deviate from with increased losses. They think they can push around the Canadiens and lure them into indiscipline and capitalize on it as if they were the 1972 Bruins.

Or maybe Claude Julien thinks he is still coaching the Devils and the Habs team he is facing is the one he was fired from? 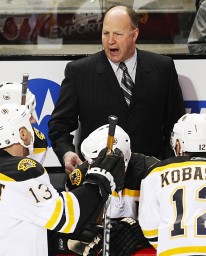 What worked for Julien last year in Jersey evidently is not working now!

It's a dumb game plan made even more moronic by starting Alex Auld in net rather than the usually sturdy Tim Thomas. What was Julien thinking? Was he resting Thomas for the All-Star Game?

Zdeno Chara might strike fear into the rest of the NHL, but against the Habs he becomes one clumsy dolt. The Canadiens are used to building their game around keeping him off base and prepare the lines that face him accordingly. It worked for them when Chara was with Ottawa, and they do not steer clear from him as a Bruin. The Bruins do not get this.

As long as the Bruins approach the Canadiens the same way, they will not win. They'd better use the Devils angle and try boring the Habs to death before pouncing on them.

But enough about the Bruins and how they baked themselves for a Habs dessert. How about what the Habs did well it this game?

Boston arrived in Montreal on Sunday in order to be well rested and prepared for the game. Montreal scored 14 seconds in, and added another goal 2:58 later.

Boston gave the Canadiens powerplay only one opportunity to work with in the first period. The Habs responded with four even strength goals.

Boston players did their utmost to get under Mike Komisarek's skin. Komisarek took no penalties, had a goal and an assist and finished the night +3.

Boston keyed on the trio of Kovalev - Plekanec - Kostitsyn. The Habs had goals from all four lines, and the trio in question had a 5 point night.

Montreal scored six even strength goals. So much for the team that couldn't score five on five.
Andrei Markov was +4 on the night.

Mark Streit had three assists, bringing his total to 25, just one behind team leaders Koivu and Plekanec. He makes about $600,000 a year!

Guillaume Latendresse could have scored his 20th goal tonight. Yes I know he has only twelve goals so far, but he has muffed and milliganed on a good dozen chances in the last few games. The good news is that he is getting more chances than ever before by doing a bunch of things right -like charging the net bulldozer style. Everything will come unblocked for him soon.
Did I mention all four lines scored tonight?

Michael Ryder, brought back to the top line, justified coach Carbonneau's somewhat controversial decision by scoring his eighth goal of the year. In the 11 games since being sat out, Ryder has 4 goals, and that ratio translates into a 30 goal scorers pace. This, and the manner in which he has scored his last two, suggest his nose for the net and his quickness have returned. Let's not give up on this Newfie so soon! 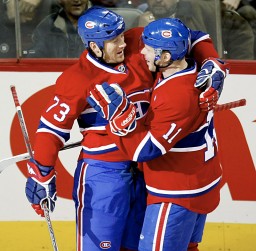 That goon the Canadiens so badly need, wasn't needed tonight. Komisarek had ample opportunity to trashcan a few poor Bruin's faces, but opted to chose democracy in light of the score. Tom Kostopuolos came to the defense of a fouled teammate and Sergei Kostitsyn - surprise, surprise, defended himself adequately well after being cross checked by Chara, and pounced upon by Chuck Kobasew. A Russian with balls - how could we be so lucky, I ask you Don Cherry?

Good news - bad news! The Canadiens are but 6 points behind the injury riddled Senators. The Devils who won tonight, are only five back. The Habs and the Devils meet in Jersey Thursday!

Komisarek and Max Lapierre each had five hits tonight. Begin and Andrei Kostitsyn led in shots on goal with three each. 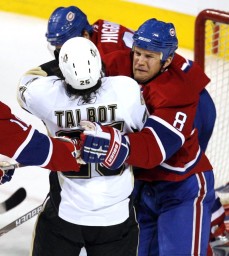 I bring the last point up for purposes of a reality check. The Canadiens can score goals, but games will not be handed to them every night as this one was. Regardless of how they won, or how big the margin was, all it really adds up to is 2 points in the bank.

Alex Auld, with more holes than a piccolo, will not be in goal Thursday!

With an All Star weekend off ahead of them, the Habs players focus might be elsewhere come Thursday night.

It is this game against the Devils, in their arcade, that will truly show where the Canadiens are at, moreso than the rout we enjoyed tonight.

But heck, we have two days to gloat, bask in this slaughers glory, while the Leafs..... aw that's too easy!

This win was just one small piece of the big picture.