Great Deal On A Habs Treasure!

Share All sharing options for: Great Deal On A Habs Treasure!

Dr. Erle Schneidman, an author and collector of Montreal Canadiens memorabilia is offering his 130 page book "The Memorabilia Of The Montreal Canadiens" at a bargain price. The book was initially published in 2000, and Erle recently discovered a case of 50 books that he has offered fans for a low $5 plus shipping.

I jumped on it like Hugh Hefner with a fistful of Viagra on a Playboy Bunny!

I have 2 copies coming my way and I can hardly wait to check them out.

Here is a review of the book written upon publication. Check it out, and if you like what you see, there is information on how to contact Dr. Schneidman at the bottom of the post. 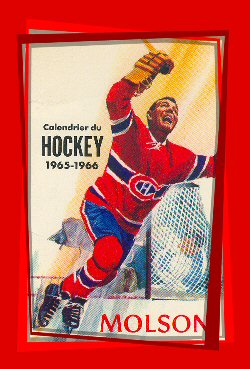 Hockey fans are like any other sporting fans. They follow the sport, and particularly their favourite teams and athletes, with a passion that for some reaches fanatical levels. One thing that hockey fans, be they ardent fanatics or casual observers, can all admit to indulging in is memorabilia, particularly of their favourite clubs or players.

Perhaps no team has generated as much memorabilia over the past 93 years than the Montreal Canadiens, one of the "Original Six" franchises that has been around since before the inception of the National Hockey League.

Proof of the sheer volume of items that have been generated by the Canadiens for fan consumption since the earliest days of the franchise can be found in "The Memorabilia of the Montreal Canadiens by Erle D. Schneidman.

An obvious fan of Les Canadiens, Schneidman tells us in the forward to his book of how his passion for collecting Habs memorabilia grew from a childhood hobby into a vast collection since the 1960s.

In his efforts to organize and catagorize his collection came the idea for this book. With help from fellow Canadiens memorabilia collectors around the world, Schneidman put together a book that is more than just a collection of mementoes of a pro hockey team, but also an interesting look at the history of one of pro sports more colourful teams.

In it's glossy 130 pages, fans can take a walk through a picture history of the Canadiens that for many haven't been seen for decades.

A chapter on postcards dates as far back as the club's inaugural season, with Sweet Caporal cigarette postcards of turn-of-the-century Hall of Famers of Georges Vezina and Newsy Lalonde. One then travels through the decades (although the 1920s are sadly missing) with postcards from such obscure sources as "British Boys" magazine in the 1930s to team issued posed black-and white cards from the 50s and 60s of such stars as Rocket Richard, Jean Beliveau and Dough Harvey, to standard colour head and shoulder colour shots of various Canadiens stars of the 70s and 80s, like Guy Lafleur, Larry Robinson and Ken Dryden, through to player game action shots of 1990s stars like Patrick Roy, Guy Carbonneau and Saku Koivu.

Complete lists are provided listing the players available in each set. Schneidman makes the photo examples interesting by not only showing the top Habs stars of each decade with each set, but also some of the lesser lights ( such as Michel Plasse, Murray Wilson, Claude Larose, Bill Nyrop, Jeff Brubaker, Ed Ronan, and Peter Popovic) who may not be remembered by casual fans, but are bound to evoke strong memories of passionate Habs fans.

A near complete collection of team photos that go back to the 1950-51 season track the evolution of the team throughout history, as a parade of Hall-of-Fame faces appear and disappear as the years unfold. Gazing at the plethora of stars that filled the Habs rosters during those decades, it's not hard to understand why the Canadiens were so dominant for so many years.

There's even a collection of team Christmas cards, most with original artwork that would be suitable for framing and hanging. There are amusing cartoon cards from the mid-1960s, depicting head coach Toe Blake sitting on Santa's knee asking for the Stanley Cup for yet another year, or Santa visiting Blake bringing the Cup, along with the Calder, Vezina, Hart and Prince of Wales trophies. It's a poignant reminder of how winning became such a tradition for Les Canadiens at that time, that it was always expected that the Cup would return annually to Montreal.

Another interesting section is the collection of ticket stubs from notable games and events in the club's history. From their Cup winning games to All-Star games to the final season in the Forum to the Canada-Russia 72 serie and the memorable 1975 New Year's Eve tilt between the Habs and the Red Army, to the 1937 memorial game in honour of Howie Morenz, they provide a keen reminder, not just for those who attended the games themselves, but those who remember hearing them on radio or watching them on TV, of how special those moments were.

Media guides that go back to the 1960-61 season provide another treat for the variety of artwork and photographs of the players that grace the covers of each year. There are also chapters on the plethora of lapel pins and promotional pin-back buttons, some that date back to the early 1950s.

You don't have to be a memorabilia collector to appreciate and enjoy the collection Schneidman and his associates have put together. Whether you're a die-hard Habs fan, or a student of the game's history, "The Memorabilia of the Montreal Canadiens present a fascinating look at the treasure trove of hockey history that the Canadiens have produced over the decades, and it's contributions to the league.