Share All sharing options for: Canadiens Ryde The Lightning 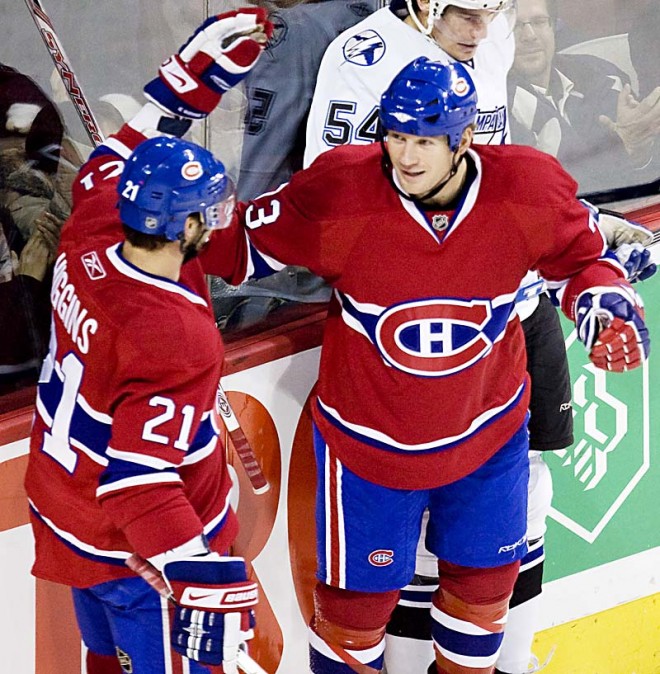 At times it wasn't pretty, but the Canadiens began getting it right in their first home test of 2008.

Through a second period spent spitting and sputtering, the boys in red put it together in the third period and squelched Tampa's comeback bid to earn what I believe will be a turning point win.

Why do I see it as such?

It has to do with character and confidence, and how the team refound the poise to shut down an opponant that had, at the 40 minute mark, turned the tables on them in a game that seemed to getting away from them.

After jumping out to what seemed a comfortable 3-1 lead, lapses and distractions got the better of the Canadiens, and they deserve full credit for grabbing the bulls by the horns in the third period.

Merit must go to coach Carbonneau for assessing exactly what the Lightening would do in the third period, and conveying it loud and clear to his players who executed the game plan.

In all honesty, the coach's job was made easy by the fact that Tampa are a one line team.

Knowing full well that meant seeing Vincent Lecavalier's line for much of the third, Carbonneau paired Mike Komisarek with Roman Hamrlik for containment purposes, and allowed Andrei Markov to play off against the other lines.

The end result was Lecavalier's line going minus three for the third period alone. That the Habs are a team three lines of scoring prowess deep, if and when given the room, and the Lightening are at best a one trick pony, the plan couldn't fail unless the same indisciplines of the second period were allowed to continue.

Where this win mattters in the Habs grand scheme of things, is how the team got seriously focused to railroad Tampa's surge by dividing its weaknesses and conquering. As soon as Andrei Kostitsyn notched the go ahead goal, the Lightening were playing into the Habs hands by overemploying and overextending the Lecavalier line's shifts.

As good as the best player in the NHL is, he cannot win games alone without support. Lecavalier and the Lightening will be deafeated by deeper teams on a consistant basis, and as long as opponants do not fall asleep by taking them lightly, they should reach easy victory.

What the Canadiens need to take as lessons from this game is that focus is not a variable. This one, should have been won 6-2 or 7-1. Break it down to experience for what is still a very young team.

All things considered, no one here, fans or players should be getting too high about this win. On home ice, the Lightening are a team the Habs should have trounced as they did. Despite notching 6 goals in the game, they slayed no beast.

Beat a tougher opponant, then pound your chest!

One player who call this game a benchmark will be the much maligned Michael Ryder, who in the space of a few games has been able to double his seasons goal production.

With his two goals, his first two on home ice, Ryder may have finally booted the monkey off his back - and that can only mean good things.

I'm thrilled for him, and I hope his confidence enjoys an injection of self esteem. Perhaps as a third line player, Ryder will have more success not facing the usual defenders who know what it takes to shut him down. Ryder has suffered this season, and maybe now his struggles can be given a leash. 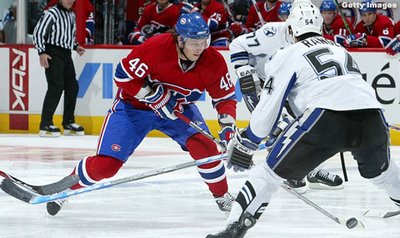 This win, and the recent road swing success, should by now have established that the Canadiens number one line is in fact the trio of Tomas Plekanec - Alex Kovalev - Andrei Kostitsyn.

While Kovalev has practically equalled last seasons goal output, it is his fusing with linemates that impresses me most. Kovalev no longer tries to do it all by himself, and his willingness to employ their talents, as well as his dedication to being sounder defensively, has enabled the entire line to prosper.

Plekanec is a better two way center than most give him credit for. Without Kovalev hogging the puck and taking risks like he did as habit last season, Plekanec has been able to position himseld better and transform plays from all areas of the ice. Last season his points were originated mainly within the opposition's blue line, but thanks to Kovalev's committment deep in his own end, plays originate deeper this season, and Plekanec has been enabled to use his talents in springing his wingers in full stride.

What has been most notable by this change in philosophy, is the importance the line has taken on in the Canadiens overall perspective.

As the line goes - so do the Habs. They are now the Canadiens number one line - without doubt.
Perhaps the biggest benficiary has been Andrei Kostitsyn, who has produced above a point per game ratio in his last eleven, while remaining a constant scoring threat.

I get the feeling we are watching a star player bloom here.

Andrei Kostitsyn reminds me a whole lot of Stephane Richer, who I've always described as a million dollar talent with a ten cent head. Kostitsyn has the same physique, shot, and speed, without Richer's issues. He makes subtle mistakes in each game, but the Canadiens have shown a willingness to let him play through them as he learns. We are seeing the dividends of that judgement as he blossoms.

What the team as a whole needs to focus on now, is that their next opponant is hardly the team they beat tonight. The Washington Capitals have just embarrassed the Conference leading Senators in home and away games.

Coach Carbonneau's prep speech should begin something like - "Remember those 2 points we missed the playoffs by last year - they are at stake tonight!"