Canadiens Rise In The Devil's Arcade

Share All sharing options for: Canadiens Rise In The Devil's Arcade 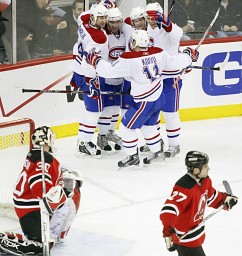 After years of coming away empty from trips to the Meadowlands, the Canadiens have at last won a game in New Jersey - in style, and with panache!

Actually, there were two monkeys removed from the Habs backs tonight, as they not only slammed the door shut on an elongated 1 win in 24 games in Jersey embarrassment, they also came from behind in the third period for the first time all season.

The win should be a big confidence booster for Montreal, and as I see it, the team has turned an extremely big corner with the win.

The Canadiens will be taken seriously from this point on!

It didn't start out good as the Canadiens looked to be falling into the usual Devil's ploys of tight checking trap hockey with few scoring chances. The first period ended 1-0 New Jersey, with the Devils outshooting Montreal 6-3.

Everything seemed to be playing into a pre-written script at this point, but the rest of the game would prove to be anything but.

A short aside: I didn't get to see the game turn. I left midway through the first period, and returned with 9 minutes left in the second. I was attending my wife's uncle George's wake. Our babysitter for the night was my best friend Shawn - an honest to God New Jersey Devils fan! I returned with the score 3-1. I checked NHL.com to see who had scored for the Habs - Smolinski.

I knew the night would only get more strange!

When I returned from the wake, I saw a different game altogether. I saw the Canadiens coming on strong. They were firing from all angles and going to the net hard. I was about to leave to drive my friend home.

Shawn then says, "This is just another boring Devils game."

My friend doesn't like Lou Lamouriello, the trap, and the lack of adventure in a Devil's game. His loyalty to Jersey stems from the Stephane Richer and Claude Lemieux trades, and he likes Brodeur's hybrid standup style of goaltending - yeah, I know...go figure!

As we are getting up to leave, Smolinski pots a second one, and I exclaim, "Whoa, I think we have a hockey game here!"

I remark to my friend about the goal, and how it was scored. 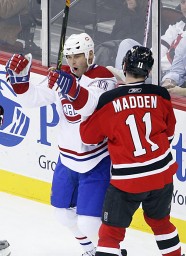 "They're doing something different. They are buzzing the crease, and the shots are coming in low."

Upon more inspection, the Habs were indeed seeming to purposely aim down to create rebounds on Brodeur. There was traffic in front of the net, and the Devils defense were scurrying to keep pace.

This is all nice and good unless there is a follow up, and the Canadiens reinforced all this good work by beating the Devils to the puck.

They were controlling the play, and the shots kept coming.

Shawn had a date, but I was in no hurry to leave. I was liking what I was seeing and wasn't splitting until a commercial break. I told him of a quote I read today, wherein Alex Kovalev said "We really want to win this game bad. If we do, the three day break will be more pleasant."

The drive was but two minutes away. I tuned into the game on the radio as the Habs were on the powerplay.

You gotta love radio announcers. They can make the most subtle scoring chance sound like the golden opportunity of the century. I was so sucked into the drama of a near miss, I drove home quickly but couldn't get out of the car until the PP was over. I sat in the driveway, parked and entranced to screams that Koivu had tied the game - on a shoulder height deflection.

Trust me on this, there is nothing quite as agonizing as listening to a goal being reviewed on the radio. Was it good? Is it legal. I couldn't see for myself to judge, yet I couldn't move. The commentators are playing it for all the drama it is worth, with each one taking an angle.

The description of the referee pointing to center ice was sheer bliss, and I jetted into the house exclaiming something I've already forgotten, and glued myself to the live action on the screen.
As I watched the final 8 minutes of the contest unfold, I saw Habs domination as I'd rarely seen it all year.

I just knew they would win this game. 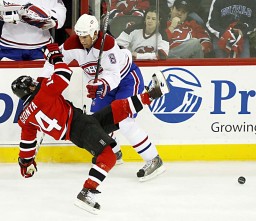 So caught up I was their scoring chances, I was oblivious to the fact that they were in the process of outshooting the Devils by an astouding 20 to 3 margin in the 3rd period.

I was too overtaken seeing Chris Higgins trying to break his scoring slump by putting one in with his ass and heels!
I was totally bowled over watching the line of Alex Kovalev, Tomas Plekanec, and Andrei Kostitsyn play moments of "keep away" with the puck in the Devils zone.

I was blown by the sight of Andrei Markov, Roman Hamrlik, and especially Mike Komisarek, doing to the Devils what Stevens, Niedermayer, and Rafalski had for so long done to the Habs. For a change, Jersey couldn't penetrate our defense.

I wondered for a second, if in the aftermath of this game that I was sure the Habs were now going to win, that the Canadiens players would realize that overall they are a much more talented team than the Devils.

When I say overall, I do mean in the total sum of parts. The Devils have three assets Montreal does not have.

A defensive specialist, and faceoff guru the likes of John Madden.

A team concept dedicated to a defense first system.

As I watched this game unfold I realized that the Canadiens, with their talent could achieve that third asset and surpass it as they have superior talent to the Devils - as long as it works dilligently towards a team goal.

Madden, as good as he is, can only play against one line at a time.

The Canadiens continued to beat the Devils to the puck in the third period. They fought and battled for position in front of Brodeur's net. Instead of slapshots from the point, low wristers kept Brodeur tall, as the Habs pounced on rebounds.

When Chris Higgins pounded home the game winner, with a little more than 5 minutes to go in the game, to me it was simply dogged persistance that had been bound to pay off sooner or later.
From then on, the Canadiens, with a lead in Jersey no less, just seemed so rabidly focussed on what needed to be done, that the win felt uncompromisingly assured in my heart.

I skated in their every step as the seconds wound down - as I'm sure you did as well.

Much was on the line in this game. Lose it, and little changes. Win it, and everything changes!
The Habs confidence will be sky high after this one.

It's a good thing to have three pleasant days off to take it all in. 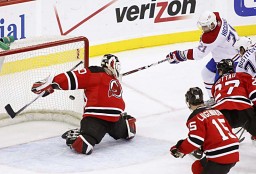 Last season at the All Star break, the Canadiens record was 27-17-5 for 59 points after 49 games. This season after 49 games, the Canadiens are 26-15-8 for 60 points.
On the surface, there isn't a great difference, but on closer examination, it is a whole different world.

At this point last season, a flu epidemic and injuries, especially Cristobal Huet's, conspired to send the Habs down a hellish skid in which they lost 14 of the next 20 games. It would become too much too recover from, despite a surge in the final 12 games.

This season, there are no such viruses in sight, few injuries, and the team is heading into the second half having just exorcised a demon.

Last season we headed towards the trade deadline and ultimately became sellers.

This season, with a good 4 Million to spend on aquisitions, it so far looks like we are headed for the buyers market.

All hopes are reasonable at present. This team, my friends is for real.

They proved it tonight!